The Dark Energy Bomb: A Science Fiction Story
In the year 2030 the long-anticipated problem of Peak Oil had arrived, along with global shortages of various important metals. The world needed much more oil and metals than it was able to produce. But there was one nation which had abundant oil and metal supplies: the nation of Kazmenistan. One day that nation received a demand from the United States that its troops must be allowed to enter Kazmenistan.

President Khalani of Kazmenistan denied that his country was harboring any terrorists, and claimed that the real reason the United States wanted to enter the country was to gain control over its oil and metal resources. He refused to allow US troops to enter Kazmenistan.

A few days later there was an astonishing announcement from the President of Kazmenistan.

“Our great nation has been engaged in a research program which has produced a weapon of unprecedented power,” said President Khalani. “We have harnessed the power of dark energy, the mysterious quantum energy that is the main driver of the universe's accelerating expansion. We have used this breakthrough to create a dark energy bomb. The bomb is so powerful that if it is ever exploded, it will shatter into pieces our entire planet, destroying all life on it. If the United States enters our nation with its troops, we will detonate our dark energy bomb, killing all life on this planet.”

At the White House when the President of the United States heard about this announcement, he was very scornful and skeptical.

“Give me a break – a dark energy bomb?” said the President. “Do these guys really expect us to swallow that story?”

“It's probably just a bluff – but maybe it's for real,” said Donald Whitehead, the White House science adviser. “If people were ever to harness the power of dark energy, they probably could make a bomb that could blow up the whole planet.”

“What is dark energy, anyway?” asked the President.

“The astronomers say that 68 percent of the mass-energy of our universe is dark energy,” said Whitehead. “Scientists don't know exactly what dark energy is, but they believe that it is produced by quantum effects in ordinary space. Every second quantum uncertainty causes particles called virtual particles to appear everywhere. These virtual particles only last a tiny fraction of a second, but there are so many of them in every unit of space that every cubic meter of ordinary space supposedly has a huge amount of dark energy associated with it.”

“Suppose someone found a way to manipulate a vacuum so that the virtual particles in it stayed around for a few seconds, rather than lasting only a tiny fraction of a second,” speculated Whitehead. “That would unleash the power of dark energy lurking in ordinary space. The explosive effect would be unbelievable. It might well be enough to blow up the entire planet.”

“But these guys in... in...what's it called again?” said the President.

“These guys in Kazmenistan couldn't have the science needed to create this type of bomb, could they?” asked the President.

“Our intelligence indicates that the capital city of Kazmenistan has various research centers capable of advanced scientific research,” said the director of the CIA.

“Then maybe it isn't a bluff,” said the President.

Heated discussions went on for days in the Oval Office of the White House. Finally the President made a fateful decision. He decided to launch a surprise nuclear attack on all the cities of Kazmenistan. The President solemnly announced his decision to his main military leaders and cabinet leaders.

“My science adviser tells me that if Kazmenistan really does have a dark energy bomb, it could blow up the entire planet,” said the President gravely. “We can't take any chances. We are launching today a full scale nuclear attack that will wipe out all possible places where this dark energy bomb might be in Kazmenistan. It's going to be a surprise attack, so they won't have time to sneak their dark energy bomb out of the country.”

The attack was launched with devastating effect, using ICBMs and nuclear missiles launched from Trident nuclear submarines. All of the cities of Kazmenistan were destroyed. The nuclear fallout killed millions outside of the cities. 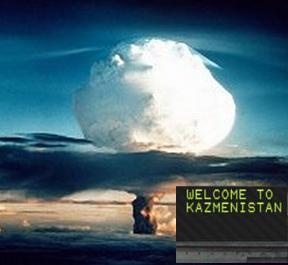 A few hours after the attack, the President of the United States sat glumly in the Oval Office of the White House, along with his national security adviser and chief of staff.

“I guess it will be a long time before we can access their oil and metals, with all the radiation left from the attack,” said the chief of staff.

Then a young aide entered the Oval Office.

“Mr. President, you should read this,” said the aide. “It's the last message sent from the President of Kazmenistan before our nukes hit the country. Sorry about the delay in getting this message to you, but it was hard to translate their language.”

The President and the national security adviser read the message together. It said this:

I am sure you are far too intelligent a man to have believed for a moment our ridiculous story about a dark energy bomb that could destroy the world. It was, of course, a complete bluff, without any truth whatsoever. Since our story has failed to persuade you to change your plans, we have no choice but to agree to them. Your US troops may enter our country at any time. We will cooperate fully.

At a loss for a sentence, the President resorted to a one-syllable response: “Oops.”

The President's national security adviser ripped up the note into a hundred pieces, and then said: “This message never was written.”