The Boy Who Had Not Seen the Sky: A Science Fiction Story

The Boy Who Had Not Seen the Sky: A Science Fiction Story
“Tell me about the planet Cyton we're heading to,” said Ted, age 9.

“It's the most beautiful planet in the galaxy,” said Ted's Dad. “It's full of gorgeous waterfalls and incredible canyons and stunning cliffs and astonishingly beautiful mountains. There are all these great ponds you can swim in, with clear pure water that is the temperature of bathwater. There are three moons in the sky, and two suns in the sky, and you'll see the most glorious double sunsets.”

“It's like – oh, I should just show it to you on our video screen,” said Dad. He showed the child a picture of a sunset.

Ted lived in these rooms with his father and his mother. Like every small child, the young boy had many questions for his parents. One day Ted asked his father a question.

“Dad, how come our spaceship doesn't have a window that lets us look out at the stars?” said Ted.

“That's because of cosmic rays,” said Dad. “Cosmic rays are harmful radiation that give people cancer, and we don't want that bad stuff getting through the window. But you can see the view from our spaceship on the video screen, like I showed you before.”

Another day Ted had a question for his mother.

“Mom, why did they pick our family to go on this spaceship to the planet Cyton?” asked Ted.

“Well, uh, that's...that's...quite an interesting story,” said Mom. “It all happened like this. They had a great big contest back on planet Earth. Yes, that's what it was... a contest. They had many families participate in the contest all over the world. It didn't involve pure luck, I'll have you know. We had to do things. We had to dive deep in the water, and jump through hoops of flame, and run real fast, and climb way up trees. Now, your father and I did better at the contest than anyone else. So we won the contest. And the prize was: a trip on this space ship to the most beautiful planet in the galaxy. But because the spaceship was very small, we were the only ones who could go on it. So your Dad and I blasted off in the spaceship, and while we were traveling through space, I became pregnant with you.” 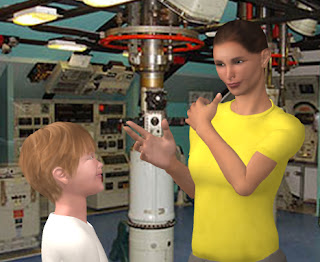 “When we get to the planet, will life be very hard?” asked Ted.

“Uh... um... it's voice activated, which means I just have to say the password, and it will open up,” said Mom. “But don't worry, I won't forget the password. Now I've been there inside the Huge Storage Area, and you wouldn't believe the things they have inside there. There's a self-assembling house in a box. We just have to press a button when we get to the planet, and we'll watch the house build itself. It will be a great big beautiful house for us all to live in.”

“What other things do they have in that Huge Storage Area, Mom?” asked Ted.

“Why you wouldn't believe it, they have a self-assembling swimming pool,” said Mom. “When we get to the planet, we'll just a press a button, and the swimming pool will assemble itself. Then there's an antigravity device you'll be able to strap on your back like a backpack. Once you have that on you, you'll be able to fly around like a bird. Then there's a big shiny truck we can use to drive all around the planet very conveniently.”

“What kind of animals do they have on the planet, Mom?” asked Ted.

“Mostly animals like the ones you've seen in your picture books,” said Mom. “Lots of horses and dogs and fluffy rabbits and adorable cuddly panda bears. They're all very gentle, and you'll have a great time playing with them.”


“Wow, I'm gonna have so much fun when we get to that planet,” said Ted.

The boy drifted off to sleep.

“You were laying it on pretty thick,” said Ted's Dad.