Young Eddie, age 10, was tired of putting on clown makeup every day of his life, just like his friends, his family, and everyone he knew.

One morning he went to eat breakfast, and his mother greeted him. She was wearing clown makeup all over her face, consisting of white greasepaint, two bright red circles on her cheeks, a bright orange nose, and blue triangles above and below each of her eyes.

“Now, Eddie, you know you're supposed to put on your clown makeup before breakfast,” scolded her mother.

“I'm sick of putting that stuff on,” said Eddie. “It makes my face too hot, and it smells. I'm not going to wear any clown makeup today.” This comment was heard by his father, who also wore clown makeup all over his face.

“Now don't be silly, Eddie,” Eddie's father said. “As soon as you're finished breakfast, I want you to march into your bedroom and put on your clown makeup just like you do every day.” 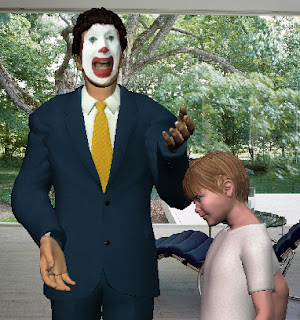 After breakfast, Eddie decided to leave the house by himself and go walking around town without wearing his clown makeup. His mother noticed he was gone, and went outside. She noticed a neighbor who was gardening.

“Did you see my boy Eddie?” she asked.

Eddie's mother called the police and told them of the situation.

The police sent out an announcement to all the squad cars: “We have a young boy aged 10, who is walking around town without wearing his clown makeup.” The police cars started looking for such a boy.

Eddie picked up a newspaper and used it to cover his face. He hoped that this would allow him to walk around a while without anyone noticing that his face looked different from that of everyone else. He was the only one in town who was not wearing clown makeup.

Eddie went to the park and found a patch of woods he could play in. He spent hours playing by himself. Eventually he was spotted by two police officers who were walking nearby.

“I think that's him: that runaway kid who's running around face naked,” said the first police officer. The two clown-faced officers ran after the boy and finally caught him.

“So little boy, you've had quite the little adventure, haven't you?” said the first officer. “But how long do you think you could get away with strolling around like that, with your face as bare as it was on the day you were born?”

The two officers took young Eddie back to his worried parents, who promised that the boy would be punished, and lectured on why he simply could not be allowed to stroll around town without his clown makeup.

Dad and Mom took Eddie into the living room to give him a stern lecture.

“But why?” asked Eddie. “Why do I always have to wear that smelly old clown makeup every day?”

“Because everyone else wears it,” said Mom.

“You know something, son?” said Dad. “You're right, it's not. So I should explain the real reason why it's absolutely necessary to wear your clown makeup every day. It's a bit complicated.”

“Several decades ago the world had a serious problem called global warming,” said Dad. “The pollution of human society was causing Earth's temperature to get hotter and hotter. Finally the scientists decided to do something about it. They started to tinker with our planet to try and make it cooler. They called this tinkering they were doing geoengineering.”

“The scientists started doing lots of things to change the atmosphere, to try to make the Earth cooler,” explained Dad. “It was some kind of very scientific stuff I don't understand. But the plan worked, more or less. The geoengineering stopped global warming, and Earth stopped getting hotter.”

“But what does that have to do with why I have to wear clown makeup all the time?” asked Eddie.

“What is the oh-zo layer?” asked Eddie.

“It's the ozone layer,” said Dad. “The ozone layer was this great layer of gas in the atmosphere which protected we humans from all the harmful ultraviolet radiation from the sun. Long ago, people didn't have to wear clown makeup. They could stay outside for hours without getting hurt by the sun. But the geoengineering work done to fight global warming ended up destroying the ozone layer. So now everybody has to wear clown makeup to protect our skin from the sun's ultraviolet radiation.”

“Aw, Dad, I don't understand all this scientific stuff,” said Eddie. “You're making my head hurt.”

Eddie was disappointed by his Dad's talk, but a few weeks later Mom reported some good news.

“I heard on the TV that the geoengineers are going to restore the ozone layer,” said Mom. “They're going to make a bunch of machines to send up ozone into the atmosphere. If it works, in five years we won't have to wear clown makeup any more.”