Superior Species: A Science Fiction Story
On the distant planet Nydor there was a civilization that had made great progress in technology, having recently developed rockets, television, and computers. But in one respect this culture was very backward: it still had the institution of slavery. All of those with black skin served as lowly slaves, serving the white-skinned majority. The government taught that this was the proper order of things, saying that the black-skinned people were all inferior.

The scientists of Nydor began to develop the rockets they would need to travel to Selnia. But they knew that to get funding for the expedition, they would have to ask the ruler of their planet, who was known as the Planet King.

“Why should I give you all this money you are asking for?” asked the Planet King.

“Great Lord, you are the ruler of all our planet,” said the expedition organizer. “But if we explore the third planet, Selnia, then one day your dominion may be increased, and you can be the ruler of two planets. Also, perhaps we will find black-skinned people on this planet, who we can bring back in chains to our planet, to serve us as slaves.”

The King was thereby persuaded to fund the great mission. A great interplanetary rocket ship was built in orbit. From a list of 1427 applicants, three pale-skinned men were chosen to go on the mission: Alor, Dren, and Velnus.

To the cheers of ten thousand watchers, a rocket ship launched the three men into space. Their ship docked with the orbiting interplanetary craft designed to take them to the third planet Selnia.

“Looks like we won't have much room to move around in this craft,” said Alor. “But we won't have to put up with these cramped conditions for long. In three months, we'll get to Selnia.”

Burning its rocket engines, the interplanetary ship went off to Selnia. Two months into the voyage, the ship's radio antenna was destroyed by a micro-meteorite, a tiny piece of rock traveling at high speeds.

“That kills our radio,” said Alor. “We'll just have to tell them what we discovered when we get back.”

After a three month voyage the ship reached orbit around Selnia, the third planet. Alor and Dren moved into a landing craft that would travel to the surface of the planet. Velnus stayed behind, manning the interplanetary ship as it orbited Selnia.

The landing craft landed successfully. Alor and Dren took a few readings with their instruments.

“The atmosphere is just like our planet,” said Alor. “We won't even need to wear space suits.”

The men got out of their landing craft, and began exploring. They were soon greeted by intelligent black-skinned beings, who spoke some language Alor and Dren couldn't understand.

“Dren, they've managed to learn our language in only three weeks,” said Alor. “What do you think that means?”

Alor began to ask some questions of the local mayor of the black-skinned Selnians.

“Do you have any king who rules over you?” asked Alor.

“No,” said the mayor. “Here we follow democracy. We elect our own leaders, who serve no more than two years.”

“But what about religion?” asked Alor. “On our planet, the king is not only our political leader but also our spiritual leader, who commands us what to believe about God.”

“We have no spiritual rulers,” said the mayor. “On our world each person believes as his own reason compels him, not because any authority compels him to do so.”

“Do you keep any slaves?” asked Alor.

“Is there war on your planet?” asked Alor.

For several weeks Alor and Dren studied the culture of the black-skinned Selnians, and the men learned all about a society which was far more advanced than the society Alor and Dren had come from.

Finally the two men returned to their landing craft, and blasted off. They docked with the interplanetary craft orbiting Selnia, which then set off to return to the second planet Nydor, their home world.

“Just wait until the people at home hear about what we've discovered,” said Alor. “This will change everything. The winds of change will start blowing.”

“So tell us, what did you find on the third planet, Selnia?” asked the assistants. “Were there any black-skinned creatures we can bring back to our planet in chains?”

“You won't believe it!” said Alor. “The third planet is inhabited by a black-skinned race. And the amazing thing is: they are superior to us in every way. They are much smarter than us. They follow democratic ways. They have no slaves. They have an egalitarian society, with equality for everyone. They have a more intelligent approach to religion. They have neither war nor crime. Their technology is far more advanced than ours. This black-skinned race has so much to teach us! They are far better than we are.”

The assistants reported these findings to the Planet King. There was a five hour delay.

Finally the king's assistants returned and spoke to the astronauts.
“Good news,” said the assistants. “You will be flown to see the Planet King himself. He wants to hear all about your findings.”

The three happy astronauts got in an airplane, which took off into the sky. After flying for twenty minutes, something very surprising happened, while the plane was passing over a mountain range. The pilots of the plane put on parachutes, and jumped out of the plane.

“What the hell did they do that for?” asked Alor. The three astronauts went to the cockpit of the plane, and tried to fly the plane themselves.

As the Planet King had commanded, the airplane had been deliberately supplied with only a tenth of the fuel needed to reach its destination.

“Glide it, we'll have to do a crash landing!” said Alor. 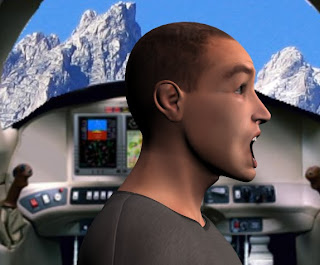 But soon the plane approached a mountain. The astronauts tried to steer the plane away from the mountain, but without any fuel, they didn't succeed.

The plane crashed into the mountain, killing all three astronauts in a giant explosive fireball.

A representative of the Planet King announced the results to the public.

“The Planet King is very saddened by the most tragic death of his heroic astronauts,” said the representative. “They died in an accident while traveling to the King to report the results of their expedition. But from their spaceship's records we have been able to determine what they discovered on the third planet, Selnia. They discovered only plant life and some small animals, but no signs of any intelligent life.”

“It was unfortunate that I had to take such drastic action in regard to those astronauts, and give the command which led to their deaths,” said the Planet King. “But I really had no choice. It was unthinkable that my subjects should learn that some other race was more advanced and more intelligent than our race. Think of how it would have undermined faith and weakened the people's confidence that I am their rightful ruler in all matters political and spiritual. And for the people to have learned that a black-skinned race was superior to our own – that would have caused an upheaval in people's thinking that might have shattered my rule and overturned our institutions.”

“You did what you had to do, wise ruler,” said the chief adviser. “Our holy sacred institutions such as slavery must be preserved at all costs.”

A few minutes later, one of the king's ministers came into the room.

“Great ruler, something astonishing has happened,” said the minister. “Our scientists have detected a huge spaceship coming from the third planet, Selnia. It is heading for our planet. It is a thousand times larger than the spaceship we sent from our planet to Selnia.”

The Planet King's jaw dropped, and his open-mouthed expression persisted for several seconds. He then covered his face with his hands.

“So what do we do now?” asked the chief adviser. “Planet King, you told everyone there is no intelligent life on Selnia, and that all of the black-skinned are inferior. So how do we explain it when the superior black-skinned Selnians land on our planet?”

The Planet King had tried to bury the truth, but now the truth would bury him.