“Vacuum Catastrophe” Should Be Called the Vacuum Miracle

We tend to think of science as something that gives us the right answers. Almost always science does give us the right answer. But there is at least one case when science gives us the wrong answer – a really, really wrong answer. In fact, there is one case in which science gives us an answer wronger than any answer that you ever gave in school, even on those tests when you wrote wild guesses on your exam sheet because you had daydreamed through every class session.

The wrong answer given by science is the answer that it gives to the question: how much energy is in a vacuum?

A person not familiar with quantum mechanics tends to think of a vacuum as being just empty space. But according to quantum mechanics, empty space is not really empty. It is instead a seething froth of very short-lived particles called virtual particles. A virtual particle with mass is a particle that pops into existence and then pops out of existence a tiny fraction of a second later. Scientist think that the vacuum is filled with virtual particles corresponding to every type of actual subatomic particle that has been discovered. For example, they think that the vacuum includes incredibly short-lived virtual electrons, and incredibly short-lived virtual quarks (because both electrons and quarks are known types of subatomic particles).

You can get an idea of the modern concept of the vacuum by looking at the animation below. Each of the fleeting little specks represents one of the virtual particles that pop into existence, disappearing a fraction of a second later.

Imagine if there was a weird rule in your living room that every second 10,000 fireflies had to pop into existence, but that each of them would disappear a fraction of a second later. You might then then see in your living room these weird little streaks of motion and flashes that would be the signs of short-lived fireflies existing for an instant before disappearing. Scientists think that the vacuum of space is a little like that, except that the fireflies are subatomic virtual particles, so we can't see anything like the streaks and flashes.

Quantum field theory allows us to calculate how much energy there should be in the vacuum of space because of these virtual particles. The problem is that when scientists do the calculations, they get a number that is ridiculously wrong. According to this page of a UCLA astronomer, quantum field theory gives a prediction that every cubic centimeter of the vacuum should have an energy density of 1091 grams.  This number is 10 followed by 90 zeroes. That is an amount trillions of times greater than the mass of the entire observable universe, which is estimated to be only about 1056 grams.

This means that according to quantum field theory every cubic centimeter of empty space should have more mass-energy than all the mass-energy in the entire observable universe.

As Professor Strassler puts it:

To say this another way: even though it is possible that there is a special cancellation between the boson fields of nature and the fermion fields of nature, it appears that such a cancellation could only occur by accident, and in only a very tiny tiny tiny fraction of quantum field theories, or of quantum theories of any type (including string theory).  Thus, only a tiny tiny tiny fraction of imaginable universes would even vaguely resemble our own (or at least, the part of our own that we can observe with our eyes and telescopes).  In this sense, the cosmological constant is a problem of “naturalness” as particle physicists and their colleagues use the term: because it has so little dark energy in it compared to what we’d expect, the universe we live in appears to be highly non-generic, non-typical one.

What is the proper term for an incredibly improbable but fortunate occurrence? The term is miracle. One definition of miracle is simply a very fortunate but very unlikely event, as in “the miracle of the jet landing on the Hudson River,” or “the miracle that no one was killed by the bomb.” 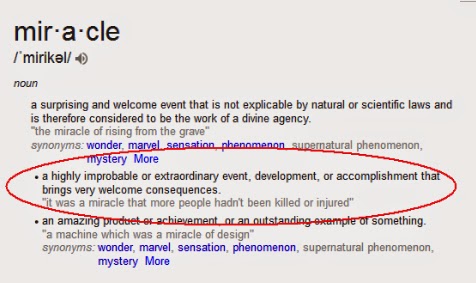 So rather than referring inappropriately to the “vacuum catastrophe,” as scientists do, we should be talking about the vacuum miracle by which a vacuum that is supposed to be super-dense turns out to be not dense at all.