Galaxy Spin Bias: A Page From the Cosmic “Book of the Damned”

Charles Fort was a writer who wrote four books describing strange inexplicable phenomena. One of these books was called The Book of the Damned. For example, he discussed alleged cases of teleportation, poltergeist activity, mysterious disappearances, inexplicable spontaneous fires, UFOs, ball lightning, and cases of fish, frogs, and organic material mysteriously falling from the sky. The title refers to phenomena that have been “damned” in the sense of being excluded from consideration by modern scientists, because the phenomena fall outside of their theories. Fort's works were so successful that nowadays the term “Fortean” is used for such hard-to-explain phenomena. An entertaining web site that discusses such phenomena is http://www.unexplained-mysteries.com/.

All spiral galaxies rotate. A spiral galaxy can either rotate in a clockwise direction or a counter-clockwise direction. The directions are called either left-handed or right-handed, depending on the side to which the bottom spiral arm is pointing. In the picture below, we see the difference between the two types of spin. 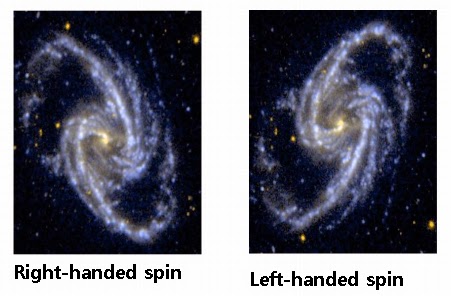 Physicist Michael Longo and his helpers studied more than 15,000 galaxies to determine which direction they were spinning (something that seems like the most tedious assignment imaginable). The end result was very surprising. Instead of finding that spiral galaxies always spin in one direction 50% of the time and the other direction 50% of the time, Longo found that in some parts of the sky galaxies prefer to spin one way or the other significantly more frequently. 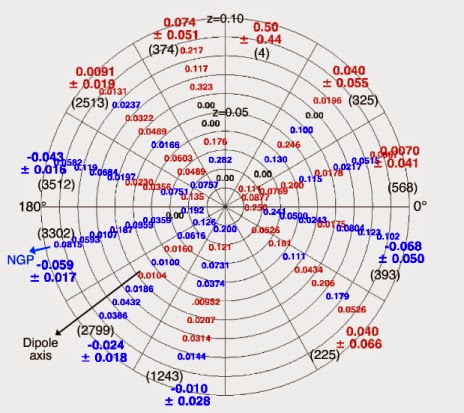 While it may seem small, such a 7% preference is really huge, when one considers the law of large numbers, which dictates that when you have very many trials (such as more than 1000) the deviation from the expected chance result should be very, very small. The law of large numbers dictates, for example, that if you flip a coin 10,000 times, there is only the tiniest chance that the number of “Heads” flips will be more than 51%.

There is no easy way to reconcile Longo's finding with the prevailing assumptions of modern astronomers. So when Longo's results were announced, scientists took the convenient route of thinking: we'll just ignore this, because after all, it's only one study.

But then the next year scientist Lior Shamir produced a scientific paper presenting the results of a much larger analysis on spiral galaxy spins. Shamir analyzed 126,501 galaxies, and found that the effect reported by Longo is very real: spiral galaxies prefer to spin in a left-handed direction in a particular direction of the sky. The degree of preference is about the same reported by Longo, about 7%.

How could such a thing be happening by chance? There has been talk that a “rotation of the entire universe” might be an explanation, but the suitability of such an explanation is very questionable, and the idea of a rotating universe doesn't fit in with prevailing astrophysical theories.

Faced with a second scientific paper showing this mysterious anomaly that spiral galaxies prefer to spin in one direction, did scientists start giving this matter great attention? No. They pretty much continued to ignore the anomaly, putting the finding in the cosmic “Book of the Damned,” where the finding continues to attract almost no attention.
Posted by Mark Mahin at 11:26 AM