Cal Tech physicist Sean Carroll just released a scientific paper entitled In What Sense Is the Early Universe Fine-Tuned? Since Carroll has taken on a part-time role as a worldview warrior, trying to throw cold water on anyone suspecting that the universe is not the result of pure blind chance, I suspect that some with similar views must have started to read the paper hopefully, thinking to themselves: now finally here is someone who will debunk all that talk about the early universe being extremely fine-tuned.

Fine-tuning basically means “fitness for an end,” and the term is used by both scientists and philosophers nowadays in a religiously neutral sense. Using the term fine-tuning does not semantically imply belief in a fine-tuner (although if one is discussing a sufficiently improbable case of fine-tuning that might, arguably, bring to mind the notion that such a fine-tuner once existed). When people talk about fine-tuning of the early universe, they mean the idea that the early universe had some arrangement of matter and energy (or evolutionary trajectory) that was highly improbable, something that was conducive to the eventual appearance of creatures such as us. Discussions of the fine-tuning of the early universe are discussions of the way the universe was about 13 billion years ago, around the time of the Big Bang, when the universe was very, very hot and dense. Cosmic fine-tuning is also discussed in a different context, the observation that the universe's fundamental constants and laws are improbably suitable for the existence of intelligent life. That's a fascinating topic discussed here, but in this post I will discuss only the first type of fine-tuning.

Rather than thinking of fine-tuning in the early universe in terms of a horizon problem or a flatness problem, Carroll suggests that it should be considered in terms of smoothness and trajectories. We know that the early universe was incredibly smooth. About 380,000 years after the Big Bang, the universe was uniform to 1 part in 100,000. We know that from the cosmic background radiation, which has no lumps greater than 1 part in 100,000. You may get the wrong idea by looking at one of those maps of the cosmic background radiation that show different colors. Those maps are amplifying differences of only 1 part in 100,000. A map of the cosmic background radiation that does not use such an amplification would consist of a single color (see the visual below). 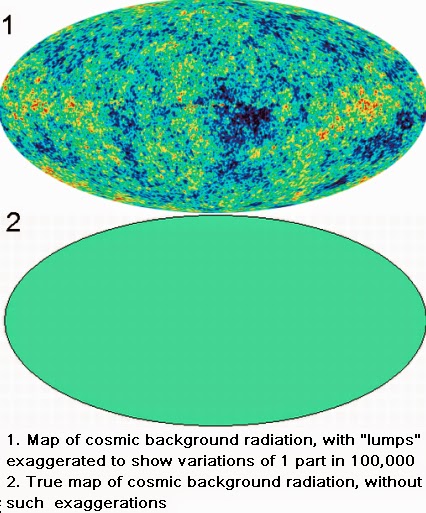 But such almost perfect smoothness, Carroll points out, would not occur in more than the tiniest fraction of the trajectories that the universe might have had after an event such as the Big Bang. How small is that fraction? On page 21 of the paper Carroll estimates that “the total fraction of the trajectories that are smooth at early times” is very roughly 1 in 10 to the 66 millionth power. That's a fraction equal to 1 in x, where x is 10 followed by 66 million zeroes.

How low is this probability of 1 in 10 to the 66 millionth power? It's a probability much less than the probability of you filling up a huge dump truck with many thousands of dice, having the truck dump the dice gradually along a road, and then finding that each and every one of the dice landed on the road coming up showing the number 6 (with no 1's, 2's, 3's, 4's, or 5's showing anywhere on the road). It's also a probability much less than the probability of you guessing the birth date (month, day, and year) of every person you ever met, and you guessing the correct birth date each and every time throughout your life.

Carroll says of his estimate, “This represents a very conservative estimate for the amount of fine-tuning involved in the standard cosmological model.”

Does the theory of cosmic inflation eliminate this fine-tuning? Carroll says:

Inflation, therefore, cannot solve this problem all by itself. Indeed, the measure reinforces the argument made by Penrose, that the initial conditions necessary for getting inflation to start are extremely fine-tuned, more so than those of the conventional Big Bang model it was meant to help fix.


Carroll refers to the famous cosmologist Sir Roger Penrose, who made an argument (based on entropy) that the early universe required fine-tuning even more improbable than the microscopic probability listed by Carroll.

We can therefore conclude that the smoothness of the early universe does indeed represent an enormous amount of fine-tuning... The real sense in which the early universe was fine-tuned is extremely simple: the overwhelming majority of cosmological trajectories, as quantified by the canonical measure, are highly nonuniform at early times, and we don’t think the real universe was like that. Clearly, the specific numerical value we obtain is not of central importance; what is certain is that the history of our actual universe does not look anything like it was chosen randomly.


I can give a very crude analogy of how mind-boggling this is, one involving a trajectory and smoothness. Imagine you are walking along carrying a white poster board. You walk by a big muddy hole in the street. A big truck speeds by, driving over the muddy hole. Splat! A big blob of mud hits your poster board. Later you analyze the mud splat, and find that the distribution of mud is uniform to one part in 100,000. It's as if someone very carefully sprayed on the mud with a spray can, but even more orderly. How the hell could that have happened?


The fact that this result (1 chance in 10 to the 66 millionth power) has been advanced by Sean Carroll may make it all the more compelling, as Sean Carroll (a champion of naturalism) is the type of thinker one might expect to be hostile towards any conclusion of cosmic fine-tuning. Professor Carroll's naturalism forbids him from philosophically connecting the dots in regard to this and other cases of cosmic fine-tuning, but it is not obvious that others should conform to such a prohibition.
Posted by Mark Mahin at 9:25 AM