When an Apparition Is Seen by Multiple Observers: 17 More Cases

Apparitions have been by humans throughout history. Skeptics claim that such apparitions are just hallucinations. But there are two reasons for rejecting such a theory. The first reason is that there are very many apparition sightings in which a person sees an apparition of someone (typically someone the observer did not know was in danger), and then later finds out that this person died on the same day (or the same day and hour) as the apparition was seen. We would expect such cases to be extremely rare or nonexistent if apparitions are mere hallucinations, since all such cases would require a most unlikely coincidence. But the literature on apparitions shows that it is quite common for an apparition to appear to someone on the day (or day and hour) of the death of the person matching the apparition. See here and here and here and here for 100 such cases.

First, I'll describe the appearance of an apparition without human form (almost all of the other cases will involve apparitions with a human form).  On page 28 of the fascinating book Experiences in Spiritualism with Mr. D. D. Home, which can be read here,  we read this account by the viscount Adare, who describes what he saw after experiencing "our beds vibrating strongly" and "raps on the furniture, doors, and all about the room":

We both saw in exactly the same spot, a perfectly white column, it can scarcely be called a figure, as the shape was indistinct. It moved from the dressing table toward Home's bed. Home said he saw a white object about the size of a child floating near the ceiling above his head. I saw it also, but it appeared to me to be in mid air, half way between the bed and the ceiling; it was floating about in a horizontal position; it was like a small white cloud without any well-defined shape...It then slowly floated to the foot of his bed and disappeared.

Below are some cases from Volume 2 of the classic work on apparitions, “Phantasms of the Living,” which you can read here. I will use the case numbers given in the book. You can click on the links to go the exact page I refer to.

Page 612, Case 659: A person and his sister were surprised to see at the person's bedside the person's brother, who was believed to be far away doing a job for a reigning prince.  Three weeks later word came that the brother "had died the same night, and the same hour."

Page 613, Case 660: Two brothers were in bed when they both saw the apparition of a lady to whom their father was engaged. She died suddenly that same night.

Page 615, Case 662: Between 6 and 7 o'clock, a woman, her brother and her mother all saw Ellen, the woman's sister.  The woman "tried to catch hold of her, but seemed to catch nothing." The next day they found out that Ellen had drowned to death "a little before seven" on the same they saw the apparition.

Page 617-618, Case 665: Two brothers woke to see standing between their cots the figure of their father. When one of the brothers rose up, the figure vanished.  They later found that their father had died at the same hour.

Page 622, Case 667: Four people were startled to see an apparition that disappeared just after a woman screamed, "He's dead."  Word later arrived that a person corresponding to the apparition had been murdered on the same night.  The account says, "his spirit appeared to his wife, his child, an elder sister, and myself."

I will now discuss a case that appears on page 259 of "Phantasms of the Living," as  case #357. But a much earlier source for the sighting is the fascinating and very long 1872 book "Footfalls on the Boundary of Another World" by Robert Dale Owen.  On page 383 the book tells us the following narrative. On October 15, 1785, seeing someone while in America, John Sherbroke brought the sight to the attention of Colonel Wynyard, who identified the person as his brother, John Wynyard.  "Both remained silently gazing on the figure," we are told by Owen. Owen later says Sherbroke later received a letter "begging Sherbroke to break to his friend Wynyard the news of the death of his favorite brother, who had expired on the 15th of October, and at the same hour at which the friends saw the apparition."  Two and a half years later John Sherbroke saw someone who he thought resembled the figure he had seen when the “apparition sighting” occurred. The man turned out to be a man who looked so much like John Wynyard that he had been previously mistaken for him.

On page 377 of the same book by Owen, we have a case of an apparition seen by multiple witnesses. A British Lord traveled away from London, leaving his wife there. While in the Scottish Highlands, he saw an apparition of his wife. Ringing for his servant, the man asked the servant what he saw. The servant replied, "It's my lady!"  The wife had died in London that night.  About a year later, the man's daughter exclaimed that she had seen her deceased mother.  The daughter died on the same night from an illness.  Owen said he received the account in writing from a member of the man's family.

On page 387-391 of the same book by Owen, we have the account of an apparition seen by Baron de Guldenstubbe in 1854. The Baron reporting seeing the apparition at length. Later he questioned people involved in maintaining the property, and found that two others had seen the same apparition, one of them several times. The account was told to Owen by the Baron.

On page 398 to 401 of the same book by Owen, we have an account of an apparition seen repeatedly by Madame Hauffe, and also seen once by a forest ranger name Boheim, who said he saw a gray cloud turn into a human form.

On page 417 to 424 of the same book by Owen, we have a discussion of a dramatic case Owen investigated through interviews with the two witnesses.  A Miss S. saw an apparition of two strange figures several different times, who identified themselves as having a last name of Children. Later a Mrs. R. reported seeing the same two figures,  with the luminous letters "Dame Children" above the female figure.  It was later discovered that a family with the last name of Children had once lived in the house where the apparitions were seen.

In Camille Flammarion's book "The Unknown," on page 178 (case CLXXVIII) we read that  Minnie Cox reported seeing in 1869 an apparition of her brother, who was far away in Hong Kong.  This occurred an hour after the brother's son (living with Minnie) had reported seeing his father. The next mail which came from China informed her of her brother's death, which had happened on the same day Minnie had seen the apparition.

A very well-documented case of an apparition seen by multiple observers is the case of the Cheltenham ghost.  Between 1882 and 1886 several observers saw inside and around a particular house an apparition of a mysterious figure in black, who would often be seen with a handkerchief over her face. Rosina Despard saw the figure more than five times.  You can read here the lengthy written testimony of Rosina and the written testimony of several other witnesses who saw the apparition (or use this link to get the same account from page 311 of Volume 8 of the Proceedings of the Society for Psychical Research). Rosina testified to "the sudden and complete disappearance of the figure, while in full view" (page 321).  Describing a sighting of the same figure, Edith Morton said, "suddenly I felt a cold, icy shiver, and I saw the figure bend over me" (page 325).  W.H.C. Morton testified to seeing the figure three times. An F.M.K. also reported seeing the figure. An M.E. Brown reported that she and someone else saw a "dark, shadowy figure, dressed in black, and making no noise, glide past us along the passage and disappear round a corner" (page 327), and that she saw the mysterious figure twice more (page 328).

Perhaps the most famous ghost in history was the mysterious phantom figure of Katie King.  As I describe in this post, the figure was seen by many people over the course of two years, such as the distinguished scientist William Crookes (discoverer of the element thallium).  In that post I quote four different books by four different contemporary authors containing eyewitness testimony of sightings of the mysterious Katie King.  In three of these cases, it's the author of the book who gives part of the eyewitness testimony citing observations of the mysterious figure. Similarly, as described here, the phantom figure of Bien Boa was seen by multiple distinguished witnesses, one a Nobel Prize winner.

A much more recent case of an apparition seen by multiple observers is the case described by John G. Fuller in his book The Ghost of Flight 401. On page 138 to 139 he describes three witnesses (a flight captain, a stewardess and a flight supervisor) seeing in the first-class section of the aircraft a silent figure dressed as an airline pilot, a figure who wouldn't respond to questions. "My God, it's Bob Loft" said the captain, referring to an airline pilot who had died not long ago in an airline crash that had killed more than 100 passengers. Then, according to Fuller:

The captain in the first-class seat simply wasn't there. He was there one moment -- and not there the next.

The aircraft was searched, but the figure was never found. 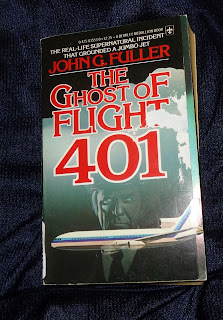 In the scientific paper here,  researchers found that 39 out of 84 apparition witnesses reported that someone else present shared their experience.  The authors of the paper attempted to track down how many people could corroborate such reports. Nine such people had either died or could not be tracked down, leaving 30 left. The authors stated, "In 21 instances out of the 30, the witnesses verified the respondent’s description of the case."

Such cases sometimes occur in recent years. For example, on pages 4-6 of the 2018 book Already Here by Leo Galland M.D., Leo tells us that while waiting to hear the fate of his son "three hours away" after an accident, both he and his wife saw an apparition of that son. In the same hour of that day, Leo learned that attempts to revive his son had failed.

Quite a few additional cases of apparitions seen by multiple observers might be found by doing a Google search for "Marian apparition," although such cases are quite different from those I have discussed.

An additional case of an apparition seen by multiple observers can be read here.

Postscript: In the latest issue of the Journal of Scientific Exploration, there is a long editorial by parapsychologist Stephen E. Braude on the topic of apparitions seen by multiple observers. He discusses the inadequacies of attempts to explain such cases through supposing only telepathy is occurring. He states, "The alternative approach I’ve argued for, particularly for collective cases, is that apparitions in these cases are products of living-agent, or possibly postmortem, PK, continuous with (if not similar to) other reported examples of ostensible materialization."

A case of an apparition seen by multiple observers is recounted on this page.

An earlier version of the account involving Sherbroke and Wynyard is to be found on page 77 of the 1825 work Signs before death, and authenticated apparitions: in one hundred narratives by John Timbs.
Posted by Mark Mahin at 10:11 AM