There are two types of evidence for extrasensory perception (ESP) or telepathy. One type of evidence consists of scientific experiments. This evidence is very strong, and such experiments have very often produced results very far above what would be expected by chance (see here and here and the table below for some examples). Another type of evidence is anecdotal evidence, simply consisting of the accounts of people who seemed to experience extrasensory perception.

Louisa Rhine collected thousands of such accounts, some of which can be read in the fascinating book The Gift by psychologist Sally Rhine Feather. Before Louisa Rhine's activity, a world-famous astronomer (Camille Flammarion) compiled many reports he received of extrasensory perception. Let us now look at some of the reports of ESP made by Flammarion in his superb book The Unknown. The accounts are taken from Chapter VI of that book, which can be read here.


A Dr. Texte cited by Flammarion on page 246 reported  that a woman put it into a hypnotic trance “followed a conversation during which I expressed myself only mentally,” and that she “answered the questions which I addressed to her in this manner.” In the pages preceding and following this, Flammarion describes quite a few cases of people who seemed to show ESP while under hypnosis.

There seems to have been a poor follow-up on this promising lead, that ESP may be much higher for people in hypnotic trances. We do know that in the “ganzfeld” laboratory experiments involving people deprived of normal sensory inputs, subjects consistently score far above chance, guessing with an accuracy of between 32 percent and 37 percent, much higher than the 25 percent expected by chance. Such a result suggests that abnormal states may increase ESP. 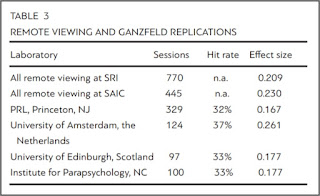 There have also been some experiments suggesting ESP works more powerfully in dreams. The idea that ESP may be much higher for people in a hypnotic trance is consistent with such results, and more efforts should be done to test such an idea.

On pages 261-262 Flammarion discusses an ESP experiment he performed himself with a person who has famed as a mind reader. He states the following:

I willed that Ninof should go and take a photograph, which was lying by the side of several others at the end of the salon, and then carry it to a gentleman whom I did not know, and whom I selected simply as being the sixth person seated among thirty spectators. This mental order was executed exactly, and without hesitation.

On page 266 Flammarion quotes a letter from a man talking about his wife. The man stated, “Very often one of us gives verbal expression to an opinion or an idea exactly at the same moment when the other was about to express it in the same terms.” On page 269 and 270 and 275 and page 266-267 Flammarion quotes five examples of what seems to be a rather common event: someone experiencing a strange feeling of fear or dread at the same time as their parent or child or spouse unexpectedly experienced danger or injury or death at a distant location. In several of these cases the person struck by the feeling was compelled to rush home in the middle of the day, even though his plan for the day was to work or travel away from home.

On page 271 Flammarion quotes a doctor who said that he was suddenly struck by the feeling that a particular one of his patients would soon appear. He went to his window, and a few minutes later exactly that patient arrived. On pages 278-279 Flammarion quotes a remarkable story of a man who suffered a toothache at night. Unable to sleep, he spent hours in bed thinking both of the dentist he must see after sleeping, and an article he was planning to write about surgical treatment of stomach cancer. The following day the dentist told the patient that he had repeatedly dreamed of him the previous night, and had dreamed that he had stomach cancer, and that the patient was going to perform surgery to cure him.

On page 293 Flammarion tells the astonishing tale of a young boy named Ludovic, who seemed to be able to instantly solve almost any problem that was read from a book by his mother. For example, one problem stated the diameter of the earth in kilometers, and the distance (in earth diameters) from the sun to the moon, and then asked: what is the distance from the earth to the sun in leagues? (A league is 5556 meters.) The boy was able to instantly answer correctly when this question and many equally difficult questions were asked. It was for a while suspected that the boy was some super-genius, but after a while it became rather clear that the boy was reading the mind of his mother, who had before her in print the answers to all the hard questions he was being asked. The story reminds of the two cases described here, in which modern children seemed to be able to read well the minds of one of their parents. 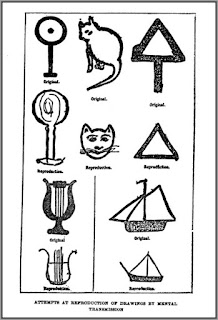 A page from Flammarion's book, giving the results of ESP tests

Another book containing accounts of ESP is the book Phantasms of the Living by Gurney, Myers and Podmore.  The book is mainly accounts of apparition sightings, but it also discusses many examples of ESP.  For example,  on page 246 of Volume I of the book, we hear an account by Charles Curtis, who reported that a young girl suddenly said, "Davie's drowned."  It was soon found out that Davie had indeed drowned at about the same time, at a location 40 miles away.  On page 259 we hear a similar account of someone who declared that someone had died,  with the news soon arriving that exactly the same person had died far away at the same time.  On page 260 we have another case of a person who stated that her brother was drowning far away, only to receive word on the same day that the brother had drowned at about the same time as the sister made the unusual claim.

I have several times experienced incidents very strongly indicating ESP.  When I was young I once did a test with my sister, in which a person would think of an object somewhere in the house, and the other person would try to guess that object. The guessing person could only ask questions with a "yes" or "no" answer, and as soon as there was a single "no" answer a round was considered a failure. Including the basement, the house had four floors.  There were at least ten consecutive successful rounds in which all the answers were "yes," with the correct object being guessed. This involved roughly 50 or 60 consecutive questions in which every single question was answered "yes."  After each round the guesser was switched, so it couldn't have just been a case of my sister always saying, "yes."  The odds of something like this occurring by chance are less than 1 in a quintillion.  After we were scolded by an older sister for being enthusiastic about the result, we never retried the experiment.

Several years ago I was at the Queens Zoo in New York City with my two daughters when they were teenagers. We were looking at a feline animal called a puma, which we could see distantly, far behind a plastic barrier. Suddenly (oddly enough) I had a recollection of a zoo visit I had experienced about ten years earlier, when I saw a gorilla just behind a plastic barrier, at the zoo at Busch Gardens in Florida. About three seconds later (before I said anything), my younger daughter said, “Do you remember that gorilla we saw close-up in Busch Gardens?” I was flabbergasted. It was as if there was telepathy going on. The incident seems all the more amazing when you consider that teenagers live very much in the present or the near future, and virtually never talk about not-very-dramatic things that happened 10 years ago. There was nothing in our field of view that might have caused both of us to have that recollection at the same time. On that zoo visit we hadn't seen a gorilla, nor had we seen any animal near a plastic barrier.

Speaking of telepathy or ESP, Flammarion states on page 304, “The action of one human being on another, from a distance, is a scientific fact; it is as certain as the existence of Paris, of Napoleon, of oxygen or of Sirius.” On page 309 he emphatically ends his chapter (which gave many examples of evidence for ESP) by saying this: “What is certain is: THAT TELEPATHY CAN AND OUGHT TO BE HENCEFORTH CONSIDERED BY SCIENCES AS AN INCONTESTABLE REALITY.”

Postscript:  Below is an astonishing case told by Flammarion on page 11-12 of his book Death and Its Mystery:

On June 27, 1894, at about nine o'clock in the morning.
Dr. Qallet, then a student of medicine in Lyons, was study-
ing in his room, in company with a fellow-student, Dr. Varay,
for the first examination for the degree of doctor, and was
very much absorbed in his work, when he was irresistibly
distracted from it by a sentence that obsessed him, the repetition, in his inner consciousness, of the words, "Monsieur
Casimir Perier was elected Pnesident of the republic by four
hundred and fifty-one votes." The student wrote this sentence upon a sheet of paper which he handed to his companion, complaining of the obsession. Yaray read it, shrugged his shoulders, and when his
friend insisted that he believed it to be a real premonition, asked him, harshly enough, to let him work undisturbed...That day the election was held at Versailles, at two o'clock. Presently, while the students from Lyons were refreshing themselves upon the terrace of a cafe, newsboys passed, and shouted: "Monsieur Casimir Perier elected President of the republic by four hundred and fifty-one votes!"
Posted by Mark Mahin at 9:44 AM