Sometimes when nature takes away something, it seems to give something back in return. One such case seems to be the case of savants – people who have unusual mental abilities despite having other mental shortcomings. An example of a savant is Daniel Tammet, who has been diagnosed with Asperger Syndrome. He holds the European record for reciting Pi from memory, to 22,514 digits. Supposedly he learned the Icelandic language in only ten days. Another example of a savant is the late Kim Peek, who supposedly could accurately recall the details of 12,000 books he had read, despite having an IQ of only 87. Like several savants, he had the ability to instantly calculate the day of the week on which any person he met was born. You can find other similar cases on the web site of Darold Treffert, a doctor who has been studying such cases for many years.

In one article on the Scientific American blog, Treffert records the astonishing case of Leslie Lemke:

Leslie–blind, cognitively impaired and with such spasticity in his hands that he could not hold a fork or spoon to eat—had become a accomplished pianist, never having had a piano lesson in his life. Somehow the hand spasticity magically disappears when he sits at the keyboard. The 1983 60 Minutes program, which many still remember, recounted in detail the astonishment of Leslie’s mother, May Lemke, one evening, when Leslie, age 14, played back Tchaikovsky’s Piano Concerto No. 1 flawlessly, having heard it earlier for the first time that evening as the soundtrack to the movie Sincerely Yours.

This was apparently no fluke. As Treffert tells us about Leslie in another story, “He can remember a piece of any length and play it back flawlessly after a single hearing... Leslie will still play back and sing any song that an audience member might provide as a challenge and it is almost impossible to 'stump Leslie' however hard people try.”

Dr. Treffert has expressed interest in a recent case that might be the most spectacular case of a savant ever: the case of a young autistic Indian girl named Nandana who can supposedly read her mother's mind with a high degree of accuracy. The case was reported in this news feature.

Newspaper reporters visiting Nandana said, “We were left amazed and totally impressed when Nandana passed our tests with flying colors.” They tried a test in which the mother was given a piece of paper with the digits 044050799. The child then typed those digits exactly, which she apparently had not seen. In a second test the mother was given a note saying, “Can I have some warm water, please?” The child reproduced the text, with some spelling errors. The mother was then brought to a different room, and asked to think about an object. She thought of a biscuit. The child was brought back in from the other room, and specified biscuit as the object her mother was thinking of.

Recently there has appeared another case of an alleged autistic mind reader. This case seems to have been investigated under controlled scientific conditions. The reported results are as spectacular as the previously reported tests with Nandana.

The results were presented at the recent annual convention of the Parapsychological Association, in a paper entitled “Evidence for Telepathic Communication in a Nonverbal Autistic Child” written by Diane Hennacy Powell, MD. You can read the abstract here by scrolling down to page 25. Powell did experiments with an autistic girl named Hayley who can supposedly engage in telepathy with her therapists. The results reported below by Powell seem to be some of the most spectacular results ever reported in an ESP experiment: 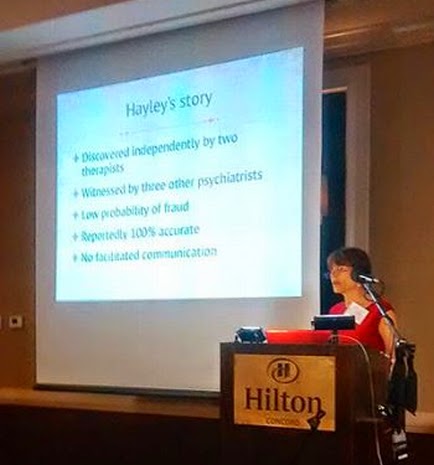 Skeptics might object that some subtle signals (either auditory or visual) may have been going on between the therapists and the child. But these results were produced under videotaped conditions, as Powell reports:

To assess for any possible visual and/or auditory cueing, five high
definition point-of-view (POV) cameras and three microphones were
strategically placed in the experimental space to capture coverage
of the entire room, the therapist and child, and their separate workspaces.
All cameras were synchronized and time-stamped.

This sounds like potentially bulletproof evidence for mind-reading. But there's only one problem: the tapes haven't been released. One Facebook user says that he was invited to watch the tapes, and that they are five hours of very convincing evidence. But until these tapes are released, not many doubters will be persuaded. I will update this blog post if the tapes are ever released.

Postscript: Powell gives some more details here. She claims she hasn't posted the video to YouTube because the family wants to remain anonymous.
Posted by Mark Mahin at 8:54 AM