The Enigma of Veridical Near-Death Experiences

During a near-death experience, someone who undergoes cardiac arrest may have some experience of floating out of his body. Skeptics say such experiences are just hallucinations.  Such a claim is contradicted by the fact that the brain's electrical activity very soon ceases after the heart stops, making hallucinations impossible. Experimental results on the cessation of brain electrical activity after heart stoppage are summarized on page 28 of this document.  There we are told that Hossmann and Kleihues in 1973 tested with 200 cats and 21 monkeys, and found that EEG (a measure of the electrical activity in the brain) became "isoelectric" (in other words, a flat line) within 20 seconds following the stop of blood to the heart.  We are also told that a result of the brain flat-lining within 15 seconds was produced in 1991 with 37 dogs (Stertz et. al.), with 143 cats (Hossmann, 1988), and with 10 monkeys (Steen et. al. 1985).

Moreover, there has been a certain category of near-death experiences that seem very difficult or impossible to explain as hallucinations: what are called veridical near-death experiences. During such experiences a patient may report seeing or hearing things that he or she should not have been able to perceive, because the patient was unconscious at the time.

Case 2.2: A patient reported having an out-of-body experience (OBE) during a cardiac arrest, and reported seeing a penny on the top of a cabinet. The cabinet was checked, and a penny was found there.

Case 2.3: In this well-known case, a woman named Maria reported floating out of her body during a cardiac arrest, and that during such an experience she saw a dark blue tennis shoe on a ledge near a window on the third floor. A search found such a shoe in such a location.

Case 2.5: At a hospital a woman who had a cardiac arrest reported having an out-of-body experience during which she floated out of her body, and saw a 12-digit serial number on the top of a six-foot tall respirator. The respirator was later checked and found to have exactly that number on its top.

Case 2.6: A man reported having an out-of-body experience during which he observed a 1985 quarter atop an 8-foot-high cardiac monitor. The top of the monitor was checked, and a 1985 quarter was found on its top.

Case 2.8: A man reported having an out-of-body experience during which he observed medical workers putting defibrillation paddles on him and gel. This matched his actual medical experience during his cardiac resuscitation.

Case 2.11: a woman reported floating out of her body during a cardiac arrest, and that during such an experience she rose up through the hospital's floors, rising up above the roof, where she saw the skyline and a red shoe. A search of the hospital's roof found a red shoe on the roof.

Case 2.12: A man reported that during his cardiac operation he floated out of his body and returned to his home, where he saw a caretaker having sex there with his girlfriend. The caretaker admitted this had happened.

Case 2.13: A woman reported that during her operation she floated out of her body and saw doctors telling her family (incorrectly) that she had died. It was later confirmed that the family had been told that.

Case 2.14: A woman reported having a near-death experience in which she looked down at her body from a corner of a hospital room during her operation. She then reported seeing in a paranormal way two of her grandmothers saying in a cafeteria that they were going to have a cigarette, even though neither smoked. It was confirmed that this improbable thing had happened.

Case 3.1: A woman put under general anesthesia during her operation reported details of her operations from an “on the ceiling” perspective, and also correctly reported details of an operation in the adjacent operating room, such as the amputation of a leg and its placement in a yellow bag. She made the report as soon as she woke up, and had no way of knowing such information.

Case 3.7: A man missing his dentures correctly reported a nurse putting them in the drawer of a cart during his cardiac resuscitation, when he should have been completely unconscious.

Case 3.8 A man reported a near-death experience during cardiac arrest. He reported that during the medical efforts to revive him, he saw that a nurse dropped a tray and was scolded about it by a doctor. The account was confirmed.

Case 3.9 A woman had a near-death experience during cardiac arrest. She reported hovering in a corner of the room near the ceiling, and noticed a rose-shaped hair clip and a bottle breaking, details she should have been unaware of. The details were accurate.

Case 3.10 A patient unconscious during his operation reported floating above his body, and accurately described details of his operation.

Case 3.11 This dramatic near-death experience account is told in the youtube.com interview here. A patient was written off for dead, and had no vital signs for "close to 20 minutes." During that time he had "no heart beat, no blood pressure, no respiratory function."  But then in a seemingly miraculous manner the patient's vital signs reappeared, and he eventually "recovered fully." The patient described a near-death experience in which he observed post-it notes in the operating room that he should have been unable to observe because his eyes were taped and he was unconscious. The details were accurate.

Case 3.12 A patient whose heart was stopped reported a near-death experience in which he heard some paramedic say something to the effect that the patient would never revive, but a rookie paramedic could use the patient to practice CPR. After undergoing an amazing recovery, the patient told what he had heard to one of the paramedics, who was amazed that the man had apparently heard what the paramedic had said.

Case 3.16 Medical staff tried to save a patient who had undergone cardiac arrest, and they decided to stop the resuscitation efforts. They later found a faint pulse, and resumed the revival efforts. The man survived, and described the medical efforts trying to revive him. He “got all the details right, which was impossible” because he had no pulse during such efforts.

Case 3.18 A man who had a cardiac arrest during an operation reported to his doctor that he had seen a brown leather key fob fall out of the doctor's pocket during the operation. The doctor confirmed that such a thing had happened, at a time when the patient should have been unconscious.

Case 3.29: This case is the famous Pam Reynolds case, which I discuss here (while also discussing an equally astonishing case more recent).  While having her senses blocked and her temperature dramatically lowered during an operation that should have guaranteed unconsciousness, Reynolds reported a near-death that included very specific details of her operation she should have been unaware of.

Case 3.30: A boy who underwent cardiac arrest recalled that during the medical efforts to revive him he "had been up in a corner of the room and had looked down on his body." He correctly recalled several details of the procedure.

There are many other similar accounts in this compelling and well-documented book, which I recommend. The book documents all the original sources of these accounts.

Such accounts present two great difficulties for anyone claiming that these near-death experiences were just hallucinations. The first difficulty is accounting for the similarity of the accounts. Many times in the book we hear accounts of people who said they floated out of their bodies and watched their operations or medical resuscitation attempts from a corner of the hospital room or the ceiling of the room. Why should such a narrative element occur so often in hallucinations, which we would expect to have only random content? The second difficulty is explaining the accurate details in such accounts. To deal with that, the skeptic may tie himself in knots, telling us nonsense such as the suggestion that someone might record perceptions while he in unconscious, and then play them back in his mind when he awakes. No such ability of humans has ever been proven. 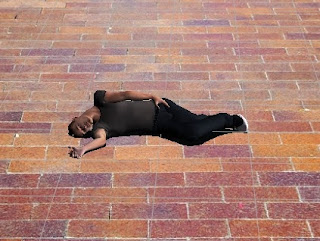 Will you one day view your body from this perspective?

Postscript: See this link for why DMT is not an explanation for near-death experiences.
Posted by Mark Mahin at 10:19 AM