How Could a Mere Microtrace of DMT Produce a Near-Death Experience?

Near death experiences (NDE) first came to public light in the 1970's with the publication of Raymond Moody's book Life After Life. Patching together elements from different accounts, Moody described an archetypal typical near-death experience, while noting that most accounts include only some elements in the described archetype. The archetype NDE included elements such as a sensation of floating out of the body, feelings of peace and joy, a life-review that occurs very quickly or in some altered type of time, a passage through a tunnel, an encounter with a being of light, and seeing deceased relatives. Since Moody's original book, near-death experiences have been the subject of extensive scientific study, with very many accounts published and collected by other authors.

A recent scientific paper attempts to hint at a natural explanation for near-death experiences, by trying to suggest that they may be caused by the hallucinogenic drug DMT. The paper was entitled “DMT Models the Near-Death Experience.” The hypothesis hinted at (that DMT may be an explanation for near-death experiences) is hardly credible. 99% of the people who have experienced near-death experiences never used the drug DMT. While some have suggested that there may be the faintest traces of this drug in the human body, the facts I cite at the end of this post will clarify that the human body does not have even a thousandth of the amount of DMT necessary to create some type of unusual mental experience.

The paper authors (Timmermann and others) made use of what is called the Greyson scale. Created by near-death experience researcher Bruce Greyson, the Greyson scale asks 16 questions about reported aspects of a near-death experience. A person can give an answer that can be 0 to mean “no,” 1 to mean something moderately extraordinary, or 2 to mean something highly extraordinary. For example, question 12 is “Did you feel separated from your body?” The three possible answers are 0 to mean “No,” 1 to mean “I lost awareness of my body,” and 2 to mean “I clearly left my body and existed outside of it.” The maximum score on the Greyson scale is 48.

Timmermann and his colleagues injected 13 subjects with the drug DMT. The number of subjects was smaller than the number of subjects (15) recommended for reliable data with a low chance of false alarms. Timmermann and his colleagues then asked the Greyson scale questions of these subjects. They then compared their answers to 13 random people who claimed to have near-death experiences.

Figure 4 of the study compares the Greyson scale answers of the people who experienced near-death experiences with the answers of those who received the DMT injections. We see quite a discrepancy in several areas. The main differences are below:

In fact, when we read previously published accounts of DMT experiences, such as those given here, we have reason to believe that DMT produces all kinds of weird stuff that doesn't show up in near-death experiences. The page includes all kind of random hallucinatory stuff such as someone seeing his house unbuilding itself, someone reporting that there were slinky toys everywhere, someone reporting his computer looking sad, someone reporting his friends melting, and someone being swallowed by a being like an octopus. 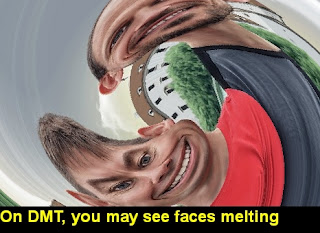 It seems likely that not a single one of the 13 subjects had an overall experience closely resembling a near-death experience, on the grounds that the Timmermann paper does not publish a single account written by the subjects who were injected with DMT. If any one of the subjects had reported such an experience, it seems that the authors would have included such a compelling account in their paper, which might have persuaded many people what the authors were trying to provide evidence for.

The Timmermann paper says that it got subjects “by word of mouth,” so we may guess that the subjects were students of the professors. Such persons might have been people more likely to give positive answers when given the Greyson scale questions after their DMT experience, particularly if they knew that one of their professors was hoping to get enough positive answers to publish a paper saying DMT experiences are like near-death experiences. A better approach might have been to have advertised for subjects online.

A question of great relevance here is: is there any reason to believe that the human brain might be able to produce or release enough DMT to produce an extraordinary experience that was something like a hallucinogenic experience or near-death experience? DMT was found in the brains of rats, but only 20 nanograms per kilogram (as mentioned here). To get a mystical or hallucinatory or extraordinary experience in a human, you need about 20 milligrams of DMT, an amount a million times larger than 20 nanograms.

The question of DMT in the brain was clarified by David E. Nichols in a paper he authored in the Journal of Psychopharmocology. Speaking of DMT (also known as N,N-dimethyltryptamine) in the paper Nichols says, “It is clear that very minute concentrations of N,N-dimethyltryptamine have been detected in the brain, but they are not sufficient to produce psychoactive effects.” Addressing speculations that DMT is produced by the tiny pea-sized pineal gland in the brain, Nichols points out that the main purpose of the pineal gland is to produce melatonin, but the pineal gland only produces 30 micrograms of melatonin per day. But the pineal gland would need to produce about 20 milligrams of DMT (about 660 times more than 30 micrograms) to produce a mystical or hallucinatory experience. “The rational scientist will recognize that it is simply impossible for the pineal gland to accomplish such a heroic biochemical feat,” says Nichols. In the article in which he states that, it is noted that “DMT is rapidly broken down by monoamine oxidase (MAO) and there is no evidence that the drug can naturally accumulate within the brain.” Strassman attempted to detect DMT in the brains of 10 human corpses, but was not able to find any.

Given these facts, it is quite absurd to suggest that near-death experiences are being produced by DMT in the brain. Judging from the amount of DMT in rat brains, we have about 100,000 times too little DMT in our bodies for DMT-produced experiences to appear. Web pages speculating that near-death experiences may be produced by DMT will typically tell us that DMT has been detected in rat brains, failing to tell us how much DMT was detected (merely trace levels 100,000 times too small to produce any remarkable mental experiences).

Postscript:  You can google for "DMT experiences" to get many accounts of what it's like to take DMT. When people take DMT, it is extremely common for them to quickly experience a kind of runaway, kaleidoscopic imagery with all kinds of fantastic bizarre details. For example, you might see something like this in front of you: 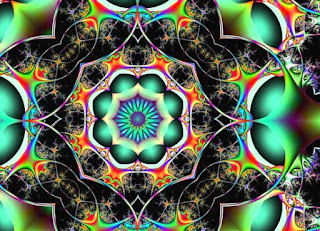 People taking DMT report encounters with an extremely wide variety of strange beings, that may include elves, reptiles, spiders, robots, jellyfish, extraterrestrials, spiritual figures, or an octopus. So you might see something like this: 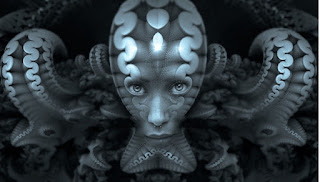 We may contrast such exotic dream-like imagery with the 20+ "veridical" near-death experiences described here, in which people having near-death experiences reported no kind of weird psychedelic imagery, but just ordinary down-to-earth details of medical efforts to revive them (while they were unconscious)  or parts of a hospital they hadn't seen yet, details that were subsequently confirmed. There's a world of difference between such accounts and DMT trips.

Another reason for rejecting a DMT explanation and all other brain chemistry explanations for near-death experiences is that near-death experiences have been repeatedly been reported during cardiac arrests, after the brain has temporarily shut down (as it does within 20 seconds after the heart stops). Your brain cannot be tripping out on DMT when the brain's electrical activity has shut down.

Postscript: See this video for a very detailed technical discussion by David E. Nichols PhD on why the idea of DMT existing in the pineal gland is a fantasy.  Although micro-traces of DMT have been found in cerebrospinal fluid, there is zero evidence that DMT exists in the human brain. At 25:08 in the Nichols video, he displays a slide saying, "There is no evidence to suggest that DMT can be accumulated within the brain or within neurons at significant concentrations; such inferences are either not supported by direct experimental evidence or are based on flawed experiments."
Posted by Mark Mahin at 9:03 AM

Email ThisBlogThis!Share to TwitterShare to FacebookShare to Pinterest
Labels: near death experience