There's a silly article recently added on the Quanta online science site. The article is entitled “Dividing Droplets Could Explain Life's Origin.” Apparently some scientists have discovered that some lifeless particles can naturally divide, and some of them are talking as if this fact may help us explain the origin of life. But it has been common knowledge for thousands of years that round lifeless particles can naturally divide. This has been known to anyone who ever closely looked at the rain drops on the side of a tree during a rainy day, and who noticed that big drops often divide into smaller drops while they are dripping down the bark.

Why is it very silly to be claiming that dividing lifeless particles do anything to help explain the origin of life? It's because cells are more like miniature cities than like raindrops. So when a cell divides, it isn't like a raindrop splitting into two. When a cell divides, it's more like a city magically making a copy of itself, like you might have if Miami were to make a copy of itself which started floating on the Atlantic ocean. 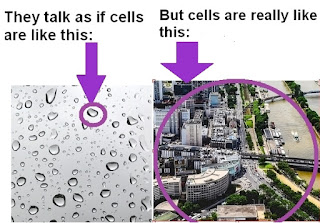 But it may be argued that the cells we observe in our microscopes are more complicated than the first living cells. That's true, but even the first living cells must have been incredibly complicated, far too complicated to have arisen by any known natural process. A team of 9 scientists wrote a scientific paper entitled, “Essential genes of a minimal bacterium.” It analyzed a type of bacteria (Mycoplasma genitalium) that has “the smallest genome of any organism that can be grown in pure culture.” According to wikipedia's article, this bacteria has 525 genes consisting of 580,070 base pairs. The paper concluded that 382 of this bacteria's protein-coding genes (72 percent) are essential. So multiplying that 580,070 by 72 percent, we get a figure of about 418,000 base pairs in the genome that are essential functionality.

What is the chance of such functionality falling into place accidentally? Essentially zero.  Analysis of what is known as the fitness landscape of proteins indicates that proteins are highly sensitive to changes, with minor changes disrupting their performance. They “can be exquisitely sensitive to changes in the amino acid sequence,” as a biology text notes. For example, an analysis of the fitness landscape of a protein used in fluorescence found that “3/4 of the derivatives with a single mutation showing reduced fluorescence and half of the derivatives with four mutations being completely non-fluorescent.” So a protein has to be “just right” to do its job – a few random changes here and there, and you break its functionality.

Straightforward calculations suggest that you would need something like 1070 tries before random combinations would produce a particular protein. Natural selection would not help, because we are talking about proteins that need to appear before any cellular life appears, and before natural selection can begin. The miracle of a functional protein appearing would need to occur not just once but hundreds of times before even a primitive cell could appear.

Then there's the unsolved problem of homochirality. Our cells use only left-handed amino acids and right-handed sugars. Were it not for that fact, it wouldn't be possible to make complex proteins. It would be like trying to finish a jigsaw puzzle when half of the pieces were turned upside-down; in that case there would be no way to fit the pieces together. But when amino acids are created in the laboratory, half are left-handed and half are right-handed; and so it is for sugars. You would have to have seemingly impossible lucky breaks needed for all amino acids to have the same left-handedness, with the sugars all being right-handed. Something like this seems rather like an additional winning 20-digit lottery ticket that needs to exactly match before life can get started. And I won't even go into the difficulties of explaining the origin of the genetic code, an ordered system of symbolic representations used by all living things.

A simple particle splitting into two is very easy to explain. A self-reproducing cell is a very, very hard thing to explain. Even if such a cell were the simplest early cell, and acted merely like a self-reproducing machine rather than a self-reproducing city, then you still have two gigantic difficulties. The first is explaining how the machine appeared in the first place, and the second is explaining how the machine learned the trick of being able to make a copy of itself. We don't even understand very well how today's cells are able to reproduce. A University of Chicago science site says, “There are many remaining mysteries about how cells perform this remarkable feat.”


An example of machine-like functionality in our cells is the cell component called a centriole, which a biology text tells us is something that “looks more like something made in a machine shop than in a living cell” (Life Itself by Boyce Rensberger, page 59). The same text says molecules of tubulin in a cell are “ like magic bricks that assemble themselves into a wall” (page 23). The same type of “magic brick” behavior is found in a vast number of complex proteins, which spontaneously assemble themselves into very intricate and complicated 3D shapes through a process called protein folding that scientists have been trying to figure out for decades, with very little success. 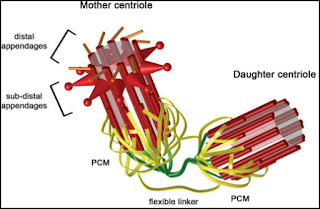 Because explaining the appearance of a self-reproducing cell with hundreds of proteins is literally trillions of times harder than explaining the existence of simple particles or droplets splitting into two, I estimate that the Quanta article in question is guilty of a trillion-fold underestimation of the difficulty of cellular abiogenesis. But the article is in good company, because requirements underestimation is pretty much the central sin of the modern theoretical scientist (along with the sin of claiming to understand things that are not actually understood). Such folks often seem to be considering Everest-sized requirements for the existence of creatures such as us, and then trying to paint these requirements as if they were trifling. This involves trying to make high, high mountains look like molehills smaller than a basketball.

A similar example of nonsense-speak is found in this recent news story which tells us that the “building blocks of life” have been found 200 light-years away. What were these“building blocks”? Merely carbon, nitrogen, and water.