Yet Another 25 Who Were “Ghost-Told” of a Death

Three previous posts on this blog have summarized accounts of people who saw an apparition of someone, or heard a mysterious voice from someone they knew, only to soon find that such a person had died (usually on the same day, and very often on the same hour and day as the apparition was seen).  Each of these posts described 25 different cases. The posts are below:

Let us now look at 25 more of these cases, not mentioned in my previous posts on this topic. Below are some cases from Volume 2 of the classic work on apparitions, Phantasms of the Living by Edmund Gurney, Frederick Myers, and Frank Podmore. Just click on the links below to bring up this work online, going to the exact pages of the accounts I refer to.

Page 501, Case 541: On a train George Barker heard a woman say she had seen her son drowning before her eyes, and that it was so real she could not believe she was traveling on a train. George's tutor became acquainted with the woman, and found that two weeks later word arrived that her son (in the Navy) had indeed drowned while rowing from ship to shore. Noting that he was a disbeliever in anything ghostly, Barker stated, “I have no doubt that the time was exactly the same....The time of the upsetting of the boat was, allowing for the change between the two distances, as nearly corresponding as possible.”

Page 511, Case 552: Mrs. Rooke stated that on a day in October, she saw an apparition of a friend of hers, and that the apparition vanished as she approached it. She later found out the friend had died. She said that the sighting might have occurred at the same time as the death (but sounded uncertain about the timing).

Page 513, Case 555: On September 22, a Mrs. Perryn saw an apparition of her mother, who seemed to be enveloped in a faint smoke. She later found out that her mother died on the same day at another location.

Page 514, Case 557: A Mary C. saw an apparition of an old woman she knew, an apparition that vanished suddenly as she looked at it. She later found that the woman died on the same day.

Page 516, Cases 559-560: Hickman Heather said that his father saw an apparition of his mother (Hickman's grandmother) early in the morning while walking home, and that Hickman's grandmother suddenly died on the same day. Hickman also reported that his father had seen his brother Ned (Hickman's uncle) appear at a time when it was “impossible that my Uncle Ned could be there.” In “about a couple of hours” word came that Ned had died.

Page 519, Case 562: A young boy reported seeing his father, Captain Skyring, although his father was far away on a naval expedition. Shortly thereafter the boy's mother received word Captain Skyring had been murdered "on the day in question," apparently the same day the boy saw the apparition. Earlier Captain Skyring himself reported seeing an apparition of his mother while away from England, and then found upon returning to England that his mother had died on the same day as the apparition. In both this case and the previous case we have astonishing accounts of two “veridical apparition” sightings in a single family. 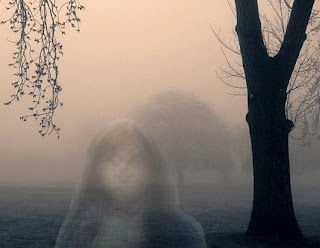 Page 521, Case 566: Mrs. Morris saw “little G.” carrying two lilies, and the apparition disappeared as she looked at it. She later found that the same person had died on the same day. She was told that G. had been given lilies just before he died, and was delighted with them, and had held them shortly before dying; and that they were now in the hand of G.

Page 522, Case 567: Mrs. Amos stated that she saw an apparition of her mother while Mrs. Amos and her husband were in bed. She discussed the sight with her husband, who was unable to see the strange sight.  "After that she vanished slowly away," stated Mrs. Amos, who received a letter the next day telling her the mother had died.

Page 522-523, Case 568: A man far away from his mother was surprised to see an apparition of his mother and his dead sister.  He tried lighting a candle, but "the apparitions had already faded away."  He soon found that his mother had died on about the same day.

Page 542, Case 590: A boy at a boarding school was astonished to see on April 1 an apparition of his mother, who lived about 250 miles away.  He later found that his mother had died on April 1.

Page 545, Case 594: A man saw his wife passing by him in a field. She must have looked spooky, for he then said to a friend, "I am sure my wife is dead."  He then found out that his wife had died at the same time the sight was seen.

Page 550, Case 601: A Mr. Milton reported seeing his son in his cellar, at a time when the son was believed to be at sea.  A few weeks later Mr. Milton received word from the captain of the ship that Mr. Milton's son had died on the same night as the sight was seen in the cellar.

Page 554, Case 606: In Ceylon (now called Sri Lanka), a Mr. Selby saw a strange sight that caused him to write down, "My wife died 13 minutes to 6 o'clock."  A month later he found out that his wife had died in England within a few hours of the time he wrote the note.

Page 583, Case 636: A woman "saw her son coming through the wall, and making his exit through the opposite wall." She then found out an hour later that her son had drowned.

Page 604, Case 651: Benjamin Coleman was surprised to see at his bedside his son, who was believed to be far away at sea.  The figure (wearing sailor clothes) vanished from Benjamin's sight. He then soon heard his servant William Ball say that William also had seen the son that day in sailor dress.  The father later found that the son "had died that very day and hour, of dysentery, on board ship."

Page 611, Case 658: Chatting in bed, Elizabeth and Henriette both saw a strange light, which they both said was beautiful.  Elizabeth then said it was little Mary Stanger, and that she was "floating away."  It was later learned that Mary Stanger had "died at the exact time" the two girls had seen the vision.

Page 612, Case 659: A sibling and the sibling's sister were surprised to see at the sibling's bedside the sibling's brother, who was believed to be far away doing a job for a reigning prince.  Three weeks later word came that the brother "had died the same night, and the same hour."

Page 613, Case 660: Two brothers were in bed when they both saw the apparition of a lady to whom their father was engaged. She died suddenly that same night.

Page 615-616, Case 662: Between 6 and 7 o'clock, a woman, her brother and her mother all saw Ellen, the woman's sister.  The woman "tried to catch hold of her, but seemed to catch nothing." The next day they found out that Ellen had drowned "a little before seven" on the same they saw the apparition.

Page 617-618, Case 665: Two brothers woke to see standing between their cots the figure of their father. When one of the brothers rose up, the figure vanished.  They later found that their father had died at the same hour.

Page 622, Case 667: Four people were startled to see an apparition that disappeared just after a woman screamed "He's dead."  Word later arrived that a person corresponding to the apparition had been murdered far away on the same night.  The account says, "his spirit appeared to his wife, his child, an elder sister, and myself."

The account just cited is not a rare one -- for there are quite a few cases of apparitions being seen by multiple observers at the same time.  See here and here for 34 such cases.

Postscript:  Here is another case from Volume 2 of Phantasms of the Living, page 538:

"My aunt lived at the time in Portland Place, W., and was entertaining a large party one evening. Suddenly they remarked she seemed to be in great pain and agony, exclaiming quite aloud to her guests, ' Oh, do go home. I have seen a most fearful sight, and am compelled to break up the party.' Some of her most intimate friends asked her what she had seen. She replied that she was certain ' her husband F. had been killed in a battle, and that she most distinctly saw his body being carried to the rear by his soldiers.' She remained in great anxiety for weeks, when the sad news confirming her vision arrived from America, and that at the hour she
made the exclamation to her guests, her husband, F., of the Dragoons (allowing for difference of longitude), was killed in an attack made on the enemy at the battle of Saratoga."

Two historical accounts of the battle were checked by the authors of Phantasms of the Living, who found that the brigadier general in question (Simon Fraser) was wounded at the battle of Saratoga, that he was removed from the battle scene, and that he died the next day.
Posted by Mark Mahin at 9:32 AM