The Facts of Life, 2500 AD: A Science Fiction Story

“Tim,” said Tim's Dad, “I think it's time we had that talk that every parent should eventually have with his child.”

“No, I'm not talking about your career choice,” said Dad. “We can talk about that another day. Today I want to talk about the facts of life. Have you learned about them yet the way I did – from kids on the street?”

“They've said various things, but it left me all confused,” said Tim.

“Well then, I guess it's time we had a serious talk about the basic facts of sex and reproduction,” said Dad. “You're probably interested in hearing how sex works, aren't you.”

“I sure am,” said Tim with a twinkle in his eye.

“Here's exactly how it all works,” said Dad. “You're almost old enough to have sex. Before long, you'll be able to have your first sexual experience. At that time, I'll give you your entry card for the Orgasm Center. You'll lie in a special reclining chair, and then they'll stick something on your head, which will allow direct wire entry to a pleasure center of your brain. Then the electrical stimulation will begin. Soon you'll feel a tremendous feeling of sexual pleasure called an orgasm. It will last for as long as you want – seconds, minutes or hours.”

“So that's all there is to sex, just going to the Orgasm Center, and hooking up your head to a machine?” asked Tim.

“But isn't it also possible for a man to have sexual pleasure all by himself, just by rubbing himself the right way?” said Tim.

“Oh, sure, you can do that, but that's a third-rate way to get sexual pleasure,” said Dad. “If you do that, the orgasm only lasts a few seconds. Much better to have sex at the Orgasm Center so that your orgasm can last for many minutes or even hours.”

“What about reproduction?” asked Tim. “How does that work?”

“Here's how it works,” said Dad. “When a man and a woman want to have a baby, they both go down to the government-run Reproduction Center. The robots at the center will extract an ovum or egg from the female, and the robots will collect a sperm sample from the man. Then the man and the woman depart, and the robots at the Reproduction Center take care of all the rest. They do all the work needed to fertilize the ovum, and guide that ovum so it progresses in the right way to become a human baby. Nine months later, the man and the woman come back to the Reproduction Center to pick up their baby.”

“Wow, so it's all real easy on the mother, right?” said Tim. 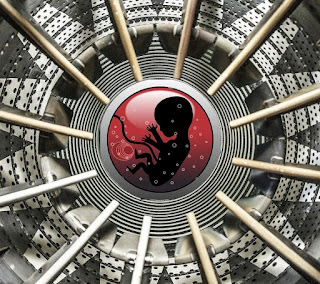 Later Tim grew old enough to start experiencing sex at the Orgasm Center. He found the pleasure delightful. When he was 19, Tim met a young woman named Kate who felt an attraction for him. One day Kate suggested something that surprised Tim.

“Tim, I have an intriguing idea,” said Kate. “Maybe the two of us could get....physically entangled.”

“What do you mean?” said Tim “Are you suggesting we do some kind of sports together?”

“No,” said Kate, blushing. “I had in mind something more...intimate.”

“Are you suggesting that we have sex together?” said Tim.

“I was going to put it in more romantic terms,” said Kate. “But yes, I guess that's what I had in mind.”

“That is feasible,” said Tim. “Why don't we book two simultaneous sessions at the Orgasm Center, in side-by-side reclining chairs? Then we can both enjoy electronic orgasms together.”

“No, I was talking about sex the old-fashioned way,” said Kate.

“But everyone says that sex outside of the Orgasm Center is an archaic waste of time,” said Tim. “It's like using a hand plow to plant food instead of using robotic agriculture, or using a horse-drawn carriage instead of using a self-driving car-copter.”

“Well, old-fashioned sex was once good enough for the human race to use it exclusively for reproduction,” said Kate.

“No way,” said Tim. “The only way humans can reproduce is by the assistance of the robots in the Reproduction Center.”

Tim did some research on the topic. He wasn't able to find out much about the history of human reproduction. The government had made it very hard to find out how people reproduced long ago. Convinced that robot-assisted reproduction was the better way to do things, the government wanted everyone to use that method, and didn't want people to find out how easy it was to reproduce the old way. But Tim was able to find some information about DNA. Later he met up with Kate.

“I've found some information that seems to back up what I was saying before,” said Tim. “That humans never could have reproduced all by themselves. Let me ask you: if a female ovum was fertilized by a male, and the ovum was inside of a female outside of a Reproduction Center, how could the ovum have known how to turn into a human baby?”

“Uh...could it have been that the instructions for making the human baby were read from DNA?” said Kate.

“No, that couldn't be right,” said Tim. “DNA just has low-level chemical information like which amino acids make up a protein. DNA doesn't have any body plan information. DNA isn't a recipe for making a human or a blueprint for a human. Nowhere in DNA does it say humans have two arms, two legs, ten fingers, two eyes, and one head. And even if there was such information in DNA, there would be nothing in a human womb smart enough to read such incredibly complicated information to make a human baby.”

“I see your point,” said Kate. “But somehow humans were able to reproduce without using robots. I've heard this on the street several times. Maybe there was something big that allowed it to happen, some reality we don't understand.”

“No, that must just be an old-wives-tale,” said Tim. “Given the limits of DNA, something as complicated as a human baby could only grow from a tiny speck-sized ovum if there were lots of very carefully programmed robot machines working to gradually transform the fertilized ovum into a baby. That's the magic of what happens at the Reproduction Center.”

Kate eventually gave up trying to persuade Tim to do sex the old-fashioned way. They started booking sessions together at the Orgasm Center, in side-by-side reclining chairs. Years later, they went to a Reproduction Center to pick up their first baby, taking it from the hands of a robot.

Looking at her baby for the first time, Kate said, “How silly of me to have thought that something this complicated could have appeared from a little speck-sized ovum, without the assistance of the robots!” Tim said, "Well, I'm pretty sure of one thing -- if humans ever made babies themselves, they must have used a very complicated factory and assembly line."
Posted by Mark Mahin at 7:54 AM