When Apparitions Act as News Bulletins

In the posts below I have described about 200 cases of people who reported seeing an apparition of someone who had died, but whose death was unknown to the person just before they saw the apparition:

Yet Another 25 Who Were “Ghost-Told” of a Death

They Also Were "Ghost Told" of a Death

Even More Cases of Veridical Apparitions

When Apparitions Serve as Announcements

In this post I will give some more cases of this type.

On pages 155-156 of the book Death and Its Mystery: At the Moment of Death by Camille Flammarion we are told of a Baroness de Boisleve who entertained several distinguished officials for dinner on March 17, 1863.  All of a sudden the Baroness gave out a scream and fainted. Upon awakening, she told her guests she had seen her son, his left eye a hideous bleeding hole. The son was known to be away on a Mexican expedition. The guests assured the Baroness she had merely hallucinated. But it was later found out that her son had died on March 17, 1863, killed by a bullet which had pierced his left eye.  We are told, "When the difference in time was allowed for, the hour of his death corresponded exactly to the moment of his apparition in the drawing-room of the rue Pasquier."

On page 257 of the book Apparitions and Thought Transference by Frank Podmore, we read this account by a Dr. Carat:

"On the night of the l0th June 1877 I had what might be
called a telepathic hallucination. I cannot state the hour with
absolute precision, but it was between ten o’clock and mid-
night. About that time, ‘ between sleeping and waking,’ I saw
the end of my room lighted up, the darkness was illuminated by a silvery light (it is the only word I can think of), and I saw my mother gazing fixedly at me, with a sort of troubled expression. After a few seconds it all disappeared....Next day I received notice of my mother's death." 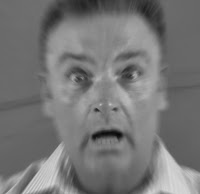 On page 266 of the same book, we read this account of an apparition sighting with a very unusual auditory aspect:

"Suddenly I saw against the background of the door, which was opposite me, my father’s face. He wore as usual a black surtout, and was deadly pale. At that moment I heard quite close to my ear a voice which said to me, ‘A telegram is coming to say your father is dead.’ All this only took a few seconds.... On the evening of the same day, about eleven o’clock, we were taking tea in the company of several other people, among whom were Madame Y., her daughter E. Y., formerly an actress at the Court Theatre, and
Mademoiselle M., who is now living in Florence. All at once
there was a knock at the door, and the concierge presented a
telegram. Pale with emotion I immediately exclaimed, ‘I know
my father is dead ; I have seen. . . .’ The telegram contained
these words, ‘ Papa dead suddenly. — Olga.’ It was a telegram
from my sister living at St. Petersburg. I learned later that my
father had committed suicide on the morning of the same day."

A very early case of a veridical apparition is to be found in the 1825 book Signs before death, and authenticated apparitions: in one hundred narratives by John Timbs. On page 44, we are told that in 1678 a Dr. Farrar made a pact with his daughter that whoever died first should appear to the other one.  The daughter died near Salisbury, 79 miles from London. We read the following:

"Her father lived in London, and the night on which she died, she opened his curtains and gazed upon him. He had before heard nothing of her illness ; but upon this apparition confidently told his maid that his daughter was dead, and two days after he received the news."

On page 157 of Louis Rhine's book Hidden Channels of the Mind, we have the following account of a young girl who learned of her father's death by seeing an apparition:

"I was sent next door to stay overnight with my girl friend. I woke up and at the foot of the bed was the most beautiful light I had ever seen. There was my father with his arms open to me and as I watched he was rising up. I called to my girlfriend, telling her my father was dead. We got up and lit the light. It was just ten after four in the morning; soon my uncle came from the hospital to tell us my father had passed away, and that he called to me as he was dying. He passed away at exactly ten after four."

The long book "The Debatable Land Between this World and the Next, with Illustrative  Narrations" by Robert Dale Owen is a fascinating exploration of paranormal phenomena, written by the author of the equally long and equally fascinating book "Footfalls on the Boundary of Another World."  On page 457 we read the following account by Frederick Steins: