Reports of the Paranormal in a Cold War Document

In March 1978 there was published "a Department of Defense Intelligence Document prepared by the Foreign Technology Division, Air Force Systems Command and approved by Assistant Vice Directorate for Science and Technical Intelligence of the Defense Intelligence Agency."  The document was entitled "PARAPHYSICS R&D-WARSAW PACT." Paraphysics is a term similar to parapsychology. The R&D stands for Research and Development.  The Warsaw Pact refers to an alliance circa 1978 involving the Soviet Union (roughly corresponding to Russia) and its eastern European satellite countries such as Poland. Let us look at some remarkable statements made in the document (which can be read here and here).

On page 3 we read the following about a paranormal ability test that got a "one in a million" result:

"The early short-distance experiments may have been performed to verify some of the research· conducted by L. L. Vasil'yev in the 1920's and 1930's and used a hypnotic state as well as normal consciousness. Some experiments were also conducted in shielded rooms. Kogan was sufficiently satisfied that the results were far greater than expected by chance and that further research was warranted. For example, in one experiment involving selection of one of ten cards numbered one through ten, with 'inductor' (sender) in a separate room, the 'percipient' (subject, or receiver) selected 13 correct cards in 26 attempts (probability around 10-6 )."

On page 4 we read about an ESP experiment that was vastly more impressive. The document states this:

"Perhaps the most meaningful experiment in terms of ease of evaluation and apparent potential in a communication mode was performed in 1967. This involved attempts at transmission of randomly selected digits between 0 and 9. Distance between 'sender' and 'receiver' was varied from several meters to several kilometers. Reported results, as attested to by at least five members of the All-Union Technical Society of Radio Technology and Communications ...indicates 105 of 135 numbers were described (received) correctly by the receiver. The article states this to be 78% correct; however, this is a significant understatement since it does not reflect the overall probability of such an occurrence. In fact, in terms of probability, this would have to qualify as the most statiatically significant result ever reported· in psychic research literature; the probability of duplication via random occurrence would be about 10-77."

Whoever wrote the document errs when he describes this result as "the most statistically significant result ever reported· in paychic research literature."  Such a result was not as impressive as the result once reported by Professor Bernard F. Riess in 1937, a professor at Hunter College in New York. The Riess experiment is discussed on page 167-168 of Rhine's book Extra-sensory Perception After Sixty Years ( see here or here).  Another discussion of the experiment is here. Riess conducted remote ESP card guessing experiments with a woman located in another room a quarter of a mile away. Guessing a total of 1850 cards (each of which had 5 possible values), the woman guessed with an accuracy of 73%. The probability of getting a result this high by chance has been estimated as 1 in 10 to the seven hundredth power, or 1 in 10700.

On page 5 we read about experiments in which certain people could tell what was inside sealed envelopes merely by touching them:

"The investigations reported by Larissa V. Vilenskaya are an example. She has been conducting research with E. K Naumov (who is not currently active) and now appears to be involved with a variety of her own investigations. One aspect is her study of a phenomena initially referred to as 'skin vision' or, more recently, 'dermo-optics.' This relates to an apparent ability of some people to identify colors of concealed 'targets' simply by touching the opaque outer covering."

No one who has studied the abundant nineteenth century evidence relating to clairvoyance under hypnosis should be surprised that such experiments were taken, or that they achieved an enormous success mentioned below. It was abundantly reported by reputable sources in the nineteenth century that under hypnosis certain people could tell what was in double-wrapped or triple-wrapped envelopes or sealed containers (read here and here for some examples).   The Didier brothers (Alexis and Adolphe) showed such an ability in public exhibitions countless times.

We read on page 6 of the "PARAPHYSICS R&D-WARSAW PACT" paper about this success in twentieth century experiments of this type:

"In one recent experimental series, a subject with apparent psychic ability identified the correct target color in 113 out of 200 trials (probability of 10-21 ). There were four color card possibilities, with 50 correlations being chance level."

On page 6.1 of the "PARAPHYSICS R&D-WARSAW PACT" paper we read about experiments that will come as no surprise to any scholar of nineteenth century reports of clairvoyance under hypnosis. We read the following: "In other instances, a visitor to Leningrad in 1975 apparently observed an informal 'remote viewing' type demonstration with a hypnotized subject." In nineteenth century literature on hypnotism (often then called "Mesmerism" or "animal magnetism"), it was very often reported that hypnotized subjects could engage in a kind of clairvoyance similar to remote viewing, under which a subject would describe details of distant locations not visible to his eyes, typically locations he had not seen with his eyes.

On page 8 of the "PARAPHYSICS R&D-WARSAW PACT" paper, we have a discussion of Nina Kulagina, who supposedly had a mind-over-matter ability that could be described as psychokinesis:

"In a recent demonstration, under informal conditions, an observer claimed Kulagina was able to cause small nonmagnetic objects, suspended from springs in a plexiglass container, to move. In another experiment she apparently caused a plastic object, in an inverted glass container, to move toward her. There have been many similar reports from other USSR investigators and visiting Western observers over the past decade....In one experimental series, frog hearts were placed in an appropriate solution, and Kulagina attempted to influence their activity. Sergeyev claims that normally frog hearts remain active in solution up to 1.5·2 hours after removal from the frog. In the first of the experiments the electrocardiogram (EKG) indicated activity ceased about 7 minutes after Kulagina began concentration on 'stopping the heart.' The heart had been in a ceramic container. In the second experiment, with the heart in a metallic container, heart activity ceased after 22 minutes. In both these experiments, Kulagina was 1.5 meters from the 'target' hearts....In another experiment, Kulagina attempted to increase the heart rate of a skeptical physician. Electroencephalogram, electrocardiogram, and other parameters were measured in both. Abrupt changes in these parameters were noted in both people within 1 minute after the experiment began. After 5 minutes, Sergeyev judged the heart activity of the physician had reached dangerous levels, and the experiment was terminated."

On page 10 we have a discussion of what sounds like evidence for levitation:

"Pushkin has also studied other aspects of psychokinetic phenomena, particularly the alleged ability of B. Ermolayev, a Moscow resident, to cause small objects to remain suspended with no apparent support. Ermolayev apparently is very close to the objects during such tests, which is suggestive of Adamenko's view tbat electrostatic fields may somehow be involved."

Also on page 10 we have a discussion of research into a kind of "Ted Serios" effect:

"Another type of investigation into paranormal energetic proceeses was reported at the Third International Psychotronics conference by G. P. Krokhalev, a psychiatrist from Perm. His experiments involve attempts to have 'mental images' appear on photographic film. He claims to have recorded the effect under controlled conditions. As an example, a person who could visualize images well, even to the point of hallucinating, was able to specify the image beforehand tbat was latar observed on the film."

The document mentions how a J. Eisenbud had observed such a power in Ted Serios, and states the Eisenbud's work "appears to be valid."

"Movement of small nonmetallic and metallic objects: Gulyayev, and other USSR Academy of Science members, have observed the apparent psychokinetic (PK) ability of Nina Kulagina to move (slide, rotate, roll) small objects a few meters removed from her. Gulyayev is oonvinced this phenomena is gennine and has observed these effects under tight control. He now plans to develop more tightly controlled experiments, with objects in sealed plastic boxes, and to further develop Kulagina's ability to 'focus' on objects at greater distance. During these experiments, Kulagina's blood pressure is typically 240/200, her pulse rate is 180-200 heats par minute, her blood sugar is five times normal, and her electroencephalogram (EEG) is similar to epileptic-type people."

We also read these startling details about Nina Kulagina:

"Gulyayev claims Kulagina's most repeatable effect is to cause burn marks to appear on other people. During acts of intention, and with her hands plaoed near the desired burn area of willing observers, a burn-like welt appears, with accompanying pain. These 'welts' eventually heal, consistent with normal burn recovery times. Gulyayev has experienced this himself, and has attempted to put physical filters between Kulagina's hands and the subject's skin. Some filters (metal, rubber) appear to have no influence; but others (glass) appear to block the 'effects.' "

On page 10.2 we read of a subject that seemed to have an ability to partially levitate objects:

"Another subject (the schizophrenic girl) appears to have the ability to cause material objects to become partially suspended. According to Gulyayev, she can cause a wooden object (ruler) to 'rise' to a 45° angle with only one end remaining in contact with the table or floor. The ruler usually remains in this position for several minutes and does not slide when placed on glass. This has been photographed, observed by other Academy members, and has been thoroughly checked for hidden strings. Gulyayev concludes it is a genuine phenomenon, and plans to pursue this type of experiment further."

"In 1966, Lozanov described one of his experiments at a parapsychology conference in Moscow. In this, a sender attempted to influence another person's selection of one of two telegraph keys. In nearly 2,000 trials, the appropriate key was selected about 70% of the time (probability of about l0-6)."

On the same page we claims that should come as no surprise to anyone who has read of countless similar claims about hypnotized persons in the nineteenth century:

"Investigations were also performed by several European researchers during the 1920's and 1930's on the abilities of Stefen Ossowiecki, a well-known Polish psychic. These investigations all concluded Ossowiecki displayed highly unusual abilities of a clairvoyant nature, including the ability to describe objects and written material sealed in lead containers and opaque envelopes."

On page 20 we read this interesting tidbit: "Stefanski believes hypnosis is necessary to develop and enhance paranormal perception, and apparently employs techniques similar to Kafka and Ryzl (the Czech researchers)."  It is true that reports of clairvoyance under a hypnotic trance seem to surpass reports of clairvoyance in a normal state of consciousness. American and European researchers in the past hundred years seem to have failed to follow up on this promising lead, as if they were neglecting to follow the rule of "use what has proven to work best." 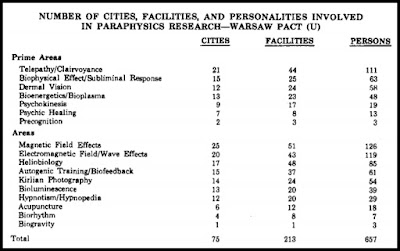 A table from the report
Posted by Mark Mahin at 7:40 AM