In the recent book Knock on Wood: Luck, Chance and the Meaning of Everything by statistics professor Jeffrey S. Rosenthal, we get no real insight about the meaning of everything. We also very much fail to get something vastly easier to produce: a reasonably fair treatment of the topic of evidence for human paranormal abilities, which are collectively referred to as psi. Rosenthal's treatment of the topic gives us quite a few examples of atrocious cherry picking, which is when someone cites only a few isolated things supporting his position, while failing to mention very strong cases, examples or reasons that argue against his position.

Chapter 21 of Rosenthal's book is entitled “Mind Over Matter?” His first form of cherry-picking is to bring up the topic of extrasensory perception (ESP), but fail to inform his reader about any of the massive laboratory evidence that exists for telepathy. Very inaccurately, he suggests that there is no evidence for it. You would never know from reading Rosenthal's book that university scientists spent many years and countless hours testing people for ESP. Excluding his discussion of remote viewing and precognition tests, his sole discussion of such laboratory tests is to tell us about a single unsuccessful ESP experiment that was done on a pair of twins. You might think from his discussion that this was the only time professors ever tested people for ESP. But why do we not hear about the countless hours of university tests done by researchers such as professor Joseph Rhine, who Rosenthal fails to mention? I suspect the reason is that such tests produced very dramatic successes proving the reality of ESP (as discussed here and here).  Similarly, Rosenthal tells us not a word about the more modern ganzfeld ESP tests under which countless experiments very consistently demonstrated results far above that which we would expect by chance.

Rosenthal mentions "replication failures" as an excuse for rejecting evidence for paranormal abilities.   This doesn't make sense. If some tests are done showing results that no human being should ever be able to have achieved by chance (if paranormal abilities do not exist), you do not debunk such evidence for the paranormal by doing some other experiment (with the same subjects or other subjects) that produces only chance results.  Similarly, if I do tests showing that some people have extraordinarily great memory recall, you do not debunk such tests by testing some other people who show only average memory recall. And if I do tests showing that on some days certain baseball hitters can hit baseballs into the bleachers, I do not discredit such evidence if I do other tests in which the same baseball hitters fail to produce such home runs.

Rosenthal's idea of debunking is to do something like cite on page 248 an analysis that claimed that "of the 332 experiments performed by PEAR between 1969 and 1987, only 71 gave results consistents with telekinesis, while 261 did not."  That would actually seem to be massive evidence that mind-over-matter or telekinesis can actually occur, since you never debunk a positive experiment for an irregular effect by doing some other experiment in which the irregular effect does not occur.

Rosenthal mentions the experimental evidence for precognition produced by professor Daryl Bem. As we read in Bem's original paper, one of his original experiments showed a success rate of 53.5% against an expected result of only 50%.  This was one of the less impressive positive results in parapsychology, with many other experiments showing success rates vastly higher than what should be expected by chance.  But still, given the number of participants (100) and the number of trials per subject (32), such a result is extremely unlikely to occur by chance. According to the binomial probability calculation below using the Stat Trek calculator, the chance of getting a result as good as this by chance is only about .00003. 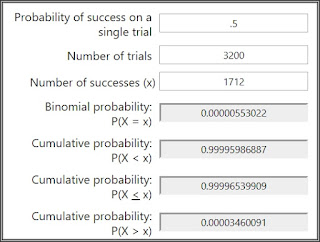 Rosenthal attempts to discredit this evidence by mentioning three unsuccessful attempts to replicate the experiment.  This is quite the outrageous case of cherry-picking. What he fails to tell us is that Bem's original experiment has been successfully replicated by far more attempts than those three replication attempts.  The meta-analysis here tallies all attempts to replicate Bem's original results.  Table 1 shows that when you tally the results from all of the replication attempts, you are left with a strong effect size, and a statistical significance that easily qualifies as good solid empirical science and good solid evidence for a very real effect.

On page 244 Rosenthal discusses the possibility of twin telepathy. The only evidence he mentions is some negative experiment done by a psychologist. He fails to mention any of the evidence on the topic reported by the Psi Encyclopedia.  In a large survey of twins in 1961, a full third reported that they could communicate by telepathy, particularly in times of danger. We also read this:

"Two ophthalmologists from Philadelphia published a brief paper in a leading science journal in which they claimed to have shown that telepathic influences could actually be instrumentally recorded. By artificially inducing alpha rhythm in one of a pair of twins, they showed that the other’s brain went into alpha at exactly the same time through what they controversially called ‘extrasensory induction.’ "

We also read this about 1967 results from a team at Rockland State Hospital:

"They used just one pair of twins, but reported confidently that ‘in a physically isolated subject, we have observed physiological reactions at the precise moment at which another person was actively stimulated’. They even printed the entire chart record ‘to show how obvious the [reactions] are.' "

The same Psi Encyclopedia tells us of a televised experiment and its aftermath:


"A popular television programme included an experiment in front of a live audience: here twin A, seated in front of a large pyramid, was put into a light trance state, while her sister B was in a distant and soundproof room wired to a polygraph that recorded her respiration, heartbeat, and galvanic skin response. After a period of relaxing meditation, the pyramid was made to explode with a loud bang, giving twin A a considerable shock. At the same time all channels monitoring B peaked sharply. This was a useful pilot project for more tightly controlled experiments to follow. It showed that when twins are carefully selected, as these were, and submitted to a surprise stimulus, they are far more likely to react than they might succeed in the type of telepathy experiment that involves guessing symbols on cards. Following this programme – along with a popular book and a journal article on twin telepathy – four similar experiments using the polygraph were shown on different channels. This gave some support to the view that telepathy can be shown not only to cause a physical response, but also to be instrumentally recorded as it does so."

These results are little known, so we can forgive Rosenthal for failing to mention them. But there is no excuse for failing to mention the very well-known research of professor Joseph Rhine and his colleagues in Rosenthal's 14-page chapter on the evidence for paranormal abilities.  Rhine produced enormously convincing evidence for telepathy, such as I discussed in my post "When Rhine and Pearce Got 'Smoking Gun' Evidence for ESP," and in my other post reviewing results such as Rhine reported in his monumental work Extra-sensory Perception After Sixty Years. Even greater evidence was produced by professor Riess, who (as I discuss here) did a remote-location test (involving 1850 card guesses) with a woman who guessed an average of 18.24 cards correctly per 25 cards, achieving a phenomenal 73% accuracy rate (instead of the expected accuracy rate of 20%).  This link estimates the chance likelihood of such a result as being about 1 in 10 to the 700th power.

Of course, we read about no such results from psi-denying professors such as Rosenthal, who are very careful to only mention weak or negative results in their books.  Similar cherry-picking might be involved if someone claimed that New England quarterbacks haven't been very good, and mentioned only the career of forgettable New England quarterbacks, failing to mention the case of six-time Super Bowl champion Tom Brady.
Posted by Mark Mahin at 8:54 AM 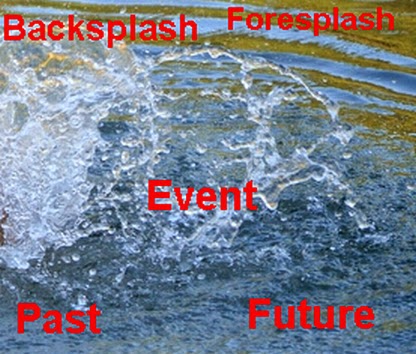