When Rhine and Pearce Got “Smoking Gun” Evidence for ESP

In the new book The Improbability Principle, mathematician David J. Hand spends a good deal of time attacking evidence for ESP (extra-sensory perception, commonly known as telepathy). His attack is something of a textbook example of the dubious rhetorical tricks and glaring omissions that a typical skeptic will use in addressing that topic.

In Chapter 2 of the book Hand looks at the research done by Joseph Rhine at Duke University during the 1930's, research which seemed to provide very compelling evidence for ESP. Hand begins by making the totally unconvincing suggestion that there may have been something wrong with dice Rhine used for some of his experiments, that they might not have rolled as randomly as casino dice. If there had been such a problem (such as a dice that preferentially rolled the number 6), it would have been noticed by any competent researcher. Hand then makes the insinuation that Rhine may have erred by searching around for talented subjects, stopping testing with subjects who showed no evidence of ESP. This, Hand insinuates, may have been some “selection effect” which might have skewed Rhine's results.

This criticism is invalid because it would only apply to tests involving a small number of trials, but all of Rhine's more convincing studies involved very large numbers of trials. Imagine I test 20 people for ESP, using only 20 attempts at guessing the symbol on a card that can have 5 possible values. If I throw out the 19 worst performers, and publish only the results of the person who did best, then purely by chance I might get something a little above what we would expect by chance. Purely by random chance, the best performer might guess 10 out of 20 cards correctly.


But imagine if I use a very large number of trials, having each subject try guessing the symbols on 10000 cards. Then, according to a mathematical law very well known to Hand (the law of large numbers), it should make little difference if I select the best of 100 performers (assuming the non-existence of ESP), because all performers should get results close to what one would expect by chance. All of the performers should have close to 2000 correct guesses out of 10000.

With a little programming, it is possible to simulate these type of trials, using some software code that makes use of a random number generator. I did just that, simulating 500,000 participants who each tried guessing 10,300 cards that can have one of five symbols. The best out of the 500,000 simulated participants scored 2256 successes, which isn't very much better than the expected chance result of 2060 successes.

Some of Rhine's most dramatic results were produced using Hubert E. Pearce Jr. as a subject. The research is described in detail here. The link mentions 10,030 trials in which Pearce scored 3746 successes (despite an expected chance result of only about 2060 successes). That is a result way, way better than the best result (2256 successes) that was achieved from my 500,000 computer-simulated guessers (each guessing 10,300 times). Such a result is very strong evidence for extra-sensory perception .

Of course, back in the 1930's Rhine was doing his research before the Internet was invented, working with a small staff, so we cannot assume that he tried testing anything like 500,000 people before coming on a result such as Pearce (or even 1 percent of that number). And even if he had, the odds would have been incredibly low that any of them would have scored by chance with a result anywhere near as good as Pearce's result (as my computer simulation indicates).

Hand mentions the case of Pearce, and he tries to leave the impression that Pearce's results were due to trickery.

Hubert Pearce Jr. guessed correctly around 32 percent of the time in hundreds of card-guessing experiments, compared with a chance expectation of 20 percent. Except, that is, when a magician watched him guess the cards, at which point his expectation fell to chance levels.

Clearly Hand wants you to draw the conclusion that Pearce was cheating, but he provides no clue as to how anyone could have cheated in such experiments (which had a protocol described below). In fact, Hand's claim is misleading. The link I just provided gives a table showing Pearce's performance in front of a succession of witnesses. When the magician was present, Pearce scored 92 out of 400 successes, a success rate of 23% that was above the expected chance result of 20 per cent (the results in front of all the other witnesses were much better). The link also reports, “Pearce was somewhat ill with tonsilitis on the day the magician was present,” which can easily explain the dip in his performance while the magician was present.

In the above link we also read these details about this magician witness:

The magician, Mr. Wallace Lee, tried a few series himself with only chance average results. He said frankly that he was convinced. It appeared that he was, at least as far as we all are, "mystified".

The experimental protocol is described below by Rhine, and it is not a protocol in which he can imagine any opportunity for cheating over a long series of trials.

The working conditions were these: observer and subject sat opposite each other at a table, on which lay about a dozen packs of the Zener Cards and a record book. One of the packs would be handed to Pearce and he be allowed to shuffle it. (He felt it gave more real "contact".) Then it was laid down and was cut by the observer. Following this Pearce would, as a rule, pick up the pack, lift off the top card, keeping both the pack and the removed card face down, and, after calling it, he would lay the card on the table, still face down. The observer would record the call. Either after 5 calls or after 25 calls,—and we used both conditions generally about equally—the called cards would be turned over and checked off against the calls recorded in the book. The observer saw each card and checked each one personally though the subject was asked to help in the checking by laying off the cards as checked. There is no legerdemain by which an alert observer can be repeatedly deceived at this.

The table below (from the link here) summarizes the results of Rhine's experiments with Pearce. These are tests in which the expected success rate is 5 out of 25, or 1 in 5. There is no way to work in some hypothesis of cheating with the results reported here. The table shows that Pearce got the same super-dramatic results even in a series of 650 trials when he was looking away from the cards, and also in a series of 300 trials in which there was a screen separating the cards and Pearce. 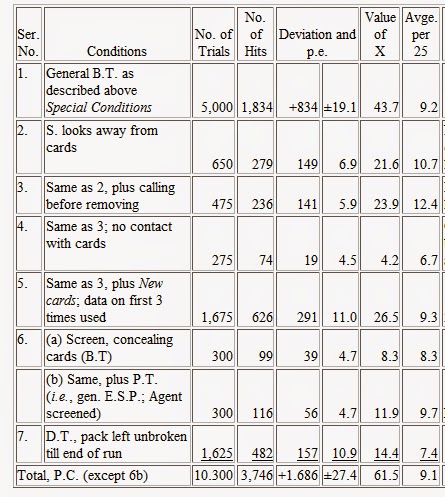 We can use the very handy binomial probability calculator at this site to calculate the likelihood of these results. The calculator gives a probability of simply 0 when we type in the overall results, so let's use a subset to try to get some non-zero result. Let's use only rows 2 and 6, involving either Pearce looking away from the cards or a screen between Pearce and the cards, either one of which should have ruled out any possibility of cheating. When I type these results in the binomial probability calculator, I get a result with a chance probability of 5 chances in 100 trillion, which we can round to be 1 chance in 10 trillion. This is a result we should never expect to get by pure chance even if we tested with every single person in the human race. 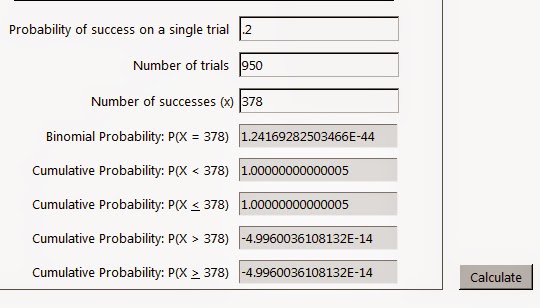 What we have in the case of Pearce and Rhine is a very well-documented case of experimental results far, far in excess of what chance can account for, what is basically “smoking gun” evidence of ESP. Mr. Hand is not at all able to debunk it. There is not the slightest reason for thinking that Pearce had any ability in magic, or that he could have used magic or fraud to achieve his results. Pearce went on to become a minister, and many years later sharply rebuked Martin Gardner when he asked (without any basis) for Pearce to confess to cheating.

What does Hand have to say about ESP experiments after Rhine? He tries to create the misleading impression that more recent experiences have not been as successful, by completely omitting discussion of the dramatic results of the ganzfeld experiments, and referring to, “the comments made by the believers in ESP and parapsychology as successive experiments failed to demonstrate the existence of the phenomena.”

The actual truth is very different. After Rhine's death, experimenters developed a protocol called the ganzfeld protocol, which involved ESP tests while a user had sensory deprivation such as halved ping-pong balls taped over their eyes. As described here, fifty-nine repetitions of such tests by various researchers produced an average successful match rate of about 30%, much higher than the 25% rate expected by chance. Rather than being a rare result that you only got with a few gifted subjects, such a result was repeated over and over again with a wide range of subjects. The odds of such results occurring by pure chance are similar to the odds of the Pearce results occurring by chance -- basically zero.

What does Page have to say about such experiments, which are the main type of recent ESP experiments? He says nothing. Instead, he wastes time on trying to debunk other ESP experiments no one has heard of. It's the old skeptic's strategy: if you don't have an explanation for some evidence for something you are arguing against, just ignore that evidence, and hope no one notices.

Page does put in a little sales pitch for the multiverse (the idea of a vast collection of universes). A good question for Mr. Page is: why would you have us believe in a multiverse (an infinitely complicated, boundlessly extravagant fantasy for which there is not the slightest bit of evidence), but discourage us from believing in ESP (a nice simple hypothesis for which there is abundant good experimental evidence that you haven't succeeded in debunking)?

Postscript: The original version of this post didn't even mention two other astounding cases nvolving Pearce. One was the Pearce-Pratt series of tests, conducted by Rhine's assistant J. Gaither Pratt. In this test, Pratt dealt out one card a minute from a shuffled deck. Pearce (located in a building far away) recorded his guesses as to the cards, at the same time. 1850 cards were dealt, and the expected chance success rate was about 370 cards. Instead, Pearce got 558 correct guesses. The chance probability of such a result was less than 1 in 10,000,000,000,000,000,000,000. In another informal test conducted in front of Rhine,  Pearce correctly guessed 25 cards in a row. The chance of that? One in three hundred quadrillion.

Postscript: See this post for my rebuttal of a skeptic's arguments against this evidence.  See this post for a discussion of an ESP test that got results even better than any test with Pearce  -- a phenomenal 73% accuracy rate on a test involving 1850 cards.

Email ThisBlogThis!Share to TwitterShare to FacebookShare to Pinterest
Labels: ESP