His “Spiritual Materialism” Is an Oxymoron

Nowadays the Templeton Prize has no such official title other than the Templeton Prize. But on the Templeton Foundation's page describing the prize, the prize is described in these terms: “The Prize celebrates no particular faith tradition or notion of God, but rather the quest for progress in humanity’s efforts to comprehend the many and diverse manifestations of the Divine.” The page also refers to “the John Templeton Foundation's mandate for breakthroughs in discovery and outreach with direct or indirect relevance to 'Spiritual Progress.' ” What is very strange is that the Templeton Prize has sometimes been given to those who seem to deny any spiritual realities or things such as manifestations of the Divine.

Let us take the case of the most recent winner of the Templeton Prize, physicist Marcelo Gleiser. Gleiser's opinions can be read in his blog posts at this site. The 2019 posts are rather vague and bland about ideology. But in a post from September 2018 entitled “Spiritual Materialism,” Gleiser calls himself a materialist. After a section heading of “Only Matter Exists,” we read the following:

“We must, first and foremost, eliminate the connection between spirituality and spirit, in particular, of spirit as a supernatural manifestation. As I am sure Democritus, Lucretius, and Einstein would agree, the starting point of the argument is that only matter exists. There is only the natural.”

This is the doctrine of materialism, that only matter exists, and Democritus and Lucretius are two of the five most famous atheists. Materialism can be concisely described as atheism on steroids. An atheist is someone who rejects the idea that there is some Supreme Spirit. A materialist is someone who goes further, and rejects the idea that there is any type of spirits or souls whatsoever, either in living human beings or in some post-mortal or otherwordly realm.

Of course, there is nothing the least bit spiritual about materialism. When I search for a definition of spiritual, I get two definitions:

1."Relating to or affecting the human spirit or soul as opposed to material or physical things."
2. "Relating to religion or religious belief."

Materialists do not believe in any such thing as spirits or souls, and reject all religious belief. So Gleiser's “spiritual materialism” is a self-contradictory oxymoron, like the concept of a square circle. Materialism make no philosophical sense for an abundance of reasons, such as the sudden unexplained origin of the universe, the extremely precise fine-tuning of the universe's laws and fundamenal constants, the impossibility of credibly explaining the origin of life through chemical effects, the apparent impossibility of explaining either the protein complexity or morphogenesis of a human through mere physical effects (without resorting to "DNA as body blueprint" myths), the very large body of evidence for psi and paranormal phenomena, and the utter inability of material effects to credibly explain basic human mental abilities and effects such as consciousness, abstract reasoning, instantaneous memory recall and the 50-year retention of memories, the latter not being explicable by a brain in which synapse proteins have an average lifetime of only a few weeks. The human mind and human mental experiences cannot be credibly imagined as something material.

Materialism also makes not a bit of sense from a physics standpoint. As the study of physics constantly involves you in important aspects of physical reality that are not matter (such as pure energy and the laws of physics), any competent physicist should be ashamed to call himself a materialist. We are here partially because of an abundance of physical laws that end up permitting habitable planets such as ours and organisms such as ourselves. An example of such a law is the law of the conservation of charge. When high energy particles collide, you might think that protons (with 1836 times the mass of electrons) would be created vastly less often than electrons. Instead electrons and protons are created in exactly equal numbers. The result is a planet like ours with an equal balance of positive charges and negative charges. Were it not for such a law of nature, we could not be here, there being various reasons why life would be impossible if electrons were 1836 or even a hundred times more common than protons. Laws such as this are not matter; the four fundamental forces of nature (including gravitation) are not matter; and the fields and the energy particles that fill the universe are also not matter. So a physicist should know better than anyone the folly of saying “only matter exists.”

In another blog post entitled, “Does Life Have a Purpose?” Gleiser gives us the answer that “there is no such thing,” and that “our intelligence is not part of a grand plan.” These Gleiser statements are inconsistent with what physicists know about the extremely precise fine-tuning of the universe's fundamental constants, such as the very precise equality (a difference of less than .0000000000000000001) between the absolute value of the charge of every proton and the absolute value of the charge of every electron (an exact match necessary for our existence). Such precision seems to suggest a grand plan. But such Gleiser statements are consistent with his previous statement of materialism, that only matter exists. In these two blog posts Gleiser seems to reveal himself to be an opponent of the core notions of those who are spiritual and religious. 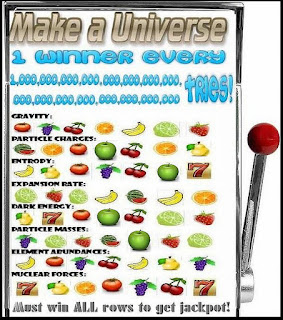 The kind of luck needed for a habitable universe

A similar very puzzling choice occurred when the Templeton Prize was awarded to cosmologist Martin Rees years ago. I rather doubt that you could ever find any spiritual-sounding thing Martin Rees had ever stated, although you could easily find some moral statements he had written. Rees has stated, “We are the nuclear waste of stellar fusion,” which concisely states his view that we are just random accidents. He has also stated, “What I would like best would be for scientists not even to use the word 'God.' " Note the words "like best," as if such a thing is his heart's fondest desire. That seems to suggest a very irreligious view.

Email ThisBlogThis!Share to TwitterShare to FacebookShare to Pinterest
Labels: materialism