War of the Future: A Science Fiction Story

War of the Future The greatest triumph in the history of the United Nations was the Convention Against Military Bloodshed of the year 2041. The international agreement banned the use of any military technology designed to shed human blood, from the year 2045 onward. The treaty was signed by the United States of America, China, the Russian Federation, the European Union, and every other member of the United Nations.

Following the treaty, the nations of the world reorganized their weapon systems. It was now an international crime to shed any human blood in warfare. But warfare was not prohibited, as long as it involved only robots.

Many argued that the Convention Against Military Bloodshed would mean that no major war would ever be fought again. But they were wrong. In the year 2051 the Euro-American War erupted between the forces of the European Union and the forces of the United States of America.

The main cause of the war was the decision of the United States of America to default on its 30 trillion dollar debt. This decision enraged the European Union and its citizens, which owned 7 trillion dollars in US debt that suddenly became worthless.

For the next two months there was no significant action in the war, except for computer warfare fought between the United States and the European Union. Both sides launched hackers and viruses against each other, disabling many important websites and computer systems. Millions in the US and Europe had their computers wiped out because of computer viruses.

Both the United States and the European Union had built purely robotic aircraft carriers, missile frigates, and landing ships. The ships could therefore fight it out in the ocean without any risk of violating the Convention Against Human Bloodshed. The action raged for two day days. Many hundreds of drone bombers were launched from automated aircraft carriers, attacking ships from the other side.

By the time the smoke cleared, the United States invasion fleet had been sunk by the fleet of the European Union. All combat took place between entirely robotized vessels.

Several months later the European Union launched its own invasion fleet across the Atlantic Ocean. The two opposing fleets met a few hundred miles off of Newfoundland. Badly damaged and weakened in numbers by the previous naval engagement, the US robotic fleet was decisively crushed by the European Union robotic fleet. Many ships were sunk, but no human drowned.

The action on the shores of North Carolina and South Carolina consisted purely of robots fighting robots. When the fighting ended, some 15,000 state-of-the-art robots of the United States had been destroyed. The beaches were littered with countless wrecked and scorched robots that children would be playing on for decades to come. 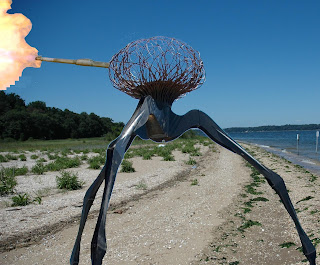 At the White House the US President and his advisers discussed what to do next.

“Perhaps we can use human soldiers to join in the fight,” said the Secretary of Defense. “We have more than 100 million people who can fight.”

“You mean turn this into a war in which people are actually dying?” said the President. “Unthinkable. We would be violating the Convention Against Military Bloodshed, and would be international outlaws.”

The United States caved in. It revoked its decision to default on its debt. The bond holders in the European Union were overjoyed. The war was ended. As part of the peace treaty, the horde of robots landed by the European Union were left in North Carolina and South Carolina, as an insurance policy against future default actions by the United States.

“It was a lovely little war,” said the President of the European Union. “Best of all, not a single person died.”

The US President didn't think the war was so lovely, as he was told it would cost 500 billion dollars to replace all the military equipment the country had lost.
Posted by Mark Mahin at 6:27 PM