Low Gravity Hero: A Science Fiction Story On Noro's planet the air was thin, many trees grew to a height of 70 meters, and there were mountains twice as high as Mount Everest. Noro lived far away from Earth, on a small planet with only half the mass of Earth. The gravity on the planet was much weaker than the gravity on Earth.

Noro's tribe was not very advanced. The tribe consisted of about 40 people who lived in a small village. They had some good metal tools, but knew nothing of electricity or electronics. Noro and his family worked on a small farm, but it could not produce many crops, because the soil was not very fertile.

Noro was two meters tall, but that was much smaller than the average person in his tribe. Because of his below-average height, Noro was called Little One by his peers. He hated the nickname. Noro's peers often teased him about being so short.

Noro had a huge nose and very large lungs that allowed him to breathe the thin atmosphere of his planet. The atmosphere of Noro's planet was filled with a very small free-floating primitive plant organism. Because of the weak gravity, the tiny plant organism was able to stay suspended in the air, blown around by the strong winds.

Noro and his fellow tribesmen could not make any use of the tiny plants floating in the atmosphere, which were too small to be gathered up in a net. But there were much larger creatures that could breathe in the tiny plants floating in the air. These creatures were the animals that Noro and his tribe called the Sky Whales. The Sky Whales were like huge floating balloons that drifted across the sky, sucking in the tiny free-floating plants, like earthly whales sucking up plankton.

Members of Noro's tribe had sometimes spoke of hunting the Sky Whales with bows and arrows, but no one had taken the idea very seriously. The Sky Whales would make a great source of nutrition, but they floated too high in the sky for an arrow to hit them.

But one day Noro came up with an idea for how to hunt the Sky Whales. He would climb to the top of a huge mountain. He would bring a spear with a rope attached to its end. Noro planned to wait for a Sky Whale to pass by, and then lunge the spear at the creature. He would then pull the rope to drag in the creature.

His tribe members laughed at this scheme, saying it would never work. But Noro was determined to try it. For months Noro practiced throwing spears to improve his accuracy and strength. He practiced climbing higher and higher up the mountain. Then one day he set out, determined to travel all the way to the top of the mountain. After passing through some treacherous passages where he almost lost his footing and fell to his death, Noro made it to the peak of the mountain, where he had a breathtaking view. 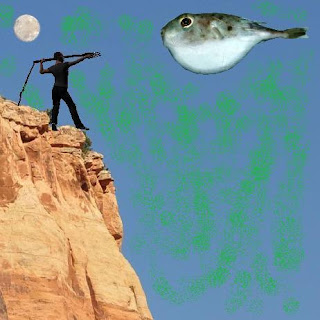 A few hours later, a Sky Whale drifted by. Noro speared the huge creature on his first try. Pulling with all his might on the rope attached to the spear, he was able to drag the Sky Whale to the summit on which he stood. This was possible because the Sky Whale wasn't very heavy, and its huge air-filled lungs made it almost as easy to drag as a big balloon.

When Noro returned to his village dragging the Sky Whale, he became the hero of his village. Many other men went forth to duplicate Noro's feat, and demonstrate their own bravery. The village soon had a new source of food that ended hunger in Noro's tribe.

One year later Noro thought of an even more audacious way to prove his bravery. He came up with an outrageous plan. He would be the first of his tribe to fly like a bird.

Noro did not intend to build an airplane, something that was utterly beyond his imagination. He had a much simpler idea. He would attach to his arms two long wing-like attachments. Then he would jump off a cliff, and start flapping his arms furiously. Noro thought that if he made the artificial wings well enough, he would actually be able to fly. Of course, such a thing would never work on Earth, but Noro lived on a low-gravity planet, where such a feat was quite within the realm of possibility.

Noro told his mother about his strange plan.

“You want to jump off a cliff and fly like a bird?” said Noro's mother. “You must be crazy! You will fall to your death. No one has ever done such a thing.”

“Mother, the Sky Whales stay in the air without any wings,” said Noro. “If I have good strong wings, for sure I should be able to fly.”

Noro's mother pleaded with him to give up the wild scheme, but Noro could not be persuaded. For months, the adventurous youth experimented with different types of artificial wings. Finally he made a pair of artificial wings that satisfied him. The wings were made with the gut linings of various animals, which he had sewed together. The wings also had many feathers Noro had collected, which he attached to the wings using a glue-like tree sap.

Finally the moment of truth came. Noro stood on the cliff, wearing his artificial wings. Twelve spectators from his tribe were watching.

“Little One, you have already proven your bravery by spearing the first Sky Whale,” said one of Noro's friends. “You don't have to do this.”

Noro started flapping his artificial wings frantically. On Earth he would have plunged to his death, but the gravity of his planet was so low that Noro was able to fly like a bird, traveling more than 200 meters before finally landing.

From that day on, flying became a very important part of the culture of Noro's tribe. Many a brave tribesman repeated Noro's feat, and before long both males and females could be seen flapping artificial wings, flying through the sky like birds.

The tribe stopped referring to Noro as Little One. For the rest of his life he was called Sky Conqueror.