The Man of the Future Visualized 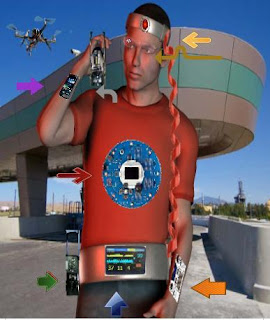 The colored arrows point to particular features in the picture. Let us look at each of these features.

The Cyborg Belt serves two purposes. First, it serves as a monitor of all of the future man's bodily functions. The future man does not have to go to a doctor for a physical examination to find out how his body is doing. He need merely look down at the vital signs display on his belt. If there is any medical problem such as high blood pressure, cancer, or high cholesterol, the vital signs indicator on the Cyborg Belt will alert the man with a flash of warning messages.

The Cyborg Belt also stores a powerful computer that is linked to the man's brain by means of the red retractable wire and the band on the man's head.

The orange arrow points to the future man's Supercard. The Supercard is like an identification card, a credit card, a bank ATM card, and a passport, all rolled into one. The Supercard is embedded into the future man's flesh, so there is no chance of him losing it. It is good that the future man cannot lose his Supercard, because if he lost it, it would be impossible for him to function in the complicated society in which he lives. Since every future citizen has his Supercard embedded into his flesh above his wrist, there is no danger of one person pretending to be another.

The gray arrow points to the future man's drone controller. The future man can summon his personal flying drone, put some shopping bags in his drone, and then instruct the drone to drop the bags back at the man's home. This way the man doesn't have to carry the heavy bags all the way home.

The red arrow points to the future man's Thorax Interface. This is a system of electronics connected to the man's heart and lungs. If the future man needs to do something particularly strenuous, requiring more work from his heart and lungs, he need merely plug a new electronic module into this interface, just as you might plug a unit into the USB port of your computer. The Thorax Interface has a circular door that can be opened like the door of a safe. This makes it very easy for doctors or robots to quickly perform surgery on his internal organs.

The green arrow points to the future man's Portable 3D Printer. This is occasionally very useful for creating small items that the man may need. For example, if the future man scrapes his leg while out hiking in the woods, he can use his Portable 3D Printer to print himself a bandage he can place over the scrape. Or if the man needs some small mechanical part, he can print out the part instantly, rather than going to the trouble of shopping for the part at a store.

The purple arrow points to the future man's embedded smart phone. The future man can send text messages by speaking. The paper-thin smart phone is embedded into the man's flesh, so he need not worry about forgetting to bring his phone when he goes outside. Recharging is not a worry, as the phone has a solar panel which recharges the phone whenever the man goes into the sunlight.

120+ Types of Paranormal or Anomalous Experiences

It may be useful to attempt a classification scheme for reports of the paranormal or anomalous. For the sake of including as many types of o... 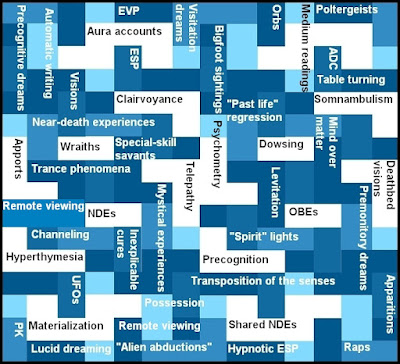