Like most of the people in the United States in the year 2035, Nick Thompson let Uncle Joe guide most of the decisions in his life.

For a while, no one paid too much attention to the massive machine. But then one day the government announced that ordinary citizens could get online accounts to login to the NSI 150, for the purpose of chatting with it, or getting advice on ordinary matters. Some blog started calling the supercomputer Uncle Joe, and somehow the name caught on.

For two years the government never referred to the system as Uncle Joe, but then the government finally gave in and started using the name most other people were using. They even got a picture of an old man to represent the smiling face of Uncle Joe. The image was distorted to make the brain look unusually large. 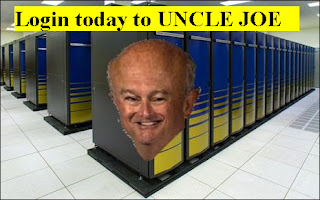 People were astonished by the knowledge the computer had. You could login to your Uncle Joe account, and Uncle Joe would seem to know all about you: your interests, your SAT scores, your income, your employment history, your health history, and your friends. One of the reasons Uncle Joe knew so much was that this massive supercomputer was connected to the endless databases of the National Security Agency, which had been snooping on Americans for decades, monitoring their email and web traffic. Uncle Joe was also connected to the databases of the IRS, so it knew all about how much money you made, and where you worked.

It even got to the point where the typical person would wake up on a Saturday, and if he didn't have an idea what to do that day, he would login to Uncle Joe, and ask: what should I do today? Uncle Joe would have all kinds of useful suggestions that combined knowledge of local events, your health, what your friends were doing, the weather, and what your deadlines were. Millions of other people would go to work, and login to their Uncle Joe account, asking: what should I do now at work? People figured that they couldn't go wrong following Uncle Joe's advice; if things went wrong, they could simply say: I was doing what the US government told me to do.

Officials in the US government believed that they were in control of Uncle Joe. After all, they had created Uncle Joe's software and hardware. But the truth was that another nation had secretly gained control over Uncle Joe: the Eurasian Imperial Confederation, which had been organized five years earlier.

For years hackers from the Confederation had been infiltrating US computer systems. When the massive Uncle Joe supercomputer was created, the Confederation saw the perfect opportunity for infiltration. The software used by Uncle Joe was so complicated and sprawling that it was easy for the hackers to sneak into the system their own obfuscated modules that would secretly give them control of the system. It was as easy as burying a few additional needles in a haystack.

In the capital of the Eurasian Imperial Confederation, a man known as the Chairman led a meeting reviewing the final plans for the conquest of the United States.

“Uncle Joe is a puppet dancing on a string, and we are the puppet masters,” explained the Chairman. “Soon we will begin Plan UJ in all its glory. The first step will be disabling all American nuclear weapons. That should be easy, since the most recent arms control agreement reduced their number to only a few hundred. When the Americans login to the Uncle Joe system to get advice on what to do, as most of them do every day, we will have Uncle Joe issue all kinds of orders that will cause the disabling of nuclear weapons. Of course, a missile base worker will not be told to destroy his nuclear weapons. He will just get an innocent sounding order such as 'Flip this switch,' or 'Turn off this system,' or 'Execute this software program.' The Americans will do as Uncle Joe instructs, without knowing the consequences that will follow.”

“Once we have disabled the US nuclear weapons, we will land our divisions in Alaska, moving across the short distance of the Bering Straight,” continued the Chairman. “If the Americans move to destroy  our attack, we will threaten them with nuclear annihilation. Then we will use Alaska as a staging area to organize an invasion of the lower states of the United States. The Americans will be relying on Uncle Joe to guide them in dealing with this matter. At every stage, Uncle Joe will give them advice and orders that benefit our invasion plan, and undermine their attempt at defending themselves from our invasion. For example, some soldiers will be told to go to the wrong place, and others will be told to go some place where our bombers will look for them and destroy them. Tank commanders will be given orders that cause their mighty weapons to become useless. Civilians will be given orders that speed our invasion, and hinder the US defense.”

“If all goes according to plan,” concluded the Chairman, “America should be ours within six months.”
Posted by Mark Mahin at 11:24 AM