Many a person overestimates the knowledge of scientists, perhaps thinking, "If you are a scientist, you know all that science stuff." That's not at all true. Most scientists are specialists who concentrate their studies in some narrow field of study.  Science is divided up into several general fields of study, such as psychology, biology, physics, chemistry, and sociology. Within each of those fields of study are many sub-fields of study. Typically when a scientist gets a master's degree and then a PhD, he specializes in one of these sub-fields. The result is that the learning of the scientist may be a very narrow and very limited type of education.  The scientist may end up as a kind of straw-hole scientist, one who spends most of his career examining one very narrow line of evidence.

For example, someone getting a PhD in the biological sciences may concentrate his studies in any of the following sub-disciplines: 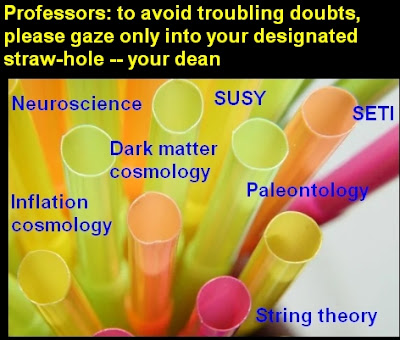