The 1968 science fiction movie 2001: A Space Odyssey directed by Stanley Kubrick was one that I greatly enjoyed when I was a boy. As I teenager I enjoyed it so much that I kept seeing it many times in movie theaters. 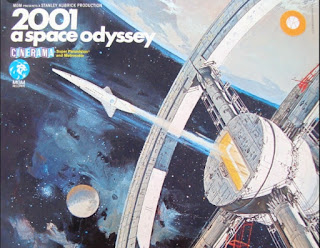 Soundtrack album for the movie, with art by Robert McCall

Casting a strange spell on many a viewer largely because of its quirky directorial flourishes and superb visual design, the movie had quite a few memorable moments, and succeeded greatly in creating a feeling of cosmic wonder and awe. But looking back on the movie today, I now realize that there were many aspects of the movie that made no sense at all. Let me list 13  such things.

Senseless thing #1: the title "The Dawn of Man" at the movie's beginning.

2001: A Space Odyssey opened with a title sequence that worked when you saw in the theater, as it used a piece of music that sounded fresh and dramatic in 1968, but which now sounds very banal and stale because it has been used in hundreds of TV commercials.  We then saw the title "The Dawn of Man," and a sequence involving ape-like organisms three million years ago. The sequence involved a cinematic depiction of the first tool use by organisms, the use of bones as weapons. But the idea of equating tool use with humanity is a fallacious one. We now know quite a few animals use tools, and it is wrong to think that some ape-like animals would have qualified as humans once they started using bones or rocks as tools. The real defining characteristic of humans is the use of language and symbols.  So it made no sense to use the title "The Dawn of Man" for a depiction of ape-like organisms that had merely started to use bones as tools.

Senseless thing #2: the depiction of the monolith triggering the first use of tools.

Early in 2001: A Space Odyssey we see some ape-like organisms witness the strange appearance of a black monolith. Then we see one of these organisms ponder some animal bones. The movie cuts to a shot of the black monolith, and then goes back to the ape-like organism pondering the animal bones, who eventually uses one of the bones as a tool. Clearly the implication is that this monolith is somehow causing the ape-like organism to get the idea of using a bone as a tool.  But how could that have happened? In an early draft of the script or its corresponding novelization, the monolith displayed a kind of instructional video, but such a thing does not appear in the movie. We are left with the idea that the monolith has somehow prodded these organisms to start using tools, but the movie gives us no idea how that could have happened.

Senseless thing #3: Heywood Floyd riding as the sole seated passenger in a spacecraft with many seats.

After the scenes set in Africa millions of years ago,  2001: A Space Odyssey abruptly moves to a depiction of space flight in the year 2001. We see a NASA official named Heywood Floyd riding as the sole seated passenger in a spacecraft with many seats (30 or more).  Space travel is extremely expensive, and it is unrealistic that such a large vehicle would be used to transport a single passenger (who the movie does not depict as doing anything very important).

2001: A Space Odyssey failed to correctly depict the way the planet Earth looks from space. Instead of showing a planet only partially covered with clouds, the movie depicted the planet as being entirely bluish-white, covered with clouds.  There is no excuse for this, because from the fact that it is always sunny on at least 30% of the globe, anyone could have figured out in 1960 how our planet would look when seen from space (with plenty of green and brown visible, because only about half of the surface was covered with clouds).

After showing Heywood Floyd reaching a space station with a rather ridiculously roomy interior, 2001: A Space Odyssey then shows Heywood traveling to the moon, again as the sole seated passenger in a very large craft with enough seats for 30 people. He doesn't do anything important when he gets there, other than give a short speech telling a few people  what they already knew. Floyd and some others then visit a site where a mysterious black monolith has previously been discovered.  While viewing this monolith, Heywood Floyd and the others suddenly hear a deafening radio signal. It is the monolith transmitting a signal to Jupiter.  Heywood Floyd and the others (wearing space suits) are picking up this radio transmission in their space suits. But such a transmission would have occurred using any one of a million radio frequences, and it is most unlikely that the space suits of Floyd and his colleagues would be using exactly the same frequency that the monolith used.

Senseless thing #6: the depiction of a manned mission to Jupiter around the year 2001, with hibernating astronauts.

Senseless thing #7: the depiction of an intelligent computer in a movie set around the year 2001.

2001: A Space Odyssey was ridiculously over-optimistic about how long it would take humans to construct artificial intelligence smart enough to understand human speech.  The movie depicted such artificial intelligence as being available around the year 2001. It is now the year 2021, and we are nowhere close to creating some computer intelligent enough to understand human speech and engage in meaningful conversations.  There are computer programs called chatbots, but they have no real smarts, and rely on a variety of tricks such as asking questions related to what someone said.

Senseless thing #8: the depiction of the intelligent computer HAL lip-reading and murdering.

2001: A Space Odyssey depicts its intelligent computer HAL 9000 as lip-reading (a skill a computer would not have), and also murdering. The movie never gives an explanation of why the computer HAL 9000 engaged in murder.

Senseless thing #9: the astronaut floating inside the intelligent computer, with an interior consisting of mostly empty space.

In 2001: A Space Odyssey after the computer HAL 9000 murders one of the astronauts, it tries to murder the second astronaut (David Bowman), who is able to escape danger, and turn off the computer. We see David Bowman enter into the computer's interior. Is it all crammed with circuits and transistors? No, it's mainly just empty space.  How could a computer consisting of mainly empty space be so smart? And why would they use space so wastefully on an interplanetary mission?

Just before astronaut David Bowman goes off on a strange puzzling trip "beyond the infinite," to use a phrase used by an explanatory title appearing in the movie, we see five moons of Jupiter aligned in a stack above Jupiter, and the mysterious monolith floating in a way that lines up with this stack.  This is never explained. The chance of such an alignment happening by chance is less than 1 in 1,000,000,000. We can imagine no reason why the intelligence represented by the monolith would want to cause such an alignment.

After we see David Bowman in a little vehicle outside of his spaceship, he goes on some strange journey that is not explained in the movie. We see him traveling through dazzling planes of light, and we see what looks like landscapes of other planets.  But how did he get to such planets? This is not explained at all in the movie.

Senseless thing #12: the aging and rebirth of David Bowman in the strange white room.

At the end of the strange trip, David Bowman finds himself in a brilliantly lit room. He finds himself getting older and older. Why does this happen? The movie never explains this. Eventually David (as an old man) encounters the mysterious black monolith in this strange room, and we see David turn into a kind of embryo.  There was a  novel released at the time of the movie, written by Arthur C. Clarke, the co-writer of the screenplay along with Stanley Kubrick.  It tried to depict this scene as some depiction of super-advanced extraterrestrials (abstractly depicted by the monolith) propelling a human (David Bowman) to a new stage of evolution. But how would you get a new stage of evolution by turning a man into an embryo? It all makes no sense.

The end of the movie is supposed to be awe-inspiring. We see the embryonic David Bowman floating in space, near Earth. But this is pure craziness, for two reasons. First, David Bowman had traveled to Jupiter, so why are we now seeing him floating close to Earth? Also, the embryo figure is floating by itself in space, which would instantly kill any embryo. Since 1968 we have learned more and more about the abundant dependencies of living things, how they can only exist because of so many surrounding things being just right, such as fine-tuned fundamental constants of nature. In light of such knowledge, a scene of an embryo floating by itself in space seems all the more absurd.

Before making 2001, Stanley Kubrick was scornful of all previous science fiction movies, and said his goal was to make "the proverbial good science fiction movie." This didn't make sense, because there were several first-rate science fiction movies made long before 2001 appeared in 1968, including The Day the Earth Stood Still, Invaders from Mars, Village of the Damned and Forbidden Planet. Forbidden Planet handled very intelligently the theme of super-advanced extraterrestrials, in a way much more intelligible than the strange confusion of 2001: A Space Odyssey, a movie that ends up like some hallucinatory drug trip.

The "Dawn of Man" depiction in 2001 is the most famous attempt to do a cinematic depiction of Darwinian ideas, and even in this case we do not have a depiction of a natural origin of man (since the mysterious power behind the monolith is intervening in things).  I predict that we will never see in cinema any fictional movie depicting a real natural "dawn of man," which would be a natural origin of language. If you tried to put such a scene in a film, it would never work, and no one would believe it. Creatures that had not previously used a language would never start using a grammar, and if they tried to start talking, they would sound like they had rocks in their mouths (since organisms that had never used speech would never have the right mouth equipment for ungarbled speech).  No organism belonging to a group that had never used speech would ever conceive of the idea of using speech and a language, and if an organism had such an idea, he would never be able to transmit it to his fellow organisms so that a group would start using speech. If there was no language, there would be no way for an organism to start communicating to some other organism an idea such as "let's start using the word 'rocks' to refer to rocks."  Because the origin of language is naturally inexplicable, there would be no way for a filmmaker to credibly depict any such thing as a real natural "dawn of man."

Postscript: In 1968 Stanley Kubrick made one of the worst predictions ever, stating this: "Within 10 years, in fact, I believe that freezing of the dead will be a major industry in the United States and throughout the world; I would recommend it as a field of investment for imaginative speculators."