Scrolling through the science news headlines these days you will get many interesting-sounding headlines, although most of the more interesting headlines are clickbait and hype which lead to disappointment when you read the story. Again and again, some unimportant research or dubious claim will be announced with some headline that makes you think some epic breakthrough was made. The progress of science these days is actually fairly slow.  But it would be a totally different situation if the belief dogmas of materialists were true.  In such a case the science news would be many times more interesting than the science news you'll read today.

Let's consider natural history. A belief dogma of materialists is that earthly organisms all arose through gradual Darwinian evolution.  If that were true, there would be millions of transitional fossils all over the place, so many that the discovery of missing links would be announced all the time. It would happen so much you would get sick of hearing about it. Upon reading the seventh story you read this week about a discovery of important missing links in evolution, you might say, "Enough with the missing links already."

Were it true that random mutations can yield important biological innovations, we would read on our science news sites an abundance of headlines telling how some new biological wonder was produced in a laboratory experiment.  If we read the news stories matching the headlines, they might say something like, "Scientists have produced yet another new organismic innovation by exposing some animals to radiation that caused mutations."

If it were true that Darwinian processes of random mutation and survival-of-the-fittest were capable of producing great marvels of innovation,  then software engineers would utilize such a thing to easily produce new computer programs. We would have a constant stream of stories telling about how some marvelous new computer software innovation was produced by some software-generating computer program that used an evolutionary approach to computer programming.

If it were true that brains are the source of human thinking, scientists by now would have discovered some principle by which matter can produce thinking, and would have leveraged such a principle to create super-intelligent computers.  So our science news stories would frequently give us stories like this: "Scientists created a new electronic super-brain with an IQ of 10,000, vastly surpassing their previous best effort, which only had an IQ of 8000."  There would probably also be stories of thinking caps that allowed you to expand your creativity or imagination by a factor of five or ten times.

If it were true that human memories are stored in brains, we would have very many extremely interesting memory-related news stories in our science news feeds.  Scientists would be able to read memories from brains, which would be the source of countless fascinating stories. For example, there might be a story telling how memories were read from the mind of an executed prisoner, to try and find out for sure whether he was really a murderer.  Or there might be a story telling how biographers were working with scientists reading the memories of an important person who recently died, so that the biographers could find additional details about the person's life experiences, by reading the dead person's memories.

If it were true that human memories are stored in brains,  the science news would also have stories of new companies that specialized in surgical removal of unpleasant memories.  There would also be stories of companies providing the service of letting you read all the memories of your parent after that parent died. Our science news sites would also have fascinating stories about how some people were skipping old-fashioned universities, and instead paying for neural knowledge downloads that allowed them to learn much faster.
If it were true that brains produced ideas and understanding, there would surely be some way to artificially cause humans to produce more ideas and much greater understanding.  So we would probably read our science news sites announcing on a regular basis that some brilliant new idea or some wonderful new insight about nature had come after some scientist had zapped his brain with electricity, or taken some pill that sped up the chemistry of his brain.
If it were true that our brains store beliefs, scientists would have found exactly how such beliefs were stored, and we would therefore read very interesting news stories about how scientists are changing people's beliefs by erasing beliefs from particular parts of the brain, perhaps with an electrical jolt. People belonging to some religion or political group would be very worried that a person might lose his religion or political affiliation because of some scientist zapping his brain, erasing particular beliefs.

Were it true that life is mere chemistry, and that minds arise from mere brain activity, it would almost certainly be possible to revive dead people by restarting their hearts. In that case we would have all kinds of fascinating stories in our science news feeds telling about modern day Dr. Frankensteins who were able to revive people who had died hours or days ago. 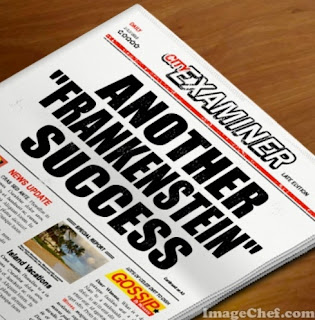 In such a case we would also read on our science news sites  interesting stories debating whether the right to be revived after death should be considered a basic human right available to all.

Were it true that life arose from mere chemical processes, we would read in the science news all kinds of fascinating stories about how scientists had created life from scratch in a laboratory, through some experiment that simulated the early Earth.  If it were true that life can accidentally arise from mere chemicals, and that large organisms and mankind arose merely because of Darwinian processes of random mutation and survival-of-the-fittest, it would almost certainly be true that our galaxy would be filled with intelligent life. For there are billions of solar systems in our galaxy.

In such a case, the science news would be so much more interesting. We would have a constant stream of stories telling about how scientists had detected radio signals from yet another civilization in space. Since it is easy to transmit images by radio using a grid system in which radio blips stand for pixels, every year would bring a bonanza of new images showing extraterrestrials and their strange cities on other planets.
If it were true that elevated emotions such as love were merely the products of brain chemistry, then we would probably read on our science news sites some very interesting stories such as accounts of neuroscientist marriage counselors with the power to fix up broken marriages by merely restoring the brain chemistry of the wife and husband as it existed when they were madly in love.  We would probably also read many science news stories about neuroscientist love potions and love-at-first-sight perfumes, or about politicians or clergymen who produced certain emotions in their audiences by simply sending out particular types of aromas laced with the right type of chemicals to produce some emotional effect.

But we have no such stories on our science news sites.  Our actual science news sites are relatively boring. You will often read sensational-sounding headlines, but almost always when you click on the headline and read and critically analyze the story, weighing it against the standards of robust observational science, you will find that you have been lured by some clickbait hype, and that there's "not much there there" in the story.

Our science news feeds would also be so much more interesting if scientists were to allocate their research dollars more intelligently.  For all practical purposes there is pretty much in effect the rule that research dollars should almost all be spent trying to confirm things that scientists believe in. But imagine if scientists paid no attention to their beliefs when allocating research dollars, and instead followed the rule that research dollars should be spent in proportion to how much something has been observed or reported. Then scientists would not waste countless billions of dollars trying to prove hollow boasts and ideas that are not based on observations, but would instead spend a great deal of time investigating phenomena that have often been reported, but which scientists don't care to believe in. Then our science news feeds would be so much more interesting, and would frequently report research results regarding many fascinating spooky things that very few scientists today investigate, because of fear of throwing doubt on their cherished assumptions.
Posted by Mark Mahin at 8:19 AM