When Science Books Have Misleading Titles

An example was the book Almost Human: The Astonishing Tale of Homo naledi and the Discovery That Changed Our Human Story. The book is by two paleontologists named Lee Berger and John Hawks. A person buying the book would have expected to read about the discovery of some form of life that was almost human.

Another science book with a misleading title is the book on DNA entitled How to Code a Human: Exploring the DNA Blueprints That Make Us Who We Are. But DNA is not actually a blueprint of a human or a program for making a human. DNA is mainly just a database of some low-level chemical information used by humans. The book does not at all explain how to code a human, nor does it refer us to anything that specifies the human form, DNA being no such thing. Similar sins of misrepresentation have been committed by countless science books which have perpetuated what I call the Great DNA Myth, the myth that DNA is a human specification.  Read here for the reasons why DNA cannot be any such thing.  Read the end of this post for quotes by quite a few scientists saying that DNA is not a blueprint for a human and is not a program for making a human. 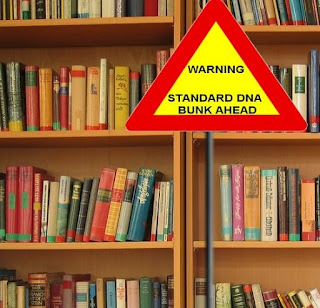 A famous science book with a misleading title is Charles Darwin's book On the Origin of Species by Means of Natural Selection, or the Preservation of Favoured Races in the Struggle for Life. The reason why the title is misleading is that while it used the term “natural selection,” Darwin did not actually specify a theory of nature choosing things or selecting things. He merely specified a theory of survival-of-the-fittest or differential reproduction (the superior reproduction rate of fitter organisms) that was given the catchy but misleading name “natural selection.” Selection is something only done by conscious agents, and Darwin did not believe that nature was a conscious agent.

The title would not have been misleading if Darwin had actually theorized that nature is conscious and can make choices. Such an idea has been advanced by a few thinkers, including some who have thought that planet Earth is a living entity, a conscious kind of “mother Earth.” But Darwin did not expound any such theory, and did not believe that nature made anything resembling a choice made by living beings. It was therefore misleading of him to use the phrase “natural selection” for a theory that was not actually a theory about choices selected by nature, and that could have been more honestly described as simply “survival-of-the-fittest” or “differential reproduction.” In 1869 Darwin himself stated, "In the literal sense of the word, no doubt, natural selection is a false term."

Another example of a science book with a misleading title
is the book One of Ten Billion Earths by astrophysicist Karel Schrijver. The book is about exoplanets, planets revolving around other stars. You would think from the title that some second Earth has been discovered. But no such thing has occurred. All that has been discovered are exoplanets, a few of which are Earth-sized. No Earth-like planets have been discovered, because life has never been discovered on another planet. If we ever discover some other Earth-sized planet with life, astronomers may be entitled to start saying that there is a scientific basis for estimating that Earth is only one of billions of Earths. Until such a thing occurs, there is no scientific basis for making any claim about another Earth existing.

A science book with a very misleading title is the book A Universe from Nothing by physicist Lawrence Krauss. It's a book about the origin of the universe, but it does not actually discuss theories of the universe appearing from nothing. Instead it discusses theories of how the Big Bang could have occurred from various physical states that are very much “something,” as they can be described by particular mathematical descriptions.

Another science book with a misleading title is Matt Ridley's book "Genome: The Autobiography of a Species in 23 Chapters." Contrary to what the title suggests, genomes do not store anything like the past history of a species.

Another science book with a misleading title is the book "Hyperspace: A Scientific Odyssey Through Parallel Universes, Time Warps, and the Tenth Dimension" by physicist Michio Kaku.  You are entitled to make whatever imaginative flight-of-fancy journeys you want to make through parallel universes, tenth dimensions, and time warps, but the moment you call such a journey "scientific" you are misleading your readers.