If Levin Is Right About Martian Microbes, They're Irrelevant

On the Scientific American web site, Gilbert Levin has an article entitled “I'm Convinced We Found Evidence of Life on Mars in the 1970s.” Levin is referring to results from the two Viking spacecraft that landed on Mars in 1976.

Levin's opinion on this matter is based on results from the Labeled Release experiment. In this experiment some chemical nutrients were added to the Mars soil. Some gases were then released by the soil. With tests on Earth, such a result occurred only with soil containing life, not sterile soil.

Consequently, a scientific consensus formed that no life had been detected on Mars. As a 1970's paper by five scientists stated, “The three biology experiments produced clear evidence of chemical reactivity in soil samples, but it is becoming increasingly clear that the reactions were nonbiological in origin.” The paper attributed the results of the Labeled Release experiment to mere oxidants in the Martian soil.

The average reader of the article will not be likely to realize why Levin is not a disinterested and impartial judge of whether the Labeled Release experiment produced evidence for life on Mars. The fact is that Levin was the principal scientist behind the Labeled Release experiment. So that experiment was kind of Levin's baby. His opinion on the accomplishments of that experiment may be no more likely to be impartial than a father's opinion on whether his daughter is pretty.

Levin makes a minimal mention of the failure to detect organic molecules in 1976, but doesn't explain the significance of that.  He should have explained that no organic molecules equals no life, and that if the reading of no organic molecules was correct, then whatever was observed by his Labeled Release experiment could not possibly have been a sign of life.  He has presented no reason for thinking that the GCMS instrument malfunctioned.  In this regard he's kind of like someone claiming that some test has revealed a sign of life in a body, even though it is known that an infrared temperature reading has revealed no sign of any heat in the body. 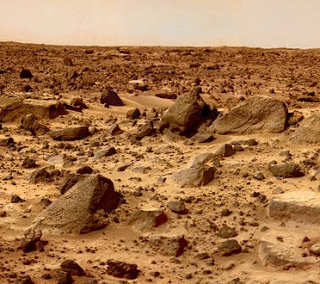 Given the conditions on Mars, it makes no sense for Levin to state in his Scientific American article that “it would take a near miracle for Mars to be sterile.” Quite the opposite would seem to be true. Levin tries to justify his strange statement “it would take a near miracle for Mars to be sterile” by suggesting that Mars and Earth have been “swapping spit” for billions of years because of comet collisions. This is hardly convincing reasoning. What are the chances of some life traveling from Earth to Mars after a comet collision? Very, very low, since an interplanetary journey in the vacuum of space would almost certainly sterilize any fragment of a comet traveling between planets. Even if some bit of life ejected by a comet collision were to travel from Earth to Mars, what is the chance that such life could then survive entry into the Martian atmosphere, which would almost certainly cause it to burn up? Very, very low.

Levin lists some findings that he calls “evidence supportive of, or consistent with, extant microbial life on Mars.” They include the following (the quotes after each bullet are Levin's words):

I may note that if Levin's claim that “ejecta containing viable microbes have likely been arriving on Mars from Earth” were true, it would pretty much kill the whole point of looking for microbial life on Mars. We have been told many times that it is very important to look for life on Mars, because it would tell us something about the likelihood of life's natural appearance. The argument has been: you can't tell much about the likelihood of life appearing from chemicals if it happened on only one planet, but you can know about that likelihood if you know that it occurred independently on two planets in the solar system. People have often spoken along these lines: “If we find life on Mars, that will show that it was relatively easy for life to naturally appear from non-life, and that therefore life must be common in the universe.”

Astronomer Martin Rees scientist put it this way (note the important use of the word "independently"):


"But the existence of even the most primitive life on Mars would in itself be hugely interesting to scientists. It would also have broader cosmic implications. If life had originated twice, independently, within our solar system, we’d have to conclude that it can’t be a rare fluke – and that the wider cosmos must teem with life, on zillions of planets orbiting other stars. But until we find life on Mars (or maybe on the moons of Jupiter or Saturn, or on a comet) it remains possible that life is very rare and special to our Earth."
But imagine if it were true that “ejecta containing viable microbes have likely been arriving on Mars from Earth.” If that were true, then the existence of microbial life on Mars would not be important, for such life would probably just be something descended from microbes that traveled from Earth, rather than something that appeared independently. In such a case it would not all be true that "life had originated twice, independently."  If Mars life came from Earth, then finding life on Mars wouldn't tell us anything new about the likelihood of life appearing by chance from non-life, and finding life on Mars would not tell us anything new about the likelihood of life independently appearing on planets revolving around other stars.  If Mars life came from Earth, then even if we found life on Mars, there would still be only one known case in which life independently appeared.
Posted by Mark Mahin at 7:24 AM