Will Robots Make Us Sissies?

Will Robots Make Us Sissies? The period between 1870 and 1910 was a great age for rugged American masculinity. It was the age of the cowboys and the conquest of the American west, when a man might spend several hours on a horse, and spend most of the day wearing a holster with a gun, a period when a hungry guy might shoot himself a rabbit for lunch.  Perhaps the most representative figure of the age was the ultra-masculine Theodore Roosevelt, a guy who would have easily won a fistfight with any American president who came after him.  But a few decades in the future, we may have a very different type of age. It may be a pampered, prissy, pinker era in which most of the more masculine activities are not done by men but by robots.

Let's look at activities that we strongly associate with masculinity. One of them is fighting. Today we lionize the American fighting man who risks his life in combat. But we are already starting to replace the manned air force with robotic drones. So instead of a manly Top Gun dropping bombs from a plane while dodging enemy gun fire, it's more and more a guy sitting in a comfy headquarters sipping a latte while he controls a drone thousands of miles away. After a few decades, most ground troops may be replaced by fighting robots.  Once that happens, joining the military may not be regarded as any more manly a career choice than, say, becoming an office manager.

Another masculine activity is driving a car. In modern times the iconic image of the rugged cowboy sitting on his horse has been replaced by the image of the modern man sitting behind the wheel of his car, preferably a slick shiny  convertible which growls like a tiger when you are revving the engine. In the movies the masculine guy is always behind the wheel, and his less masculine friend is always sitting in the back seat.  But in the future none of us may be the drivers. Google and other companies are working on self-driving cars. Once they are introduced they may soon become a universal standard. Politicians could easily ask: why are we losing 30,000 people per year in auto accidents because of fallible human drivers? There could then be a phase-out of all human-controlled vehicles, with robotic self-driving cars replacing them.  By 2070 the masculine guy behind the wheel may be a thing of the past.

Another masculine activity is manual labor. It looks manly when you dig a ditch, shovel snow or move a big heavy object. But after a few decades all such work may become the job of robots. We can imagine a conversation of the year 2075:

Joe: I'll move this big heavy thing myself.
Dave: You're not actually going to lift that thing, are you? Be sensible, and ask our robot to do it.

Another masculine thing is risk taking that puts a person in danger. Nothing seems more masculine than an astronaut who blasts off into space on a risky space mission,  a rock-climber who scales a cliff, or a motorcyclist who makes a daring jump. But such activities may become rare in the future because of an expansion of the human lifespan caused by the smallest type of robots: nanobots.

Technological visionaries such as Ray Kurzweil predict that in the future doctors will be able to inject us with microscopic robots called nanobots that travel through our body, repairing our cell damage, rejuvenating our cells, and cleaning out our cell wastes. The result will be much longer lifespans.

Today a person who puts himself in danger may reason: at worst I'll only lose a few crummy decades of life. But imagine if nanobots extend our potential lifespans to many centuries. Then each time a person considers doing a risky thing, he may say to himself: this may cost me centuries of life. The result may be a great decline in any type of manly, macho risk-taking such as mountain climbing, parachute jumping, deep sea diving, and risky space pioneering.

In short, robots may lead mankind to a prissy, pampered, pinker era. 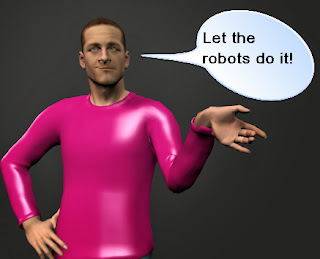 Man of the Future?