Linda Tyler always hated Halloween, because she had suffered from a fear of ghosts since the time she was a little girl.

It had started in her childhood. While lying in her dark bed at night, she was often kept awake by a strange knocking sound on the roof above her. The knocking was merely caused by a tree branch being moved around by the wind, but Linda didn't know this. She imagined that there was some ghost who lived on top of the roof, a ghost who knocked on the roof as a harbinger of doom before coming in to destroy little girls like her.

Tonight was Halloween night, so Linda had ready a bag of candy to dole out to trick or treaters who knocked on her door. When she heard the first knock, she opened the door and saw two little children, one dressed as a witch and the other dressed as a ghost.

Linda grimaced, tossed the kids some candy, and quickly shut the door. Even the sight of a little kid in a ghost costume was enough to distress Linda, and remind her of her scared days as a young girl lying in her dark bed while the strange knocking occurred above her.

Linda decided to watch some television. As it was Halloween, the channels were full of horror movies, but Linda couldn't stand to watch such fare. She settled on a nice romantic comedy.

After watching it for almost two hours, she suddenly saw something strange on her TV screen. It was a ghostly, eerie face, with its eyes and mouth open in a horrifying expression. 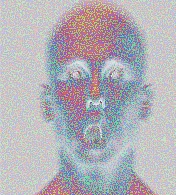 The face spoke some words in an eerie, creepy voice. The voice said, “We are here,” but the words were dragged out in a deep, spooky, slow-motion:

Linda turned off the television. Some cable programmer's idea of a Halloween joke, she thought. I'm gonna give those clowns an earful.

Linda went to her laptop computer, and decided to check her email. She saw there were ten email messages for her, each with a Subject of “We are here.” She opened up one of the messages, and saw the message had a photo attachment showing the same ghostly, eerie face she had seen on the television. The body of each email message repeated the same sentence ten times: we are here.

Linda felt a pang of dread building up inside her mind. She decided to call her boyfriend. She picked up her smartphone, and tried to begin dialing.

But then she saw a face appear on her smartphone screen. It was the same ghostly, eerie face she had seen before on her television. The face was saying the same words, in the same deep, spooky, slow-motion voice:

Linda turned off the smartphone.

Linda's boyfriend lived seven blocks away, and she wanted to go to him for comfort. But it was night, and she was too terrified to go outside in her current state of fear. So she jumped in her bed, pulled the covers over her head, and tried hard to get to sleep.

The next morning, she woke up and went to her boyfriend to tell him about what had happened.

“There was a ghost in my apartment!” Linda explained. “On my television. On all the channels. In my emails. And even in my smartphone.”

“The same thing happened to everyone all over the world,” explained Tim, Linda's boyfriend. “But that eerie face is not a ghost. It's an alien.”

“Yesterday astronomers detected that a giant extraterrestrial spaceship had entered the solar system,” explained Tim. “They came from the stars; they are visitors from another solar system. They started contacting us yesterday, on all of our media. Radio, television, email, even smartphone operating systems. So far they have only one message: we are here.”

“I was so afraid,” said Linda. “I guess there's nothing to worry about now.”

“Sure,” said Tim. “Instead of worrying that some ghost will say 'Boo,' all we have to worry about is that some creepy alien beings will now conquer us or enslave us.”
Posted by Mark Mahin at 7:47 AM