They Claim to Understand Our Origins, But Don't Even Understand Cell Division

In the technology world, they are pretty good at following the principle of “don't try to run until you've learned how to walk.” But in the world of theoretical biology, scientists are very bad at following this simple rule of common sense. Again and again, our theoretical biologists do something that is like someone trying to run before he has learned how to walk. For our biology theorists attempt to answer the most difficult problems in biology (and even tell us that they have succeeded in such attempts) before they have answered some of the most simple problems in biology.

One of the most simple problems in biology is the problem of protein folding. Protein molecules have complex three-dimensional shapes. But the genes that make up DNA show no signs of specifying such shapes. A gene merely specifies a linear sequence of amino acids that make up a string-like chain of amino acids called a polypeptide chain. But such chains somehow fold into complex three-dimensional shapes, shapes that are necessary for the proper function of proteins. Why does that occur? Nobody knows.

It is sometimes claimed that the three-dimensional shape of a protein is somehow a consequence of its one-dimensional sequence of amino acids (the amino acids that make up the polypeptide chain). But there is no good evidence that this is true. If such a thing were true, it should be easy for scientists to predict the three-dimensional shape of a protein from its amino acid sequence specified in a gene. But for decades scientists have been failing at ab initio attempts to predict the shapes of complex proteins from the amino acid sequences specified in the gene that corresponds to the protein.

Long story short, we simply do not have the answer to the very simple and basic question of how proteins are able to successfully fold into the three-dimensional shapes needed for them to be functional. This is one the most low-level and basic and small-scale questions in biology, and we haven't even answered it yet.

There is another very low-level and basic and small-scale question in biology: why do cells reproduce? Why does a cell split into two to become two cells? Our biologists don't even understand this.

On a web page entitled "The Mystery of Cell Division," a scientist confesses that scientists don't understand how cells -- with a complexity of "airplanes" -- could self-reproduce.

"Scientists have been trying to understand how cells are built since the 1800s. This does not surprise us and, as scientists ourselves, we have always been puzzled at how cells, such complex structures, are able to reproduce over and over again. Even more astonishing is that, despite the frequency of cell division, mistakes are relatively rare and almost always corrected. According to Professor David Morgan from University of California, the complexity that we observe in cells can be compared to that of airplanes."

Scientists do not understand such a thing. They have identified particular stages in the most common type of cell reproduction (called mitosis): stages such as prophase, metaphase, anaphase and telophase. But without referring to higher-level “grand purpose” reasons, scientists do not understand why (on the individual cell level) a cell would pass through such phases and reproduce. A university press release confesses, "there are many remaining mysteries about how cells perform this remarkable feat." The answer is not at all "the cells follow the instructions in DNA." DNA does not contain any instructions for making cells or any specification or blueprint of a cell.

An M. Pitkanen (who has a PhD in theoretical physics) has written the following about cell division:

"Replication is one of the deepest mysteries of biology. It is really something totally counterintuitive if cell is seen as a sack of water plus some chemicals. We have a lot [of] facts about what happens in the replication at DNA level but how this miracle happens is a mystery. At cell level the situation gets even more complex."

A university press release discusses scientific ignorance about the basis question of cell division. It states the following:

"When a rapidly-growing cell divides into two smaller cells, what triggers the split? Is it the size the growing cell eventually reaches? Or is the real trigger the time period over which the cell keeps growing ever larger?...'How cells control their size and maintain stable size distributions is one of the most fundamental, unsolved problems in biology,' said Suckjoon Jun, an assistant professor of physics and molecular biology at UC San Diego...'Even for the bacterium E. coli, arguably the most extensively studied organism to date, no one has been able to answer this question.' ”

The press release claims that some study has "shed light" on this mystery, but the study mentioned doesn't sound very impressive, merely being something that mathematically analyzed cell growth, and claimed to have found a "principle of cell-size control," without discussing a cause for such a thing.

It would be easy to understand cell reproduction if cells were very simple. Imagine if a cells were just uncomplicated little blobs kind of like little bubbles. Then a cell might be able to reproduce easily enough by a simple collision. When one cell collided with another, it might cause a large cell to break up two smaller cells. But what goes on in cell reproduction is gigantically more complicated than that.

Cells are so complicated that they are sometimes compared to cities, and the organelles in cells (such as the mitochondria, ribosomes and Golgi apparatus) are sometimes compared to buildings in a city. You will vastly underestimate the complexity of a eukaryotic cell (the type of cells in the human body) if you look at one of those cell diagrams that shows only a few organelles in the cell. In some cells there are millions of ribosomes, and thousands of mitochondria. So when a cell reproduces, it's like some complicated machine made an exact copy of itself. Using Morgan's statement that cells are as complex as airplanes, this is as much a wonder as if some airplane were able to make an exact copy of itself. 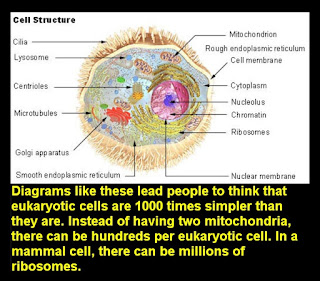 Consider just one small aspect of cell division, an aspect discussed by a university press release : the "century-old mystery" of how cells "package long, tangled strands of chromosomes into tightly compact structures before cell division."  The press release has a kind of "mystery finally solved" sound to it, but this is just yet another example of the runaway tendency nowadays for university press releases to claim explanatory achievements that haven't actually been made (something we can see in literally thousands of other university press releases).  The scientific work being heralded merely discusses some speculations about some extremely complex structure that might be used during such a process, a structure consisting of a "helical arrangement of loops." We see a visualization of this very complicated intricate structure supposedly used to achieve only a small fraction of the huge job of cell division.  But nothing is mentioned about what could cause a structure so intricate and fine-tuned to arise so quickly during cell division that only takes about two hours.  Similarly, almost all press releases in the past twenty years claiming some progress in understanding cell division are mainly hype and exaggeration, the vast majority discussing work dealing with only a tiny fragment of the overall mystery of how cells reproduce.