Near-Death Experiences Suggest the “Brain as Mainly a Valve” Idea

A near-death experience is when someone reports astonishing and mysterious hard-to-explain events occurring at a moment of physical danger, typically one in which he or she came close to death. A recent study on near-death experiences indicates that such experiences occur to a significant fraction of the population. The study by Kondziella, Dreier and Olsen used an online “crowdsourcing” platform called Prolific Academy. People from all over the world register with this online site, and are paid small sums to participate in research studies. Using the platform, Kondziella, Dreier and Olsen were able to question 1034 random subjects from 35 countries.

This is an astonishingly high number when we consider that the great majority of people never have any close brushes with death. A reasonable guess about what percentage of people have had a close brush with death would be something like 10% or 15%. So if you get 10% of about 1000 subjects reporting a full-blown near-death experience, that may suggest that most people who have close brushes with death have a full-blown near-death experience.

Making a questionable use of the word “symptoms,” the authors report the following: “The most often reported symptoms were abnormal time perception (faster or slower than normal; reported by 252 participants; 87%); exceptional speed of thoughts (n=189; 65%); exceptional vivid senses (n=182; 63%); and feeling separated from one’s body, including out-of-body experiences (n =152; 53%).” These are extraordinarily high numbers, involving about 20% of the random sample of 1034 subjects. These numbers suggest that the actual level of near-death experiences may be as high as about 20% of the population. There seems to be no obvious reason why we should not say that anyone who reports either “exceptional speed of thoughts” or “exceptional vivid senses” or “feeling separated from one's body” (during a health emergency or close brush with death) as a person who has had a near-death experience.

We should ponder the extraordinary significance of such numbers. Our neuroscientists dogmatically maintain that the brain is the sole source of our thoughts and mind. Yet judging from the numbers above, a full 15% of the population have had experiences in which their mind was separated from their body. Such a result is entirely incompatible with the “brain makes your mind” dogma, and strongly suggest that your mind and consciousness do not at all come from your brain, and can exist apart from your brain. When we get into the specific accounts given by near-death experiences, we often find those who have such experiences claim to have observed their bodies from above their bodies, just as if their soul was floating above their bodies. Why do our neuroscientists ignore such massively occurring observational reports, which argue so strongly that the dogmas neuroscientists are teaching are dead wrong?

An interesting idea is that your mind is something that comes from some external metaphysical reality beyond the human body, and that far from being the source of your mind, the brain is mainly a kind of valve that restricts your mind. It may be that each of us has a mind that is something far beyond what we experience in day-to-day living, and that the only reason we seem to have minds so limited is that our brains limit our minds. We can imagine a reason why there might need to be such a valve effect or limiting effect. So we can concentrate on all the measly little challenges of day-to-living (such as staying warm, getting enough food, and avoiding various types of physical harm), it might be necessary for consciousness to be reduced and restricted, so that we can focus our thoughts on the crummy little details of the here and now, rather than being absorbed in the grand thoughts of a philosopher. 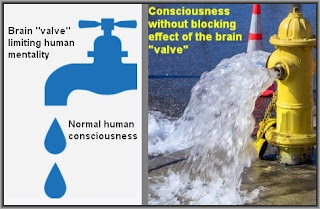 A possible relation of the brain and mind

Under such a theory, what would we expect if a mind or soul somehow moves temporarily beyond the body, such as in the out-of-body experiences often reported during near-death experiences? We might expect that the mind or thinking might be enhanced, for in such a case the “valve” effect of the brain might no longer be limiting our minds. It is just such a thing that is often reported during near-death experiences. The study by Kondziella, Dreier and Olsen found that 65% of 252 people reporting near-death experiences reported “exceptional speed of thoughts.” There is no way to account for such a thing under a “brain makes the mind” theory. But if the brain is like a valve that restricts and limits the human mind, we might expect that people might report much faster thinking when their brains shut down because of a close brush with death.

What we know about the brain is consistent with the idea of a brain mainly being a kind of valve. No one has ever discovered any effect by which neurons can produce a thought or an idea or an understanding of something, and no one has any coherent explanation of how such things can be produced by neurons. But we do know of a variety of signal-slowing factors in the brain (things such as synaptic delay, neural noise, synaptic fatigue and what is called tortuosity) which should have a very strong cumulative signal slowing effect.

The study by Kondziella, Dreier and Olsen was trying to establish some kind of association between near-death experiences and  something called “REM intrusion,” but it failed to convincingly find any causal link between the two. “REM intrusion” is a kind of “dream a bit while you're awake” effect that people can experience either when they're on the verge of falling asleep, or have just woken up but are sleepy. The study asked five questions designed to search for signs of “REM intrusion” in people. The questions were worded in such as to get the maximum number of people who could be claimed as people who experienced “REM intrusion.” People were asked “have you ever” questions such as “Just before falling asleep or just after awakening, have you ever seen things, objects or people that others cannot see?” or “Just before falling asleep or just after awakening, have you ever heard sounds, music or voices that other people cannot hear?” Asking such “have you ever” questions is not a reliable way to judge whether people experience “REM intrusion” to a significant degree, just as asking, “Have you ever felt an unexplained pain in your stomach?” is not a reliable to test for whether people have a stomach disease. A sound way to judge the degree of “REM intrusion” experienced by people would be to have a question like the following:

Just before falling asleep or just after awakening, how often have you seen things, objects or people that others cannot see?

A second crowdsourced study was done by Kondziella, Dreier, Lemale and Olsen, using the same online survey platform of Prolific Academy, but using a different group of subjects. The results were almost the same as in the first survey. The differences are shown below:

The important takeaways from these two studies are:
So what we have is a massive empirical reality that is very much inconsistent with prevailing dogmas about the brain and mind, that the brain is the source of the mind. But such an empirical reality is consistent with the idea that your mind is not the product of your brain or body, and that your brain is like a valve that serves mainly to limit your mind, rather than something that gives rise to your mind.