The study collected brain scans of 324 people, and also tested those people for their intelligence and general knowledge. This is a good sample size, so I won't be able to make the complaint that I frequently make about neuroscience studies: the complaint that the sample size was so small there was a high chance of a false alarm.

The scientists attempted to derive scores for several brain parameters, including the following:

There is no generally accepted algorithm for computing the last two of these things, so the numbers that were calculated were somewhat arbitrary.

Below are the correlation coefficients (r) that the study found:

The scientists made eight different comparison trying to find a correlation between some general brain parameter on the one hand and either intelligence or knowledge on the other hand. All of these comparisons found only correlations less than .2, all of which are negligible according to the rule of thumb cited below.

Here is another example, showing a correlation of only .20: 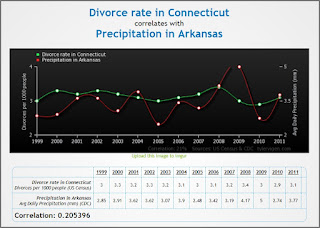 The very tiny effects found in the study can easily be explained solely by differences in perceptual speed and manual dexterity of test-takers, differences having nothing to do with intelligence, knowledge or memory. Any paper-and-pencil written test of intelligence or general knowledge is at least 5%  a test of perceptual speed and manual dexterity, which crucially affects the scores on written tests.

There are some problems with the ""Neural Architecture of General Knowledge" scientific paper that anyone attempting a replication should try to avoid:
(1) The study paper makes no mention at all of any blinding protocol, meaning that the scientists analyzing brain parameters might have known about the intelligence scores and knowledge scores corresponding to the brains they were analyzing.  Those who made such an analysis should have had no knowledge of such intelligence scores and knowledge scores, to avoid analysis bias (the meager effects reported might have been entirely due to such a lack of a blinding protocol).
(2)  The authors should have done a pre-registered study in which they committed themselves (before data collection) to exact algorithms of measuring brain connectivity, white matter volume and grey matter volume (rather than having the freedom to adjust such methods until a slight correlation was obtained).
(3) The test subjects should have been tested for perceptual speed and manual dexterity, with the intelligence scores and knowledge scores adjusted to account for perceptual speed differences and manual dexterity differences that can affect paper-and-pencil test scores (something which may be the sole cause of the very slight effects reported).
Posted by Mark Mahin at 7:24 AM