The book “Lamarck's Revenge” by paleontologist Peter Ward is a book that tries to kind of tell us: evolution theory is broken, but there's a fix. Unfortunately, the fix described is no real fix at all, being hardly better than a tiny little band-aid.

On page 43 the author tells us the following:

“ 'Nature makes no leap,' meaning that evolution took place slowly and gradually. This was Darwin's core belief. And yet that is not how the fossil record works. The fossil record shows more 'leaps' than not in species.”

On page 44 the author states the following:

“Charles Darwin, in edition after edition of his great masterpiece, railed against the fossil record. The problem was not his theory but the fossil record itself. Because of this, paleontology became an ever-greater embarrassment to the Keepers of Evolutionary Theory. By the 1940s and '50s this embarrassment only heightened. Yet data are data; it is the interpretation that changed. By the mid-twentieth century, the problem posed by fossils was so acute it could no longer be ignored: The fossil record, even with a century of collecting after Darwin, still did not support Darwinian views of how evolution took place. The greatest twentieth century paleontologist, George Gaylord Simpson, in midcentury had to admit to a reality of the fossil record: 'It remains true, as every paleontologist knows, that most new species, genera, and families, and that nearly all new categories above the level of families, appear in the record suddenly, and are not led up to by known, gradual, completely continuous transitional sequences.' "

So apparently the fossil record does not strongly support the claims of Darwin fans that new life forms appear mainly through slow, gradual evolution.  Why have we not been told this important truth more often, and why have our authorities so often tried to insinuate that the opposite was true? An example is that during the Ordovician period, the number of marine animals in one classification category (Family, the category above Genus) tripled, increasing by 300% (according to this scientific paper). But such an "information explosion" is dwarfed by the organization bonanza that occurred during the Cambrian Explosion, in which almost all animal phyla appeared rather suddenly -- what we may call a gigantic complexity windfall.

Ward proposes a fix for the shortcomings of Darwinism – kind of a moldy old fix. He proposes that we go back and resurrect some of the ideas of the biologist Jean-Baptiste Lamarck, who died in 1829. Ward's zeal on this matter is immoderate, for on page 111 he refers to a critic of Darwinism and states, “The Deity he worships should be Lamarck, not God.” Many have accused evolutionary biologists of kind of putting Darwin on some pedestal of adulation, but here we seem to have this type of worshipful attitude directed towards a predecessor of Darwin.

Lamarck's most famous idea was that acquired characteristics can be inherited. He stated, "All that has been acquired, traced, or changed, in the physiology of individuals, during their life, is conserved...and transmitted to new individuals who are related to those who have undergone those changes." For more than a century, biologists told us that the biological theories of Lamarck are bunk. If the ideas of Lamarck are resurrected by biologists, this may show that biologists are very inconsistent thinkers who applaud in one decade what they condemned the previous decade.

Ward's attempt to patch up holes in Darwinism is based on epigenetics, which may offer some hope for a little bit of inheritance of acquired characteristics. In Chapter VII he discusses the huge problem of explaining the Cambrian Explosion, which he tells us is “when the major body plans of animals now on Earth appeared rapidly in the fossil record.” Ward promises us on page 111 that epigenetics can “explain away” the problem of the Cambrian Explosion. But he does nothing to fulfill this promise. On the same page he makes a statement that ends in absurdity:

“The...criticism is that Darwinian mechanisms, most notably natural selection combined with slow, gene-by-gene mutations, can in no way produce at the apparent speed at which the Cambrian explosion was able to produce all the basic animal body plans in tens of millions of years or less. Yet the evidence of even faster evolutionary change is all around us. For example, the ways that weeds when invading a new environment can quickly change their shapes.”

The latter half of this statement is fatuous. The mystery of the Cambrian Explosion was how so many dramatic biological innovations (such as vision, hard shells and locomotion) and how so many new animal body plans were able to appear so quickly. There is no biological innovation at all (and no real evolution) when masses of weeds change their shapes, just as there is no evolution when flocks of birds change their shapes; and weeds aren't even animals. The weeds still have the same DNA  (the same genomes) that they had before they changed their shapes. Humans have never witnessed any type of natural biological innovation a thousandth as impressive as the Cambrian Explosion.

Ward then attempts to convince us that “four different epigenetic mechanisms presumably contributed to the great increase in both the kinds of species and the kinds of morphologies that distinguished them that together produced the Cambrian explosion” (page 113). By using the phrase “presumably contributed” he indicates he has no strong causal argument. To say something “contributed” to some effect is to make no strong causal claim at all. A million things may contribute to some effect without being anything close to being an actual cause of that effect. For example, the mass of my body contributes to the overall gravitational pull that the Earth and its inhabitants exert on the moon, but it is not true that the mass of my body is even one millionth of the reason why the moon keeps orbiting the Earth. And each time you have a little charcoal barbecue outside, you are contributing to global warming, but that does not mean your activity is even a millionth of the cause of global warming. So when a scientist merely says that one thing “contributes” to something else, he is not making a strong causal claim at at all. And when a scientist says that something  “presumably contributed” to some effect, he is making a statement so featherweight and hesitant that it has no real weight.

On page 72-73 Ward has a section entitled “Summarizing Epigenetic Processes,” and that section lists three things:

There is nothing constructive or creative in such epigenetic processes. They are simply little tweaks of existing proteins or genes, or cases of turning off or erasing parts of existing functionality. So epigenetics is useless in helping to explain how some vast burst of biological information and functional innovation (such as the Cambrian Explosion) could occur.

Trying to make it sound as if the idea that epigenetics had something to do with the Cambrian Explosion, Ward actually gives away that such an idea has not at all gained acceptance, for he states this on page 118: “From there the floodgates relating to epigenetics and the Cambrian explosion opened, yet none of this has made it into the textbooks thus far.” Of course, because there's no substance to the idea that epigenetics can explain even a hundredth of the Cambrian explosion. The Cambrian Explosion involved the relatively sudden appearance of almost all animal phyla, but Ward has failed to explain how epigenetics can explain the origin of even one of those phyla (or even a single appendage or organ or protein that appeared during the Cambrian Explosion).  If the inheritance of acquired characteristics were true, it would do nothing to explain the appearance of novel biological innovations, never seen before, because the inheritance of acquired characteristics is the repetition of something some organisms already had, not the appearance of new traits, capabilities, or biological innovations.

So we have in Ward's book the strange situation of a book that mentions some big bleeding wounds in Darwinism, but then merely offers the tiniest band-aid as a fix, along with baseless boasts that sound like, “This fixes everything.”

A book like this seems like a complexity concealment.  Everywhere living things show mountainous levels of organization, information and complexity, but you would never know that from reading Ward's book.  He doesn't tell you that cells are so complex they are often compared to factories or cities. He doesn't tell you that in our bodies are more than 20,000 different types of protein molecules, each a different very complex arrangement of matter, each with the information complexity of a 50-line computer program, such proteins requiring a genome with an information complexity of 1000 books. He doesn't mention protein folding, one of the principal reasons why there is no credible explanation for the origin of proteins (the fact that functional proteins require folding, a very hard-to-achieve trick which can occur in less than .00000000000000000000000001 of the possible arrangements of the amino acids that make up a protein).  In the index of the book we find no entries for "complexity," "organization," "order," or "information." Judging from its index, the book has only a passing reference to proteins, something that tells you nothing about them or how complex they are.  The book doesn't even have an index entry for "cells," merely having an entry for "cellular differentiation." All that Ward tells you about the stratospheric level of order, organization and information in living things is when Ward tells you on page 97 that "there is no really simple life," and that life is "composed of a great number of atoms arranged in intricate ways," a statement so vague and nebulous that it will go in one of the reader's ears and out the other.

In his interesting recent book Cosmological Koans, which has some nice flourishes of literary style, the physicist Anthony Aquirre tells us about just how complex biological life is. He states the following on page 338:

"On the physical level, biological creatures are so much more complex in a functional way than current artifacts of our technology that there's almost no comparison. The most elaborate and sophisticated human-designed machines, while quite impressive, are utter child's play compared with the workings of a cell: a cell contains on the order of 100 trillion atoms, and probably billions of quite complex molecules working with amazing precision. The most complex engineered machines -- modern jet aircraft, for example -- have several million parts. Thus, perhaps all the jetliners in the world (without people in them, of course) could compete in functional complexity with a lowly bacterium." 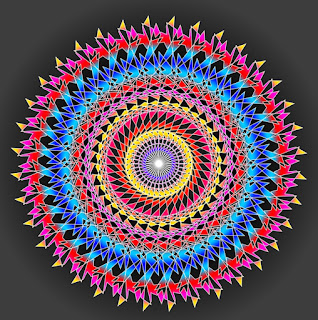 Some arrangements are too complex to have appeared by chance
Posted by Mark Mahin at 7:31 AM