Neurons and Synapses Are Too Noisy to Explain Precisely Accurate Recall

The table below summarizes this conflict.

By following the links above, you can read detailed discussions of the claims I make in the right column – except for my claims about neurons being very noisy, which I will justify in this post.

When we talk about the noise in a communication system, we can imagine this as a kind of static that prevents the transmission from occurring without errors. A young reader may not even know what static is, since nowadays digital communication occurs with very little noise. But I experienced static frequently in my youth, back in the days long before the internet. One type of static would occur when I listened to the radio. When I tuned in to a radio station too far away, the radio signal would be mixed with a crackling noise or static that might prevent me from hearing particular words or musical notes in the transmission. In my youth there was also a problem with television noise or static. On top of a TV set there would be an antenna, and if it wasn't pointing just right, a TV signal might be rather noisy. The noise might be of a visual type, with random little blips appearing on the TV screen. Sometimes the static would be so bad you couldn't see much of anything on the TV you recognized.

The table below illustrates an example of noise in a signal transmission system.

In a very recent interview, an expert on neuron noise states the following:

There is, for example, unreliable synaptic transmission. This is something that an engineer would not normally build into a system. When one neuron is active, and a signal runs down the axon, that signal is not guaranteed to actually reach the next neuron. It makes it across the synapse with a probability like one half, or even less. This introduces a lot of noise into the system.

So according to this expert, synapses (the supposed storage place of human memories) transmit signals with a probability of less than 50 percent. Now that's very heavy noise – the kind of noise you would have if half of the characters in your text messages got scrambled by your cell phone carrier.  A scientific paper tells us the same thing. It states, "Several recent studies have documented the unreliability of central nervous system synapses: typically, a postsynaptic response is produced less than half of the time when a presynaptic nerve impulse arrives at a synapse."

Another scientific paper tells us, “Neuronal variability (both in and across trials) can exhibit statistical characteristics (such as the mean and variance) that match those of random processes.” Another scientific paper tells us that “Neural activity in the mammalian brain is notoriously variable/noisy over time.” A paper tells us that there are two problems in synaptic transmission: (1) the low likelihood of a signal transmitting across a synapse, and (2) a randomness in the strength of the signal that is transmitted if such a signal transmission occurs. As the paper puts it (using more technical language than I just used):

The probability of vesicle release is known to be generally low (0.1 to 0.4) from in vitro studies in some vertebrate and invertebrate systems (Stevens, 1994). This unreliability is further compounded by the trial-to-trial variability in the amplitude of the post-synaptic response to a vesicular release.

Another paper concurs by also saying that there are two problems (unreliable synaptic transmission and a randomness in the signal strength when the transmission occurs):

On average most synapses respond to only less than half of the presynaptic spikes, and if they respond, the amplitude of the postsynaptic current varies. This high degree of unreliability has been puzzling as it impairs information transmission.

This is a problem for all claims that memories are retrieved from brains, because humans are known to be able to remember things very accurately, but “neural noise limits the fidelity of representations in the brain,” as a scientific paper tells us.

Yes, neurons and synapses are pretty slow and noisy, but that's why human memory is slow and unreliable. Think of how it works when you suddenly see some old schoolmate that you haven't seen in twenty years. It may be a while before you remember their name. And when you remember something about that person, your memory will probably be not terribly accurate. So you have a kind of a slow “noisy” memory.

But it is easy to come up with examples of human memory performing without error in a noiseless manner. I just closed my eyes and recited the following lines without any error at a rate faster than you can read these lines aloud:

I am the very model of a modern Major-General
I've information vegetable, animal, and mineral
I know the kings of England, and I quote the fights historical
From Marathon to Waterloo, in order categorical

I'm very well acquainted, too, with matters mathematical
I understand equations, both the simple and quadratical
About binomial theorem I'm teeming with a lot o' news
With many cheerful facts about the square of the hypotenuse

A rock singer at a funky free-wheeling concert might get away with an error rate of 2% in his memory recall of words, but opera fans are very intolerant of errors. When Wagner fans (who have typically heard an opera many times on recordings) go to something like the Bayreuth festival, they expect singers to recall Wagner's notes and words with 100% fidelity, and that is what they usually get, even when hearing roles such as Tristan and Siegfried which require a singer to memorize hours of singing.  Every time an actor performs Hamlet, he recites 1480 lines of dialog, and many such actors recall all such lines without any errors. 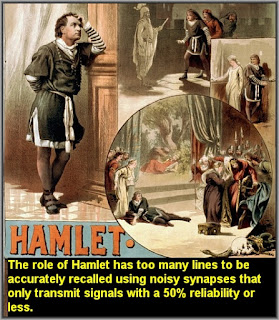 Then there is Leslie Lemke, who according to this article in wikipedia.org "can remember and play back a musical piece of any length flawlessly after hearing it once."  It is well documented that there are quite a few Muslims who can recite the entire holy book of their religion, a book of some 80,000 words. Then there are people who flawlessly remember content that is hard to remember. According to the site of the Guiness Book of World Records, Rajveer Meena memorized pi to 70,000 digits, reciting those 70,000 digits without any errors. Lu Chao memorized pi to 67,000 digits.

How could such feats occur if memory retrieval is being performed by neurons and synapses that are very noisy? They cannot be. In these cases, human memory is acting at a reliability vastly surpassing what should be possible if memory retrieval or thought is a neural phenomenon.  A scientific paper states, "Neural noise limits the fidelity of representations in the brain."  But humans such as those I have mentioned seem to be able to recall huge amounts of learned text or song without any such problem of a degradation of "fidelity of representations."

A similar conclusion is forced on us when we consider the accuracy of the most impressive human calculators. In 2004 Alexis Lemaire was able to calculate in his head the 13th root of this number:

In only 77 seconds, according to the BBC, Lemaire was able to state that it is the number 2396232838850303 which when multiplied by itself 13 times equals the number above.  Here we have calculation accuracy far beyond anything that could be possible if noisy neurons are the source of human thought.

Given the high amount of noise in neurons and synapses, which would strongly degrade the accuracy of neural memory retrieval and neural signal transmission, the facts of very accurate human calculation and very accurate human memory recall (as shown by calculation savants, Hamlet actors, and Wagnerian opera singers) are very much in conflict with the dogmas that our thinking is performed by our brains and our memories are stored in and retrieved by our brains.  This is yet another case in which the low-level facts of neuroscience defy the dogmatic claims of neuroscientists.

Think for a moment about the implications if a synapse can only transmit a signal with about a 50% reliability, as indicated by the previously quoted expert on neuron noise. This does not at all mean that people would recall things with about 50% accuracy if memories are stored in brains; it's much worse than that. Since any act of neural memory retrieval would involve innumerable different signal transmissions through innumerable neurons, we would expect the actual accuracy to be only some tiny fraction of 50% if we were using synapses to retrieve our learned knowledge.  Similarly, if you play the game "Chinese whispers" (also called "gossip") at a school lunch table, and have everyone at the table be playing noisy music in earphones as they hear the gossip story being whispered among the players, the tenth person to receive the story will be unlikely to receive even 20 percent of it accurately.

Let us imagine a planet in which the sky was perpetually covered in very thick clouds, so that no one had seen the stars or the local sun.  On such a planet there would be a great mystery: from where comes the heat that keeps life on the planet warm? If you were a rather clumsy thinker on such a planet, you might come up with some cheesy theory to explain the heat on your planet, and dogmatically cling to it -- maybe the theory that rocks on your planet warm the planet through radioactivity, or that heat shoots up from the hot core of the planet. But if you were a better thinker, you would say, "There is nothing anyone has observed that can explain this planet's heat -- it must come from some mysterious unseen reality."  It is something similar that we should say about our mental capabilities: that nothing we have observed can explain them, and that they must come mainly from some mysterious unseen reality.
Posted by Mark Mahin at 10:26 AM

Email ThisBlogThis!Share to TwitterShare to FacebookShare to Pinterest
Labels: argument against brain storage of all memories, neuroscience