Today on a NASA web page I saw one of the most brazen lies I have ever seen on a government web page. The web page has the title “NASA Study Reproduces Origins of Life on Ocean Floor.” The headline is entirely false, for the experiment did not produce any living thing. No cell was created, no DNA or RNA molecule was created, and not even a single protein was created. The actual result of the experiment was pretty much the most measly and paltry result you could imagine: the appearance of only a single type of amino acid.

The NASA experiment in question was one that tried to duplicate an imagined origin-of-life in hydrothermal vents, underwater geological structures where there was lots of warm water. The scientists created some beakers in which they tried to put water and various chemicals they think might have existed near hydothermal vents billions of years ago. I may point out that this is not a valid procedure for trying to recreate conditions that might have existed in the oceans billions of years ago. If you use a glass beaker, you can confine and concentrate chemicals in a way that would not occur in underwater hydrothermal vents. If you had done a valid procedure for trying to recreate the conditions near hydrothermal vents billions of years ago, you would dump the chemicals into a vat of at least 10,000 gallons, a vat that included some hot structures resembling hydrothermal events. The objection I make here is not at all a trifling one. It can be 1,000,000 times more likely to achieve some chemical result in a confined glass beaker than in an area of very many gallons simulating the ocean.

If some origin-of-life experiment were to produce all twenty types of amino acids used by proteins, this would do nothing to show that life can naturally arise from a lifeless ocean. Such an experiment would be like showing that a monkey typing on a keyboard can produce all 26 characters of the English alphabet. If you did that, you wouldn't do anything to show that typing monkeys can produce functional computer programs. Similarly, if an origin-of-life experiment were to show that all 20 types of amino acids used by proteins can be produced under conditions simulating the early earth, that would not at all show it is possible that life could arise from non-life under such conditions. For it would still be fantastically improbable that such amino acids would ever form into all the functional proteins needed for life. Just as you need extremely fine-tuned arrangements of keystrokes to produce working computer programs (arrangements incredibly unlikely to be produced by typing monkeys), you need extremely fine-tuned arrangements of amino acids to produce functional proteins (arrangements exceptionally unlikely to be produced by random combinations of amino acids).

For NASA to give us a headline claiming that this flop experiment was one that “reproduces origins of life” is as big a lie as claiming that you have shown a monkey can produce usable computer programs by bringing a monkey to a keyboard and having the monkey type only one type of character on the keyboard, such as only the letter G. Thanks to NASA's duplicity in this matter, today's science news sites are full of completely false headlines claiming that NASA has reproduced the origin of life.

A correct headline and story for the NASA experiment would be the one below: 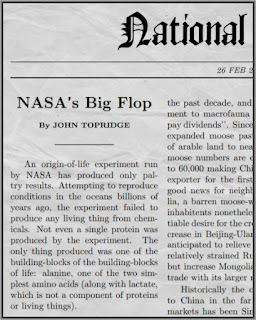 A rather good analogy for the simplest imaginable living thing is to compare it to a 300-page technical books with 100 chapters. Each chapter can be compared to a particular protein. The simplest microbe requires at least 100 types of proteins, and most proteins consist of hundreds of amino acids. The complexity of a protein is about comparable to a 3-page book chapter. A single amino acid is like a single word in such a book, with the individual atoms of the amino acid being comparable to a single character of the book's text.  The overall information complexity of the simplest possible self-reproducing microbe is comparable to the information complexity of a 300-page technical book.

Imagine if you gave your 6-month-old baby a pen and a paper, and saw him draw a short line. You could call that the letter "I," and say that your baby had made a single character, a building block of a book. Such a character is like the single type of amino acid that the NASA experiment produced. But imagine if you said, based on that one little line scrawled by your baby, that not only could your baby write a book, but that your baby actually had written a 300-page book.  That would be a falsehood as big as the "NASA Study Reproduces Origins of Life on Ocean Floor" headline on the NASA web page.  The fact that quite a few websites have parroted this nonsense is simply an example of how today's science journalism often acts like a mindless echo chamber.
Posted by Mark Mahin at 11:14 AM