National Geographic has a new series called One Strange Rock, dealing with all the things that needed to go right in order for humans to exist. This is a promising premise for a TV show, a topic that receives way too little discussion on television. But I was disappointed by a recent episode in the series, which was entitled “Genesis” and dealt with the origin of life. Below are some of the misleading statements on the show.

“That's what life needed to get started: energy.”

This statement was made by a narrator on the show. Energy may be a requirement for life to get started on a planet, but such an event requires enormously more than just energy. So citing energy as “what life needed to get started” is rather absurd, given so many other steep requirements.

“We're all made of the same dead dust that makes the planet -- it's just mixed up differently.”

This idea of life as a mere mixture was stated more than once in the show. In another place a narrator stated that “it's hard to get the ingredients right,” again implying the idea that life will appear whenever some particular mixture of ingredients appears. But even the simplest life is more than just an appropriate mixture – it's a state of organization vastly greater than in any mere mixture.

Narrator says she was excited by the “thought that energy can make lifeless stuff come alive.”

One of the show's narrators said this after mentioning origin of life experiments of the 1950's. Again, the show suggested the completely erroneous idea that mere energy can create life. The idea was further enforced by a long sequence showing a lightning rod technician climbing high up a skyscraper. Someone watching the show might have said, “Wow, I didn't know that – maybe you'll get life after just the right lightning flash.”

“If you want to make stardust into life, there's a bit more to it than just add water.”

This statement implied that it is pretty easy to make life, just a “bit more” than adding water to dust. This is rather absurd considering the mountainous requirements for the origin of life, which I'll mention near the end of this post.

The origin of all of us was fired out of a hot chimney at the bottom of an ocean.

This statement was made by a narrator after discussing the theory that life originated in hydrothermal vents. Since such a theory is purely speculative, the idea should have not been described as fact. 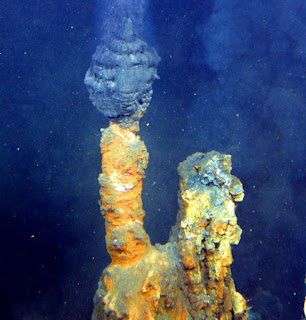 The claim the DNA has every detail of what makes you you.

The idea that DNA has every detail of what makes you you is very much erroneous. For one thing, you are largely a mental and intellectual thing consisting of your attitudes, beliefs, principles, and memories, and none of these are specified by DNA. It is also not even true that DNA specifies your body plan. The idea of DNA as a blueprint for constructing a human is unfounded, for the reasons I discuss at length in this post. DNA is best described as an ingredient list. It mainly specifies the amino acids to build particular proteins. We do not understand how the linear sequences of amino acids specified in DNA turn into the elaborate three-dimensional shapes of protein molecules (which is the mystery of protein folding), and we also do not understand how a speck-sized human egg is able to grow to became a human baby (the mystery of morphogenesis).

The claim that carbon can connect in almost infinite ways with other elements to create all the molecules for a living cell.

Strictly speaking, this statement was not inaccurate, but it was highly misleading in the sense of implying that incredibly complicated molecules such as protein molecules or DNA molecules are somehow consequences of carbon or things that we might predict from what is known about carbon. They are not any such things, but are instead things that could possibly be created out of carbon and other elements given incredibly improbable luck. Saying that carbon can connect with other elements to make the molecules needed for life is rather like saying that the scrabble squares in your Scrabble box can connect together to form meaningful instructions. In both cases this is something that will only happen given deliberate intention or incredibly unlikely luck.

A person watching the National Geographic “Genesis” TV show might have gone away with the idea the origin of life was pretty easy. That's because the show totally failed to mention the main thing it should have mentioned: that even the simplest life is a state of organization vastly greatly than that of non-life. A team of 9 scientists wrote a scientific paper entitled, “Essential genes of a minimal bacterium.” It analyzed a type of bacteria (Mycoplasma genitalium) that has “the smallest genome of any organism that can be grown in pure culture.” According to wikipedia's article, this bacteria has 525 genes consisting of 580,070 base pairs. The paper concluded that 382 of this bacteria's protein-coding genes (72 percent) are essential. So multiplying that 580,070 by 72 percent, we get a figure of about 418,000 base pairs in the genome that are essential functionality. So even the most primitive microorganism known to us seems to need a minimum of more than 400,000 base pairs in its DNA. For such a state of organization to have appeared from non-life would have required what we must call an organization explosion or an information explosion -- as would the appearance of the genetic code.

We could imagine various ways in which a TV show could have conveyed the idea of an organization explosion as big as the one needed for life to appear from non-life. For example, on a TV set we might have seen the host with one of those transparent lottery ball spinners. Then the show might have shown the host pouring into the lottery ball spinner ten or twenty types of ingredients: metal nuts, screws, nails, strips of wood, strips of wire, strips of steel, steel angle brackets, and so forth. Then we could see the TV host spinning the lottery ball spinner. We then could have been told that for life to originate from non-life, it would be like this random chamber of ingredients forming not merely into a machine, but a machine capable of making copies of itself (with each of the copies also being capable of making copies of themselves).

Then the TV viewer would have got a proper idea of how miraculous would have been the luck needed for such an origin of life from non-life – an idea completely different from the “just add water and zap a good mixture of dust” drivel suggested by National Geographic's TV show.

Postscript: A comparable show was a NOVA Wonders episode on the search for extraterrestrial life. The transcript is here. There was a long narration  that made no mention of the great complexity of even the simplest life. There was a scientist named Kevin Hand who stated this about Jupiter's moon Europa: "So, if we found amino acids in ice, that could be a pretty strong sign of life within that ocean." But it would be no such thing. Life requires not only DNA but many proteins, each of which is a very complex functional arrangement of many amino acids of different types. Finding some amino acids is no more a strong sign of life than finding some stones in the woods is a sign  there's a stone house over the hill.
Posted by Mark Mahin at 10:49 AM

Email ThisBlogThis!Share to TwitterShare to FacebookShare to Pinterest
Labels: origin of life