Any Radio Signal from the Stars Would Probably Be Permanently Controversial

For more than 60 years astronomers have been drawing a rough sketch of a great future event that will transform the world: a day when astronomers with their radio telescopes will receive a radio message from extraterrestrials on some planet revolving around a distant star. Based on the way such an event is imagined, you might think of it as some kind of revelation of great clarity in which suddenly our place on the cosmic totem pole is made crystal clear.

But it is all but certain that we will never receive any message anything like this:

Greetings, cosmic brothers! We speak to you from a distant planet 10,500 light-years away. We are members of a technical civilization 2,460,000 years more advanced than yours. Let us show you some of our dazzling accomplishments, which will probably cause your puny race to become sick with envy.

The reason we will almost certainly never receive a message like that is because it is written in English. We could get a message in English only under a very improbable scenario. It could be that there was some extraterrestrial civilization relatively close to ours – say, 25 light-years away. Such a civilization might have picked up a radio signal transmitted from Earth after 1950. From such a signal, that civilization might have figured out the rules of English; and it might then have sent a radio message back to our planet.

But this scenario is very unlikely. For one thing, radio signals from Earth would be so weakened after traveling light-years that it would be doubtful that any other civilization could pick them up. For another thing, if intelligent life in our galaxy was so common that there are civilizations only about 25 light-years away, we probably would have already received radio signals from extraterrestrials; but we have not. For another thing, it is very doubtful that anyone could figure out how to write a message in English merely from receiving some radio signals in English.

So in all likelihood if we get a radio signal from extraterrestrials, it will not be in English. There's another possibility often considered: we will get a radio message in some extraterrestrial language; then scientists will figure out how to translate that message into English, and the message will become crystal clear. But it seems most unlikely that we could ever figure out the meaning of some message written in some language that originated on another planet. Such a language might have linguistic rules and semantic complications that totally baffled us.

Another idea often discussed is that an extraterrestrial radio message would not be written in the native language of its authors, but would instead be a kind of pictogram. A pictogram can be transmitted by radio, using a system in which an instant of non-transmission represents a white pixel, and an instant of transmission represents a dark pixel. For an example of such a pictogram, we can look at the plaque that was put on the Pioneer space probe: 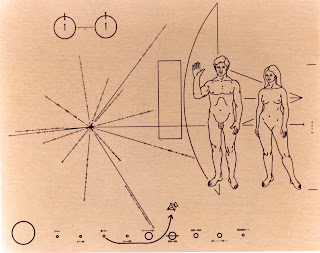 The image here attempts to transmit three main items of information: a visual showing what humans look like, a depiction of the solar system, and an indication of the position of Earth in our galaxy. The method used to depict Earth's position in the galaxy is a rather dubious one, involving listing relative distances from pulsars and the position of the Earth. There would be a large chance that anyone analyzing this message would fail to interpret this part of the message correctly. One reason is that there are more than a billion pulsars in our galaxy, so it would be hard to figure out which pulsars the message was referring to.

Let us assume that an extraterrestrial radio message would be some type of pictogram. Once the message had been received, would any of these things be crystal clear:

It seems that these things would be very much in dispute, even after such a message had been received. For one thing, there is the very general fact that a radio signal resembling a signal from extraterrestrials can very easily be faked. One way to do that would be to have a satellite or space probe transmit a radio signal that was designed to look like an extraterrestrial radio signal. The possibility of such mischief can hardly be dismissed in light of the Russian interference in the United States 2016 election.

We know that Russia spent millions of dollars in an influence campaign that often resorted to misinformation. Given that reality, there would always be the possibility that a radio signal that we thought was coming from another planet was actually coming from somewhere else in our solar system, perhaps from one of the satellites or probes of China or Russia or some other nation. There might be any number of reasons why a nation might resort to such a trick. One reason is that such a ruse might be used to create a distraction diverting public attention from some scandal involving that nation. Or if a nation were planning on launching a surprise attack or doing a military buildup, it might create illusory “radio messages from extraterrestrials” to get the world's attention focused on such a matter, and away from threatening troop movements or weapons deployments the nation was starting to make.

Another reason for doubting the source of a message claimed as coming from extraterrestrials is that such a message might crop up as a result of computer hacking. The radio telescopes scanning for extraterrestrial signals are linked up to computers and software needed to analyze the signals. Such computers and software might be subject to computer hacking. Hackers might download a fake signal fooling astronomers into thinking they had received a message from the stars. If this sounds too far-fetched, consider all the shenanigans that went on during the 2016 election, in which quite a few supposedly secure systems were broken into and tampered with.

Then there is the fact that religious theorists might interpret any unnatural radio signal as a message from a divine source, not a message from beings on some other planet. It is interesting that the first movie made about the reception of non-human radio signals was not the 1997 Jodie Foster movie Contact, about the reception of extraterrestrial radio signals. It was instead the 1950 movie The Next Voice You Hear, about humans getting radio messages from God. If some apparently non-human radio signal was received by astronomers, religious theorists would probably jump in with speculations that this message was some kind of revelation from some divine being. It would be hard to rule out such a possibility, given the difficulty of determining exactly who sent some message, particularly if such a message was some kind of abstract or baffling pictogram.

Even if the message had some type of indication of a particular location in the galaxy, this would not prove that the message had been transmitted by extraterrestrials from such a location. Religious theorists might speculate that the depicted location was a special planet, and that the message was a message about that planet – perhaps something telling us to search at that location, or a message telling us about some special blessed location that was particularly sacred or important.

There would also be theorists who might speculate that the message was coming not from extraterrestrials but from some other dimension – perhaps some kind of Other Side that is an afterlife realm. If you object that no one would ever try to link a mysterious radio signal with life after death, I may note that people have already being making such a link for decades. For decades there has been a phenomenon called Electronic Voice Phenomenon, in which people report getting mysterious electronic messages, which may be either radio signals or words that appear unaccountably while recording in a quiet place. The people getting these messages often claim that they are messages from some afterlife realm. There is an Italian researcher named Marcello Bacci who claimed to have received radio messages from some afterlife realm for many years. People supportive of these claims might claim that any new radio message of a non-human origin was another radio message from some spiritual realm.

It seems hard to imagine any way that a pictogram message could convey some of the basic facts about senders of a message, such as how much more advanced than us the sender was. Such a message might include a number listing how many years passed since the civilization had started to develop technology. But we wouldn't know what that number meant. The “year” used to state the age of the civilization would presumably be the time it took the home planet to revolve around its star, but that might be anywhere between one tenth of a year and 100 years, leaving the age of the radio-transmitting civilization very uncertain.

If the radio message was some type of pictogram, there would probably be multiple ways to interpret each of the representations in the message.  The multiple possibilities for interpretation would help lead to a long or permanent controversy.  If the message was written in an alien language, there would be endless debates over whether a particular translation was correct.

A radio message of apparently artificial origin would be comparable to a message in the clouds, in that it would be interpreted by people in different ways, according to their philosophical inclinations. For example, let us imagine that clouds were to form a message  in the sky, one stating: you are being watched, so do not act badly. Such a message would be the start of a great controversy. Theists would say that it was a message from God. The non-religious would claim that it was a message from visiting extraterrestrials, and that “do not act badly” was referring to things such as “fighting too many wars” or “creating too much global warming pollution.” Others would say the message had been produced by humans. If only one such message was received, the controversy would probably never end.

Similarly, a single radio message from a non-human source would probably be the start of an interpretation controversy which might never end, with an endless debate about whether the message was from extraterrestrials, hackers, a foreign disinformation squad, a divine being, an afterlife realm, or transmitters in another dimension or another universe.
Posted by Mark Mahin at 11:27 AM