When a Physicist Got Good Evidence for Dowsing

A recent article on medium.com is entitled In 2017, UK water companies still rely on “magic.” The article is about the practice called dowsing. Practiced for centuries, dowsing involves holding a forked branch, and trying to wait for some branch movement indicating where water is underneath the ground. The practice is dismissed by skeptics as superstition. The problem is that a scientific paper by a physicist has actually presented very good evidence that some people can perform dowsing with very good effectiveness, achieving a level of success that is currently inexplicable.

Le Page suggests that the feeling of the branch pointing one way comes from the user's mind itself. But such an explanation does nothing to debunk dowsing. It may simply be that an idea about the water's location could be originating in an anomalous way in the dowser's mind, causing his arm to move and then causing the branch to move. That still leaves standing the possibility that dowsing could stem from clairvoyance in the dowser's mind, which makes more sense than any type of “magic of the branch” type of explanation.

Le Page misleads us by telling us, “Every properly conducted scientific test of water dowsing has found it no better than chance.” That is not at all true. In fact, one of the three studies Le Page refers us to has the following statements, citing or quoting conclusions in another scientific study:

Some few dowsers, in particular tasks, showed an extraordinarily high rate of success, which can scarcely, if at all, be explained as due to chance...In every sort of test conducted, there were some few people who showed location-dependent responses, some with good and some with extraordinarily good reproducibility, which, in
their departure from chance expectations, were highly significant...A real core of dowser-phenomena can be regarded as empirically proven.

The most extensive scientific study about dowsing was one done in the 1990s, a study conveniently not mentioned by Le Page. It was a massive 10-year study involving more than 2000 drillings. The study was summarized as follows in an article by Popular Mechanics:

Researchers analyzed the successes and failures of dowsers in attempting to locate water at more than 2000 sites in arid regions of Sri Lanka, Zaire, Kenya, Namibia and Yemen over a 10-year period. To do this, researchers teamed geological experts with experienced dowsers and then set up a scientific study group to evaluate the results. Drill crews guided by dowsers didn't hit water every time, but their success rate was impressive. In Sri Lanka, for example, they drilled 691 holes and had an overall success rate of 96 percent. "In hundreds of cases the dowsers were able to predict the depth of the water source and the yield of the well to within 10 percent or 20 percent," says Hans-Dieter Betz, a physicist at the University of Munich, who headed the research group. "We carefully considered the statistics of these correlations, and they far exceeded lucky guesses," he says. What's more, virtually all of the sites in Sri Lanka were in regions where the odds of finding water by random drilling were extremely low. As for a USGS notion that dowsers get subtle clues from the landscape and geology, Betz points out that the underground sources were often more than 100 ft. deep and so narrow that misplacing the drill only a few feet would mean digging a dry hole.

The study in question, finding very strong evidence that dowsing can be effective, was vastly larger in scale and scope than two irrelevant studies Le Page cites (neither of which even dealt with dowsing to search for underground supplies of water). In his extremely detailed and lengthy paper, the physics professor Betz stated, “Now, however, extensive field studies...have shown that a few carefully selected dowsers are certainly able to detect faults, fissures and fractures with relative alacrity and surprising accuracy in areas with, say, crystalline or limestone bedrock.” A press release on the study notes the following:

An overall success rate of 96 percent was achieved in 691 drillings in Sri Lanka. Based on geological experience in that area, a success rate of 30-50 percent would be expected from conventional techniques alone. 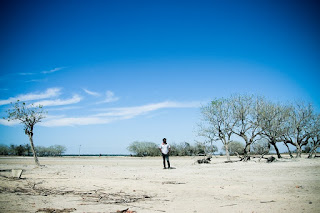 An arid area in Sri Lanka 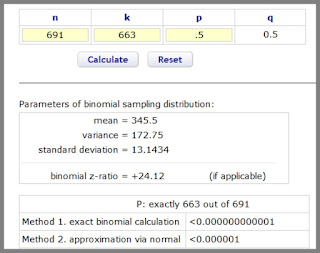 The standard deviation here is 13 sigma, vastly greatly than the 5 sigma used as a standard in physics for considering an experiment result to be a discovery. When I use my own binomial probability calculator, which I have tested successfully against benchmarks, I get a probability of 3.8926168636233847E-156, which is less than the chance of you guessing the full telephone numbers of 14 strangers on the first guess.

Le Page attempts to argue against dowsing by saying “there was even $1 million up for grabs for anyone who could provide rigorous evidence that you can find water using dowsing techniques.” That, of course, was the Randi Prize, run by arch-skeptics who would never accept previously produced evidence, but always demanded that something be quickly proven in front of them – which isn't practical with anything (such as dowsing) that could only be proven effective by a long study involving many trials and attempts. Of course, the Randi Prize was always run by people so avowedly hostile to all paranormal claims that people soon figured out it was a waste of time to participate, since it was all-but-certain that the judges would always rule that no evidence had been found, no matter what they observed.

We can ask: why would ten out of twelve United Kingdom water companies use dowsing if it had no effectiveness? What we have in the case of Le Page's article sounds like what goes on frequently in regard to massive evidence (discussed here, here, here, and here) for extrasensory perception (ESP): mainstream scientists refusing to acknowledge very strong evidence for a phenomenon, and falsely telling us there is no evidence for such a phenomenon, when there is actually very good and abundant evidence for it. The scientists who make such pronouncements are typically ignorant about the phenomenon they are telling us is impossible, and they typically show no signs of having seriously researched the relevant evidence.  Sadly we have an academic conformity culture in which it is considered politically correct to say there is no evidence for any phenomenon considered taboo, regardless of how high a mountain of evidence has accumulated.

When I look at some of the skeptic articles on dowsing, I am not impressed by the reasoning used. We are told we should think dowsing cannot be effective because Chris French and James Randi did negative studies on the topic.  These two are anti-paranormal crusaders who we can hardly expect to have produced objective studies on the topic. Moreover,  you never discredit the idea that some people can produce a paranormal effect by doing a study in which some other people do not produce that effect.  For example, if you test 100 people for ESP, and get chance results, that does nothing to discredit very impressive results produced by other people you did not test.

Dowsing is something which seems like an unthinkable possibility when we consider it in isolation. But when we consider dowsing within the context of the very many strange observations of the paranormal made by humans, the idea of dowsing does not seem so unthinkable. There is good evidence that humans have quite a few abilities beyond the understanding of physicists and evolutionary biologists. Our conclusions about such matters should be based on the actual empirical evidence, not based on a priori assumptions about whether something is possible.

Dowsing could simply be a form of clairvoyance, an anomalous ability of the human mind to perceive external physical reality in a way not involving the senses. There is abundant evidence for clairvoyance accumulated by parapsychologists such as Joseph Rhine, and more recently by the US government in tests of remote viewing. That some humans might have an ability for clairvoyance is not something that will be admitted by someone maintaining that the mind is simply a by-product of the brain. But if humans have a soul we should not at all be surprised that some humans may have psychic powers that reach beyond the body.