Journalist Annie Jacobsen has written an excellent new 500-page book entitled Phenomena: The Secret History of the U.S. Government's Investigations Into Extrasensory Perception and Psychokinesis. The book is a very fascinating look into decades of governmental involvement in paranormal phenomena.

During the Cold War, the US government's involvement in areas such as remote viewing was spurred by reports that the Soviet Union was making progress in investigating psychic phenomena. We are told on page 72 that in 1960 a Soviet scientist said this:

Today the American Navy is investigating telepathy on their atomic submarines. Soviet scientists conducted a great many successful telepathy tests over a quarter of a century ago.

On page 78 the book tells us that the Russian woman known as Nina Kulagina (born as Ninel Kulagina) was filmed apparently stopping the heart of a frog through psychokinesis. We are told, “The film caused uproar within the American defense community.” Page 79 tells us that in one test Kulagina attempted to increase the heart rate of a skeptical physician. An analyst wrote, “Abrupt changes were noted in both people [Kulagina and the skeptical physician] within one minute after the experiment began.”

Page 95 tells us that psychic Uri Geller said that the president of Egypt (Gamal Abdel Nasser) “had just died or is about to die,” at a time shortly before Nasser unexpectedly died of a heart attack. In a declassified documents obtained as part of a 2015 Freedom of Information Act, a researcher named Puharich claimed that he and another person had seen Geller “breaking a gold ring held in another person's clenched fist; concentrating on a pair of bimetal-type thermometers, and selectively making the temperature rise 6 to 7 degrees Fahrenheit on one or the other instrument; starting broken clocks and watches solely by concentration; moving the hands of a watch forward or backward without any physical contact with the watch,” and also “telepathy...with 90% accuracy in telepathy tests, where Dr. Puharich would think of a 3-digit number” (page 98).

The government funded lab tests of Geller, who did well in the clairvoyance tests reported here. Another psychic investigated by scientists using government funds was Ingo Swann. In one test with Swann, he was asked to describe a “superconducting-shielded magnetometer” he had never seen. At this time witnesses observed a strange disturbance in the output of the device, something they couldn't explain (page 134). In one impromptu test, a scientist found a small moth and placed it in a sealed box. Asked to describe what was in the box, Swann said it was something like a leaf, “except that it seems very much alive, like it's even moving” (page 136).

Under controlled laboratory conditions, Geller was able to guess the faces of unseen dice with an accuracy that had a chance probability of 1 in a million, while in another clairvoyance test he produced results with a chance probability of 1 in a trillion (page 143-144). A psychokinesis test involving Geller and some fancy scientific apparatus “indicated an apparent ability of Geller to affect the apparatus by an as yet unidentified means,” a scientist reported (page 144).

The government began to fund a program to test the feasibility of remote viewing, a process in which a person attempts by clairvoyance to obtain a physical description of a remote location. The program ended up being funded by the government for many years, because it continued to achieve impressive results. On page 161 a report is quoted on Pat Price's remote viewing of a secret location: “The names on the folders were correct...The location of the doors and the elevator, the number of floors, where the cabinets were located. The color of the cabinet was correct...It was all correct.”

Skeptics are fond of mentioning that Geller was unable to bend a spoon on the Johnny Carson show, but they neglect to discuss a later radio appearance on November 23, 1973 in which Geller asked for audience participation. Not only was Geller able to bend a spoon to the host's satisfaction, but phone calls started flooding in from the audience reporting things such as bent spoons in their houses or the hands of broken watches starting. Shortly thereafter a newspaper reported these results: “Clocks and watches restarted: a total of 1,031; forks and spoons bent or broken, a total of 293; other objects bent or broken: a total of fifty one.” (See page 174-176 of Jacobsen's book for details.)

The book includes some details of successes in remote viewing. On page 213 to 216 we are told about a remote viewer named Graff was apparently able to use a psychic “map dowsing” technique to specify the coordinates where a downed plane had crashed. Former president Jimmy Carter described the incident by saying:

[She] gave some latitude and longitude figures. We focused our satellite camera on that point and the plane was there.

On page 218 to 219 we have a story of how a psychic infuriated an army general. The government had hatched a plan to hide atomic missiles in a “shell game” setup in which the missiles would move around on rail tracks between different locations, making it hard for the Russians to guess where the missile was. But in a guessing simulation in which the chance of success was 10 percent per guess, a psychic was able to guess the correct location of the simulated moving missile 80% of the time. An infuriated general ordered a halt in ESP tests.

On page 235 to 236 we are told how Joe McMoneagle used remote viewing to psychically provide details of a new type of Soviet submarine, before anyone else in the US knew about them. The book says:

Joe McMoneagle had provided seminal information on the Typhoon submarine before any other intelligence asset in the United States. Fort Meades's Detachment G now had what is known in military and intelligence circles as an “intelligence first.”

On page 245 through 246 the book tells us about psychokenesis experiments in China:

A young girl could move an object across a desk using only her mind. Another could cause a flower bud inside a sealed jar to blossom in a matter of seconds. A boy could snap tree branches from a distance of several feet. Children with EHBF were tested in psychokinesis experiments. They could “turn the hands of watches, bend metal, break matches, and cause spontaneous combustion of flammable materials at the wave of a hand,” wrote an analyst with DIA.

On page 257 to 259 we are told that during the 1980's an American aerospace engineer named Jack Houck began hosting “spoon bending parties” in which people tried to bend spends by thought alone. Supposedly more than 1000 people were able to successfully bend spoons at such parties. This document in a recently declassified CIA repository describes these parties. The document says that when there was one helper between 20 people, the success rate would be between 80% and 100%. 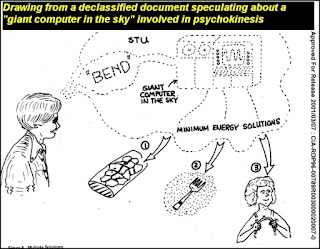 Referring to PK (mind-over-matter psychokinesis) and “warm forming,” meaning a person experiencing heat in a spoon he is trying to bend through mind-over-matter, the document states this:

In the spring of 1983, Cynthia Siegel, a graduate student at the John F. Kennedy University in Orinda, California did a survey of the first 800 people to attend Houck's PK Parties. Of the 311 people who returned her questionnaire, 72% believed that they experienced warm forming...A very high percentage of the people attending PK Parties now believed that PK really works.

Such an account should come as no surprise to anyone familiar with the table-tipping phenomenon that was very popular for quite a few years during the nineteenth century. People used to gather together and put their hands on a table, urging the table to rise. Very often heavy tables would rise in a way no one could explain. You can see amazing demonstrations of such a thing by going to youtube.com and searching for “table tipping.”

On page 263 of Jacobsen's book we are told this astonishing account:

Out of Langford's mouth came a prophecy. “A United States Pentagon official would be kidnapped by terrorists on the evening of 17 December 1981.”....Langford said he saw the terrorists breaking into the Pentagon official's apartment, binding and gagging the man, and then kidnapping him. Even more specifically, Langford saw this high-ranking official being shoved inside a trunk and secreted in the back of a van.

Sure enough, on December 17, 1981 exactly such a thing happened to Brigadier General James L. Dozier, who was kidnapped by a terrorist group called the Red Brigades. The van even had the same color mentioned by Langford.

On page 321 we are told of a remote viewing session in which Angela Dellafiora described with remarkable accuracy a randomly chosen target. On page 333 to 334 we are told how the US government apparently used Uri Geller to try to psychically influence a Soviet official so that he would support an arms control treaty, one the Soviets did agree to support. We are told on page 10 of this document (from a CIA repository) that “Dellafiora eschewed remote-viewing and instead 'channeled' her psychic data through a group of entities named 'Maurice' and 'George.'”

On page 343-345 of the book we are told of a case of a remote viewer named Paul Smith employed by the government to obtain information through clairvoyance. On May 15, 2017 he described an incident similar to what happened to the USS Stark two days later.

Government-sponsored remote viewing investigations such as the StarGate project were supposedly closed down in the 1990's, although we have no idea whether such research is continuing in secret. On page 380 of Jacobsen's book we are told the government embarked in 2014 on a multi-million dollar program to explore premonition and intuition, so that sailors and Marines can make better use of it.

As Jacobsen's mesmerizing book documents, evidence for paranormal phenomena is very strong. Skeptics use two techniques to try to sweep such evidence under the rug. The first technique is simply the technique of "total denial," in which they dishonestly state that there is "no evidence whatsoever" for such phenomena. Another technique is for skeptics to invent imaginative explanations trying to account for the facts. As Jacobsen notes on page 173, an article in New Scientist tried to account for ESP in people like Geller by suggesting that Geller was using a radio receiver implanted in his tooth. Will our skeptics next be telling us that secretly implanted bionic fingers are behind all the cases of spoon bending?

Postscript: Under the assumption that our minds are just neural activity, phenomena such as discussed here may seem like unthinkable impossibilities. But as soon as you drop that unproven assumption, such phenomena seem not so surprising. If we have souls or spirits, then all kinds of strange things may be possible. We cannot at all predict what type of powers a soul or spirit would have.
Posted by Mark Mahin at 11:00 AM