The Design Avoidance Contraption Known as the Cosmic Inflation Theory

The second problem is known as the horizon problem. This is the problem that different parts of the universe (in opposite regions of the sky) had the same temperature, even though they seem to be “causally disconnected” so that there is no way to explain their equal temperatures by assuming anything like a thermal equilibrium used to explain a uniformity of temperature in a volume of gas.

Although these issues have been called problems with the Big Bang, they are not problems at all to someone who believes that the sudden origin of the universe was a supernatural event. To such a person, the flatness problem and the horizon problem can simply be indications that the Big Bang was a carefully designed event, rather than a random natural event.

There's a phrase used in the computer software industry when a customer complains about something that was deliberately put in a computer program. The phrase is: that's not a bug, it's a feature. A theist could say exactly the same thing about the flatness problem and the horizon problem – they're not bugs in the Big Bang, but features of the universe's birth, features that were put in deliberately so that we could eventually be here in a nice, orderly, life-bearing universe. It is known that if the universe's actual density did not exactly match the critical density at the beginning, we would not have a universe suitable for life – either the universe would have expanded too rapidly for galaxies to form, or the universe would have collapsed in on itself because of gravitational contraction.

Now thinking such as that may be repellent to many scientists, so it is no surprise that some scientist would have come up with some theory designed to explain away these things that may at first seem to be evidence of a very carefully designed Big Bang. The cosmic inflation theory is such a theory. If this theory were simple, we might categorize it as a design avoidance device, since the main purpose of the cosmic inflation theory is to avoid or evade what seems to be evidence of design in the universe's birth. But since the cosmic inflation theory is very complicated, it is more descriptive for us to categorize it as a design avoidance contraption. A contraption is some very complicated thing which seems ugly because of a lack of simplicity. 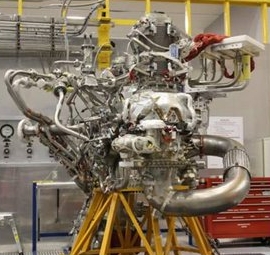 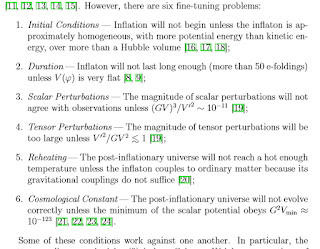 Anything with such a large set of requirements deserves to be called a contraption. This particular paper notes that “some of these conditions work against one another,” meaning that if you fine-tune one of the requirements needed for cosmic inflation to work, you will tend to mess up some other requirement needed for it to work. In fact, the paper suggests that there may be no way to get all of these requirements working simultaneously (and if that's true, the cosmic inflation theory simply is not feasible). As the paper puts it:

However distasteful all this fine tuning might seem, it has always been believed that the thing could at least be done. The purpose of this paper is to point out that this may not be true.

Now if there is a lot of fine-tuning required for the cosmic inflation theory to work, it would seem that the key question to ask is this: do we actually get a reduction in fine-tuning requirements by adopting the cosmic inflation theory? We could use this technique to try to answer that question.
What is astonishing is that I see no evidence that our cosmologists are actually making such a comparison. Perhaps they don't want to make such a comparison because it would mess up their pleasant-sounding triumphant narrative: scientists find a problem with one of their most fundamental theories, but then a brilliant scientist fixes the problem. Perhaps it is also that they want to avoid a narrative such as this: scientists find that the Big Bang was apparently fine-tuned to an astonishing degree; scientists try to explain that away with a cosmic inflation theory; scientists eventually find that theory requires more fine-tuning than the fine-tuning it removes.

We can compare this situation with that of a Manhattan resident who is concerned about the money he is spending on subway fares and cab fares. So he buys a car, believing that this is a money saver. He figures he is saving $200 a month by not paying for subway fares and cab fares. But there are many costs associated with the car. He has the monthly auto payments, and perhaps also a monthly interest cost. He also has to pay for car insurance. Then he has to pay a hefty monthly fee for a garage, because there's almost no vacant parking spots on the streets in Manhattan. Then there's also the fact that when he wants to drive from one spot to another in Manhattan, he will often have to pay $15 for parking, because of the lack of available parking spots on the street. When this person adds up all the costs of this “money saver” car, he may find that owning such a car is twice as expensive as just taking the subway and cabs.

Similarly, the total combined “fine-tuning” cost of all the fine-tuning required by the cosmic inflation theory may be more than the fine-tuning supposedly removed when such a theory is believed in. It could easily be that we are twice as unlikely to have randomly got a universe performing like the cosmic inflation theory as we would be to have got a universe that coincidentally started out with the critical density matching the actual density. Have cosmologists shown that this is not true? No, because they don't want to do that math – just as the Manhattan car buyer I just referred to wouldn't want to do the math showing his poor economic decision.