Scientists have long been bothered by why the physical conditions, laws and fundamental constants of the universe seem to be so fine-tuned to allow the existence of planets such as ours and living beings such as us. On page 235 of his book Chaos and Harmony, a University of Virginia professor of astronomy (Trinh Xuan Thuan) stated this:

"The evolution of the cosmos is determined by initial conditions (such as the initial rate of expansion and the initial mass of matter), as well as by fifteen or so numbers called physical constants (such as the speed of the light and the mass of the electron). We have by now measured these physical constants with extremely high precision, but we have failed to come up with any theory explaining why they have their particular values. One of the most surprising discoveries of modern cosmology is the realization that the initial conditions and physical constants of the universe had to be adjusted with exquisite precision if they are to allow the emergence of conscious observers. This realization is referred to as the 'anthropic principle'...Change the initial conditions and physical constants ever so slightly, and the universe would be empty and sterile; we would not be around to discuss it. The precision of this fine-tuning is nothing short of stunning. The initial rate of expansion of the universe, to take just one example, had to have been tweaked to a precision comparable to that of an archer trying to land an arrow in a 1-square-centimeter target located on the fringes of the universe, 15 billion light years away!"
One excellent book is the rather poorly titled book “Modern Physics and Ancient Faith” by Stephen M. Barr, a physics professor at the University of Delaware (which doesn't at all brush away religious thinking as an ancient relic, despite the title). In that book there is an interesting discussion of “anthropic coincidences” that are necessary for our existence. One example given is that of a parameter called v. On pages 126-127 the book makes these interesting comments:
"The long technical name of the parameter v is 'the vacuum expectation value of the Higgs field.'....The value of v is a great puzzle to particle theorists; in fact, it is one of the central puzzles of physics. What is puzzling is that in reasonably simple theories v seems to want to come out to be, not 1, but a number like 1017, i.e, 100,000,000,000,000,000...As far as the possibility of life emerging in our universe is concerned, it would be a disaster for v to be 100,000,000,000,000,000. It would also be a disaster if it were 100,000,000,000,000, or if it were 100,000,000, or if it were 100,000, or if it were 100. Indeed, it would be a disaster if it were 10, or 5, or even 1.5. It would probably be a disaster if v were even slightly different from the value it happens to have in the real world."
So nature “hit the bullseye,” a very distant bullseye, it would seem. This is only one of many astonishing “coincidences” required for our existence. Barr lists seven other such cases, one of which is even more dramatic: the fine-tuning of the cosmological constant. As Barr puts it on page 130 of his book:
"In order for life to be possible, then, it appears that the cosmological constant, whether it is positive or negative, must be extremely close to zero – in fact, it must be zero to at least 120 decimal places. This is one of the most precise fine-tunings in all of physics."
It would be very hard to overestimate how thoroughly all major objects in our universe depend upon the fundamental constants being just right. It is not merely that the existence of extremely organized things such as mammals depends on a fine-tuning of fundamental constants. It is also that the existence of objects such as stars and planets depend on such a fine-tuning.  On pages 64-65 of his book "The Symbiotic Universe," astronomer George Greenstein (a professor emeritus at Amherst College) said this about the equality of the proton and electron charges (which have precisely the same absolute value):
"Relatively small things like stones, people, and the like would fly apart if the two charges differed by as little as one part in 100 billion. Large structures like the Earth and the Sun require for their existence a yet more perfect balance of one part in a billion billion."
In fact, experiments do indicate that the charge of the proton and the electron match to eighteen decimal places. Because of the dependency of stars on a very delicate fine-tuning of fundamental constants, you can state it this way: a random universe would be both lifeless and lightless.

In an attempt to explain such things, physicist Lee Smolin has long advanced a groundless theory he calls  cosmological natural selection, one that no one seems to advance other than himself. It's a theory of a cyclical universe in which the laws of the universe change in each cycle.

In his book Time Reborn, Smolin describes the theory as follows:
"The basic hypothesis of cosmological natural selection is that universes reproduce by the creation of new universes inside black holes. Our universe is thus a descendant of another universe, born in one of its black holes, and every black hole in our universe is the seed of a new universe. This is a scenario within which we can apply the principles of natural selection."
Smolin claims to have a theory of how the physics of the universe could evolve through natural selection. But how on earth can we get anything like natural selection out of the idea of new universes being created by the formation of black holes? Smolin gave the following strained reasoning: (1) he claimed that the physics that favors a habitable universe are similar to the physics that favor the production of black holes; (2) he claimed that a new universe produced by a black hole might have slightly different physics from its parent universe; (3) he claimed that random variations in physics that would tend to produce universes that produce more black holes would cause such universes to produce more offspring (more universes); (4) he claims that as a result of this “increased reproduction rate” of some types of universes, we therefore would gradually see the evolution of physical laws and constants that tend to favor the appearance of life and also the production of black holes.
The speculations described above hinge upon the linchpin claim that a new universe can be produced from the collapse of a huge star to form a black hole. Some analysts let Smolin get away with making this claim, but there is no reason why that should be done. The idea that a new universe can be produced from the collapse of a black hole is a complete fantasy, with no basis in fact. We have no observations to support such a theory. Nor is there any physics or mathematics to support such a theory. There is no way to write an equation in which you put a new universe on the right side of an equal sign.
The idea of universes being produced from black holes is a very silly one. A typical black hole arises from the collapse of a star with only only a few solar masses. A universe like ours has a mass-energy of at least 1,000,000,000,000,000,000,000 solar masses. Claiming a new universe can arise from a black hole is like claiming a planet can arise from a grain of sand.
Smolin claimed that one advantage of his theory of cosmological natural selection is that it makes a falsifiable prediction. In a 2004 paper (page 38) he lists one such prediction:
“There is at least one example of a falsifiable theory satisfying these conditions, which is cosmological natural selection. Among the properties ...that make the theory falsifiable is that the upper mass limit of neutron stars is less than 1.6 solar masses. This and other predictions of CNS have yet to be falsified, but they could easily be by observations in progress.”
But by now this prediction has proven to be incorrect. In September 2019 a science news story reported on observations of one of the most massive neutron star ever found. We are told, “The researchers, members of the NANOGrav Physics Frontiers Center, discovered that a rapidly rotating millisecond pulsar, called J0740+6620, is the most massive neutron star ever measured, packing 2.17 times the mass of our Sun into a sphere only 30 kilometers across.” A 2021 story lists the mass of this neutron star as 2.14 solar masses.
Last week in our science news we had the headline of "Black Widow Pulsar Sets Mass Record." A Sky and Telescope story dated July 28 tells us this:
"The pulsar PSR J0952-0607, which is some 20,000 light-years away in the constellation Sextans, already holds the title of second-fastest-known rotator, spinning around its axis 707 times per second. Now, it has also shattered the record for most massive neutron star known, weighing in at 2.35 solar masses."
A CNN story last week confirms; it states, "The PSR J0952-0607 star is 2.35 times the mass of the sun." Below we see an artist's depiction of a neutron star. 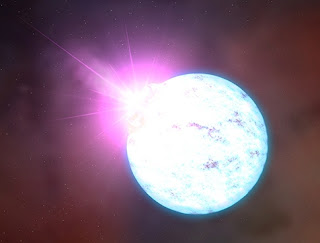 Credit: NASA Goddard Space Flight Center
So Smolin told us that the cosmological natural selection theory would be falsified if any neutron stars were found to be more massive than 1.6 solar masses, and by now it has been found that one neutron star has 2.14 solar masses and another has 2.35 solar masses. Given last week's announcement that the neutron star PSR J0952-0607 has 2.35 times the mass of the sun, we can consider the cosmological natural selection theory to be even more falsified than it previously was.
But alas, in the world of science it is sadly true that theories keep living on in the speech of scientists long after they have been falsified, kind of like the zombies of bad movies that keep walking about even after they have been killed. Some of the main theories claimed to be "scientific fact" seem to be theories of this type.
In the past week we had two other science new stories throwing cold water in the face of theorists:
(1) A news story entitled "No trace of dark matter halos" quotes a scientist saying that *the number of publications showing incompatibilities between observations and the dark matter paradigm just keeps increasing every year."
(2) Another article reports that some cosmological model trying to speculate about an eternal cyclical universe falls flat, and actually requires a beginning of the universe.
Posted by Mark Mahin at 7:07 AM

From a Scientific Committee, a Puzzling Priority Judgment

Today's scientists can be pretty bad at judging how scientific money should be spent. If you want some simple proof for this claim, I su... 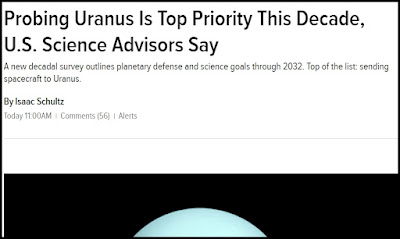