When Objects Seem to Mysteriously Appear

In the literature of the paranormal, the term "apports" refer to objects that seem to mysteriously appear at a particular location. On page 63 of his book A Theory of the Mechanism of Survival: The Fourth Dimension and Its Applications, Whatley Carrington introduces the topic:

"If we have a closed room, of which all the windows, doors, and other apertures have been carefully shut and sealed, it is clearly impossible to introduce any solid object into that room, by normal means, without breaking the seals and opening one of the apertures. The same would apply to a closed, locked and sealed box. But the literature of Psychical research abounds with instances where objects are alleged to have been introduced into such closed and sealed rooms and boxes or removed from them, which comes to the same thing without breaking the seals. This is the phenomenon of 'apport' properly so called and it forms a special case of the more general class of 'apparent penetration of matter by matter.' "

An apparent observation of an apport was recorded by Alfred Russel Wallace, one of the two fathers of the theory of evolution.  Wallace records the following event occurring in his own home, referring to a Miss Nichols as Miss N:

"The first time this occurred was at my own house, at a very early stage of her development. All present were my own friends. Miss N. had come early to tea, it being mid-winter, and she had been with us in a very warm gas-lighted room four hours before the flowers appeared. The essential fact is, that upon a bare table in a small room closed and dark (the adjoining room and passage being well lighted), a quantity of flowers appeared, which were not there when we put out the gas a few minutes before. They consisted of anemones, tulips, chrysanthemums, Chinese primroses, and several ferns. All were absolutely fresh, as if just gathered from a conservatory. They were covered with a fine cold dew. Not a petal was crumpled or broken, not the most delicate point or pinnule of the ferns was out of place. I dried and preserved the whole, and have attached to them the attestation of all present that they had no share, as far as they knew, in bringing the flowers into the room. I believed at the time, and still believe that it was absolutely impossible for Miss N. to have concealed them so long, to have kept them so perfect, and, above all, to produce them covered throughout with a most beautiful coating of dew, just like that which collects on the outside of a tumbler when filled with very cold water on a hot day."

Samuel Guppy gave this testimony of seeing something similar:

"First, the room was searched by the gentlemen while Mrs. Guppy was being undressed and re-dressed in the presence of Mrs. Trollope, every article of her dress being closely examined. We sat at the table, Mrs. Guppy firmly held, both hands, by Mr. Trollope and his wife, while Colonel Harvey and Miss Blayden held my hands and touched Mrs. Guppy's. In about ten minutes all exclaimed, ' I smell flowers,' and a shower of flowers came. On lighting the candle the whole of Mrs. Guppy's and Mr. Trollope's hands and arms were found covered with jonquil flowers. The smell was quite overpowering. The doors had been locked, the window fastened. Had a bunch of jonquils been in the room before the stance it would have been detected by the smell."

In a very interesting book he wrote, Charles Tweedale records seeing an apparent apport, a jar of ointment that seemed to appear out of thin air:

On another page of the book, Tweedale makes this remarkable claim:

"The  apparent  passage  of  objects  through  the  walls  and ceilings  has  many  times  been  observed  by  myself  and  the various  members  of  my  household.  On  two  occasions  an article  composed  of  glass  and  metal  was  observed  to  float lightly  down  from  the  ceiling  just  like  a leaf  on  a summer’s breeze."

On another page of the book Tweedale makes a similar claim:

One encyclopedia states this:

"Apport phenomena is still reliably reported. One of the most renowned modern psychics producing apports is Roberto Campagni in Italy. The Genonanese physicist Alfredo Ferraro states that he has seen thirty apports materialized by Campagni and has established beyond doubt that no trickery is involved."

On page 63 of his book A Theory of the Mechanism of Survival: The Fourth Dimension and Its Applications, Whatley Carrington explains why seemingly impossible apport phenomena may be very possible indeed as long as we assume a fourth dimension of space:

"'Rooms' and 'boxes' which would appear to be absolutely closed to a two [dimensional] space being would be perfectly open to us who live in a three [dimensional] space world. Just as every point in the interior of a two-space figure is absolutely open in the direction of the third dimension, so we must suppose from analogy that the interior of a closed three space figure a box or room is perfectly accessible from the direction of the fourth dimension. Consequently on the hypothesis that four-space actually exists as a reality, and is peopled by intelligent beings, possessed of the necessary 'apparatus' whatever that may be the explanation of the phenomenon of apport is quite simple. We have only to suppose that the object in question is moved out of the containing space, in the direction of the fourth dimension, and then put down again into three space outside the box or room in which it originally was. Or conversely, when it is a question of introducing an object into a closed space. During transit, the object would, of course, be located entirely outside of three-space."

"A favourite performance of the unseen entities was to bring objects into the room from the other apartments, or from outside altogether. One of the pleasantest of these ' apports '— as the French experimenters have appropriately named objects so strangely produced— was a lovely bunch of azaleas which were found lying on the floor covered with dew, having all the appearance of being freshly gathered. Amongst other apports brought at other times were tomatoes, tobacco, hot cinders which didn't bum anybody, and Mr. Thompson’s revolver, with cartridges for the same...The modus operandi is still for the greater part a mystery; but an inkling as to its solution is to be found associated with what is known as ' the fourth dimension.'  The essential principle is the passage of matter through matter, the truth of which has been proved to demonstration, although at a first glance it appears to be an impossibility. It is as if the apports were first reduced to something resembling a gaseous form, and in that attenuated condition passed through the solid walls or doors of the apartment in which the operators are sitting, and then are brought together again in the solid form by their inherent force of gravity, or some external force applied by unseen agency....We may conceive a process by which any article may have the speed of its atomic vibration so increased as to become invisible to mortal eyes. In that attenuated condition it is easy to suppose the limitations of three-dimensional space removed and the object passing without obstruction or difficulty through the material objects of greater density, which, on the lower plane, would block its path. Thus we should have the ' passage of matter through matter ' accounted for ; and this accomplished, the lowering of the rate of vibration would speedily restore the apported article to its normal state and to normal vision." 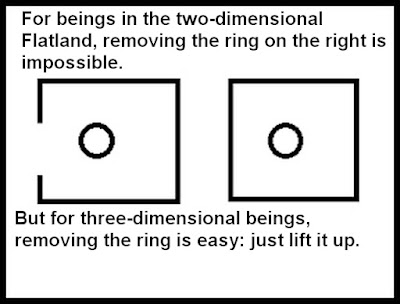 I have never watched an object as it materialized out of thin air. But (as described here) I have observed some cases that seemed to be the next best thing to such an observation. Once a pair of keys that I was never able to identify seemed to bounce off my lap and fall down a set of stairs I was sitting at the top of. At another time I was perplexed by what seemed like coins mysteriously appearing in my apartment. I decided to rigorously investigate the matter, by first making sure that every single coin in my apartment was in a container. Immediately after very carefully double-checking that there were no loose coins anywhere in my apartment, I went to pour some lemon juice into a cup of tea. I then saw a coin rolling up from behind me, the coin rolling on its edge. I was alone in the apartment when this happened. On another day (the day of a sister's death) I discovered two scrolls on my floor, with their position being utterly inexplicable. Neither of the only two people in the apartment at the time (me and my wife) had moved the scrolls from where they had been for years, buried deep inside a drawer several meters away, a drawer no one had touched that day.

I received an email announcing an event called "SSE-PA Breakthrough 2022," sponsored by the Society for Scientific Exploration and the Parapsychological Association on June 23-26, 2022. One of the presentations will be entitled "Coin-Based Apports: Advancements on Multiple Agency Anomalous Events." On the page here we read this description of a case that will be discussed, one in which continuously-running cameras apparently caught some anomalous activity:

"The case at hand develops in Mexico City, surrounding a married couple, including a man (56 years old) and a woman (45 years old) whom we will refer to as HM and LP, respectively, both unaffiliated to mediumship, and with presumably recurrent apports since 2016. The apported objects are usually well-preserved coins from Mexico and other countries, but medals, dead flowers, and even apples have been reported to appear as well....At least 61 apported coins have been documented inside their houses since the onset of the phenomena, and another 38 since the installation of the cameras. Nonetheless, fruits and withered plants have also been reported or recorded, as well as raps, whispers, scents, and orbs."

As astonishing as apport phenomena are, I do not regard them as being the most mystifying things I have ever learned about.  The wonder of morphogenesis that is the physical origin of every human is a marvel more mystifying and astonishing.  Once you very carefully study the relevant facts and realize (contrary to misleading statements commonly made) that there is no blueprint or recipe for making a human in either a DNA molecule or a speck-sized ovum, and also the fact that blueprints cannot construct complex things,  you may begin to realize that the nine-month progression from a speck-sized ovum to the supremely organized and very hierarchically structured state of an internally dynamic human body is a marvel of origination far more impressive than flowers mysteriously appearing on a table during some seance or a coin rolling up from behind you when you are alone in your home.

In the widely-read online science magazine Quanta we recently had a story claiming that some scientists have finally solved a problem that h... 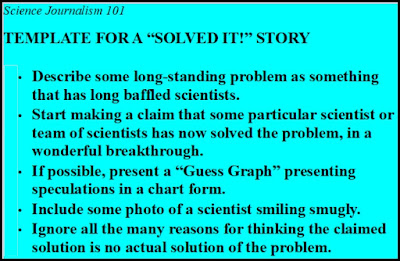