A Hailed "Breakthrough" May Be the Same Old Schlock

Behold the modern beast that is online science news reporting.  To understand it, we must understand its financial dynamics. Major websites have learned the following fundamental formula, which applies to any web page containing ads:

Page Views = Cash Income
The reason for this is that major websites make money from online ads. So the more people view a web page giving some hyped-up science story, the more money the website makes. This means that science reporting sites have a tremendous financial incentive to hype and exaggerate science stories. If they have a link saying, “Borderline results from new neuron study,” they may make only two dollars from that story. But if they have a story saying, “Astonishing breakthrough unveils the brain secret of memory,” they may make five hundred dollars from that story. With such a situation, it is no wonder that the hyping and exaggeration of scientific research is at epidemic levels.
There is a rule of thumb you can follow as a general guideline: the more ads you see on a page reporting scientific results, the more suspicious you should be that you are reading some hyped-up clickbait.  Using that rule we should be very suspicious indeed of a recent story on www.statnews.com, one with the untrue title "Using optogenetics, scientists pinpoint the location and timing of memory formation in mice."  The page devoted to giving this story has no less than four online ads.
Here is the opening of the story, ending in an unjustified claim, and describing what the author fails to see is a very defective method for testing memory in mice:
"A mouse finds itself in a box it’s seen before; inside, its white walls are bright and clean. Then, a door opens. On the other side, a dark chamber awaits. The mouse should be afraid. Stepping into the shadows means certain shock — 50 hertz to the paws, a zap the animal was unfortunate enough to have experienced just the day before. But when the door slides open this time, there is no freezing, no added caution. The mouse walks right in. ZAP. The memory of this place, of this shock, of these bad feelings had been erased overnight by a team of neuroscientists at four leading research institutions in Japan using lasers, a virus, and a fluorescent protein normally produced in the body of sea anemones. Their work, published Thursday in Science, pinpoints for the first time the precise timing and location of minute brain changes that underlie the formation and consolidation of new memories."
We read above a description of scientists using one of the silliest methods used by neuroscientists: trying to determine whether a rodent is feeling fear based on some subjective and unreliable judgment about "freezing behavior" in which an animal supposedly stops moving because it is afraid. Trying to determine fear in an animal by judging "freezing behavior" is unreliable, and makes no sense. Many times in my life I suddenly saw a house mouse that caused me or someone else to shreik, and I never once saw a mouse freeze. Instead, they seem invariably to flee rather than to freeze. So what sense does it make to assume that the degree of non-movement ("freezing") of a rodent should be interpreted as a measurement of fear?  Moreover, judgments of the degree of "freezing behavior" in mice are too subjective and unreliable.

Fear causes a sudden increase in heart rate in rodents, so measuring a rodent's heart rate is a simple and reliable way of measuring fear in a rodent.  A scientific study showed that heart rates of rodents dramatically shoot up instantly from 500 beats per minute to 700 beats per minute when the rodent is subjected to the fear-inducing stimuli of an air puff or a platform shaking. But rodent heart rate measurements seem to be never used in neuroscience rodent experiments about memory.  Why are the researchers relying on unreliable judgments of "freezing behavior" rather than a far-more-reliable measurement of heart rate, when determining whether fear is produced by recall?
The Stat News story (written by a writer with a bachelor's degree in biology and a master's degree in journalism) is a typical example of "gee whiz" science journalism in which dubious triumphal claims are uncritically parroted or amplified.  The author repeats a legend that Steve Ramirez implanted a memory in a mouse. Read here for a 2016 post I wrote debunking such a claim reported in a 2013 paper.
The Stat News story then repeats another groundless legend spread by neuroscientists, the legend that study of so-called "long-term potentiation" has shed some light on how memories are created. We read this:
"One way that scientists think that happens is through something called long-term potentiation. All the sights and sounds and smells and emotions associated with a given experience cause certain neurons to fire. And when they do, it leads to enduring changes in those cells and in cells nearby — they sprout protrusions that help transmit electrical signals and make more connections with nearby neurons." 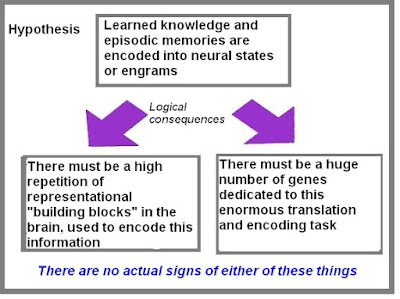 Why did the scientists make this strange claim that "episodic memory is initially encoded in the hippocampus and later transferred to other brain regions for long-term storage"?  Is it because anyone has seen a memory moving from one part of the brain to another? Not at all. No one has actually observed a memory stored in a brain, nor has anyone seen a memory moving around in the brain.
The reason why neuroscientists make such a claim is mainly that internally the hippocampus is extremely unstable.  In the hippocampus the things called dendritic spines (hypothesized to be related to memory) last for only about 30 days. Almost nowhere in the brain is there more internal instability and dendritic spine turnover.  Not wishing to claim that memories are stored permanently in this brain place of such very high instability, neuroscientists have resorted to telling the ridiculous tall tale that first memories appear in the hippocampus and then magically migrate to the cortex.  Such a tale is futile, because the cortex is almost as unstable as the hippocampus. A study found that the half-life of dendritic spines in the cortex is only 120 days. So the tall tale of memories moving from the hippocampus to the cortex is kind of a "out of the fire into the frying pan" kind of story.  Humans can reliably remember things for fifty years, so you don't solve the instability problem by imagining that memories migrate to a cortex where dendritic spines and synapses don't last for years. As for the proteins that make up such dendritic spines and synapses, they have average lifetimes of only a few weeks or less. Such numbers indicate that the brain cannot be the storage place of memories that can last for 50 years.
Posted by Mark Mahin at 8:48 AM

Why "We Are All Star Stuff" Is a Poor Slogan

Trying to make astronomy seem more relevant to the average man, the astronomer Carl Sagan tried to popularize the slogan "we are all st... 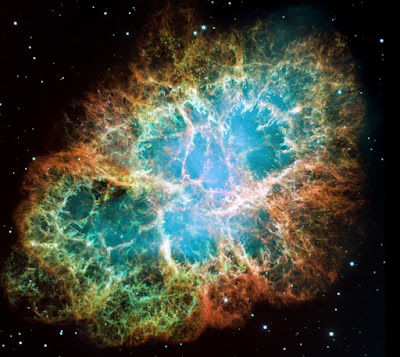