Two of the biggest dogmas of biology professors are the dogma of abiogenesis (that life can naturally appear from non-life) and the dogma of macroevolution (the idea that dramatic very complex biological transitions can naturally occur, such as one-celled organisms gradually evolving to become large visible organisms, or dinosaurs evolving into birds, or ape-like or chimp-like organisms evolving into men).  There is no direct observational or experimental evidence for either one of these dogmas.  No one has ever observed life appear from non-life. No one has ever observed the occurrence of some large very complex biological innovation or transformation that could be called macroevolution.

Origin of life researchers have not got anywhere in explaining the origin of DNA, RNA or proteins.  They have not produced any such things in any experiments realistically simulating the early Earth. Moreover, such researchers have not even produced any of the building blocks of DNA, RNA or proteins in any experiments realistically simulating the early Earth.   There has been no real experimental progress in understanding life's origin.  The problem of explaining the random origin of the 50 or more types of proteins needed for the simplest living things is a difficulty as great as explaining how someone could dump on the ground a dumpster filled with Scrabble letters and have them form into fifty coherent instruction paragraphs.

Experiments trying to produce macroevolution have all failed as miserably as the experiments trying to produce abiogenesis.  A 2016 scientific paper has the title "Experimental Macroevolution." But it's yet another case of a scientific paper with an inaccurate title. The paper discusses no real examples of macroevolution observed in experiments.  Predictably, the author tries to down-define the term macroevolution to make it apply to relatively minor things like the appearance of new types of cells or cell products such as  cnidocytes and stereom. Mere microscopic innovations are not examples of macroevolution, which refers to big things like major very complex visible structural innovations or intellectual capability innovations.

But just as the abject failure of abiogenesis experiments has been covered up with hype and deceptive descriptions, the abject failure of macroevolution experiments has been covered up with hype and misleading descriptions. We get an example of the latter in a recent news story attempting to persuade us that some progress has been made in understanding a jump from unicellular life to multicellular life. The fossil record yields no sizable record of multicellular life until about the time of the Cambrian Explosion at about 540 million years ago.  The fossil record seems to suggest that there was the most dramatic innovation of multicellular life at that time, with almost all of the animal phyla (the main divisions of living organisms) seemingly appearing in a fairly short amount of time.

Totally failing to provide any evidence for macroevolution such as the appearance of some new multicellular organism, the experimenters tried to provide some evidence for a little unimpressive microevolution. We are told that the experimenters isolated some of the cells and "cell groups" (just cell clumps), and then did a little statistical analysis.  They claim that somewhere they found that after 500 generations some of these algae cells were clumping a little more.  Unfortunately, the experimenters make no mention at all of following any blinding protocol, and they fail to use the word "blind" or "blinding" in their paper.  This means that the extremely faint evidence of microevolution that they claim to have found through clump-counting may not even be robust evidence of microevolution. Counting the number of microscopic algae clumps moving around in water is a procedure where a lack of a blinding protocol might lead researchers to see whatever little difference they want to see.

You can tell the experiment is basically a bust from a line in the press release. In the press release we read this: "They were able to demonstrate – in collaboration with a colleague from the Alfred Wegner Institute (AWI) – that the unicellular green algae Chlamydomonas reinhardtii, over only 500 generations, develops mutations that provide the first step towards multicellular life." Whenever someone claims to have merely made "the first step" towards some complex very-hard-to-achieve result, nine times out of ten they will actually have gotten basically nowhere moving towards such a result. For example, if someone claims that your vacant lot can naturally turn into a house if you just give it five years to evolve, and then a year later he shows you a little metal junk discarded on the vacant lot, and he tells you that this is "the first step" in the vacant lot evolving into a house, you should have no confidence at all in what the person is saying.  The experiment discussed in the press release has not shown us anything impressive, so we should doubt that any actual "first step" has been achieved, and we should recognize from this mere claim of a "first step" that the experiment produced nothing impressive.

The very idea of trying to insinuate that some alleged increased clumping in plant microbes does something to explain the appearance of enormously organized visible animal organisms is as ridiculous as claiming that baked beans sticking together can explain how skyscrapers or aircraft carriers get built. Clumping is not construction. Clumping does not involve any organization, and does nothing to explain the appearance of very organized things.

A recent paper attempts to persuade us that some artificial breeding experiment has given support for macroevolution. The paper incorrectly states that "many empirical studies have shown that there is a clear link between microevolutionary processes and resulting macroevolutionary patterns,"  and cites as its main example what it calls the "classic example" of "Sewall Wright's work on artificial selection in guinea pigs," saying, "Wright was able to breed laboratory populations with four toes."

Guinea pigs are normally born with three toes on their back feet, but are sometimes naturally born with four toes on their back feet (the fourth tiny toe involving no improvement in function).  This is called polydactyly. Through artificial selection using inbreeding, you can allegedgly create a breed that will always have four toes.  An animal hospital refers to such polydactyly as a "genetic defect, which may indicate other genetic health defects."  Another site says polydactyly "may require surgical repair for his [the guinea pig's] safety and comfort." Such four-toed guinea pigs are not actually an example of either macroevolution or the appearance of beneficial new features, and do not involve the appearance of any new complex useful innovation.  Sewall Wright's guinea pig experiments did nothing to provide experimental support for claims of macroevolution, and many guinea pigs with four toes on a back foot had already been observed before his experiment started. Trying to pass off an increase in four-toed guinea pigs by artificial selection as being experimental evidence for macroevolution is as misleading and laughable as trying to pass off clumping algae cells as evidence for macroevolution.

"A serious problem of the long-term Dark-fly project in this regard is that the control sister flies were accidentally lost over the course of the 60 years of maintaining the Dark-fly line (Fuse et al. 2014). Therefore, it is impossible to precisely examine the genome evolution in the Dark-fly history and to accurately compare genomes and traits between Dark-fly and its control sisters."

Neither the paper nor a press release about it mention any real robust evidence of superior night-living function in this "Dark-fly" line of fruit flies bred for 1500 generations in darkness.

A wikipedia.org article entitled "Experimental evolution" fails to give us any examples of experiments providing evidence for macroevolution, and does not even use the word "macroevolution." The experiments mentioning "selective breeding" are not actually evolution experiments, but experiments involving artificial selection. There is a mention of fruit flies that can survive better with less oxygen, but that's just microevolution, not macroevolution.

All such experiments have failed. No one has ever been able to produce eukaryotic cells from a starting point of isolated water containing only prokaryotic cells. But that hasn't stopped science news sites from misleading us into thinking that some progress was made in some experiments.

An example is the experiment discussed here. We hear about 12 years of effort, and 5 years of experimentation.  Some scientists got some primitive prokaryotic microbes through laborious mud extraction work undersea, and they then watched the microbe for years in a laboratory tube-shaped "methane-fed continuous-flow bioreactor system" (observing for "more than 2000 days" according to their paper).  They were probably hoping to see a transition from this primitive prokaryotic microbe to a far more advanced eukaryotic microbe.  But they observed no such thing.

What they were left with after this five years is (according to their preprint) "something with no visible organella-like structure."  So no transition occurred to anything like eukaryotic cells (which are rich in different types of organelles).  The main thing that the experimenters have to report is merely "morphological complexity – unique long, and often, branching protrusions."  But the abstract that uses this phrase does not state that this is a new feature that was not in the starting population of organisms. Since the microbes were bred for five years in some machine with the shape of a long tube (described here), we may suspect that these odd protrusions are effects produced by the strange unnatural environment the microbes were in.

No evidence of macroevolution has been found, and the microevolution observed is not very impressive.  But in a press article hyping this experiment, we read an evolutionary biologist saying, "This is a monumental paper that reflects a tremendous amount of work and perseverance."  That's just yet another example of a scientist describing a "sow's ear" as a "silk purse," and speaking like someone struck gold when their result was more like dross. 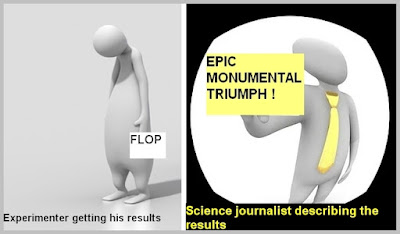 Faced with the shortfall of experimental evidence for macroevolution, a scientist may make two defenses that are merely semantic trickery. The first defense might try to redefine macroevolution, defining it so weakly that something humans have observed might be dubiously classified as macroevolution. This is kind of like redefining "moon launch" to mean "launching something near the moon as it appears in the sky," and then using that definition to justify your claim that children can produce moon launches because they can throw balls in front of the moon. The second defense might be to define macroevolution so that there is no possibility of its observation. This defense has been used by some writers, who try to define macroevolution as "evolution occurring over geological scales." With that definition, someone can say, "Why, of course we have never observed macroevolution -- it only occurs over geological time periods."
Both defenses are pretty futile, because neither stops critics from making the same complaints, using a term different from "macroevolution." For example, rather than using the term "macroevolution," a critic can instead use the term "massively innovative evolution," and complain that humans have never observed massively innovative evolution, so there is no warrant for believing it ever occurred, particularly given the impossibility of producing massively innovative evolution through mere changes in DNA molecules that do not actually specify anatomical structures but merely low-level chemical information (contrary to frequent misstatements on this topic).
Posted by Mark Mahin at 7:37 AM