Do UFOs Come From a Paraverse?

UFOs are in the news because of some upcoming government report on them, and some very hard-to-explain footage and accounts released by government sources and employees.  The mainstream media is doing what it so often senselessly does in the rare cases that it covers reports of paranormal phenomena: getting quotes from professors who show no signs of having studied the relevant phenomenon.  So, for example, a recent USA Today article quotes an astronomer dismissing UFOs as "strange reflections" or "atmospheric phenomenons."  That's just what someone might say if he had spent zero time studying UFO reports.  The same article quotes another astronomer talking about UFOs, showing zero signs that he has studied the evidence for such things.

Why is it that when mainstream sources quote professors dismising the paranormal, such sources never ask questions such as, "Please tell us how many hours you have spent studying such reports, by examining original source materials," or "Have you actually spent a sufficient time studying such evidence and accounts to have a well-informed opinion"?  It is usually the case that the professors being questioned have never bothered to seriously study the reports they are being asked about.  So asking for their opinion on such reports is like asking a philosopher about how to fix your car, or like asking a professor of medieval history to analyze an IPO investment offering.

When people think of an explanation for hard-to-explain UFO sightings, they tend to think of "nuts and bolts" spaceships from another planet.  But while there are quite a few very hard-to-explain UFO sightings, which may be signs of some utterly paranormal phenomenon, the evidence for UFOs specifically being spaceships from other solar systems seems weak.

If UFOs were physical spaceships from other planets, we might expect to observe one or more of these things:

(1) Physical evidence of intelligent life in other solar systems, such as signs of distant "technosignatures" or distant "astroengineering."

(3) Evidence of some type of spaceship entering into our solar system.

(4) Evidence of some type of spaceship entering into our atmosphere from outer space.

But the things above have not been found. It has been pointed out by many that a craft for traveling between stars would probably be much different from a craft for exploring a planet's surface or atmosphere.  But no astronomer has ever detected a "mother ship" in our solar system that looked like an interstellar spaceship. Searches for radio signals from extraterrestrial civilizations (conducted for decades) have come up empty, as have searches for optical signals from such civilizations. No sign has been found of "technosignatures" or god-like "astroengineering" in other solar systems.

Supposedly some US intelligence report on UFOs will be delivered to the US Congress next month.  We read this in an Associated Press story:

"Investigators have found no evidence the sightings are linked to aliens — but can’t deny a link either. Two officials briefed on the report due to Congress later this month say the U.S. government cannot give a definitive explanation of aerial phenomena spotted by military pilots."

The quote is consistent with my comments above. Something inexplicable seems to be involved in some UFO sightings, but there is little evidence connecting the phenomena with visiting spaceships from other planets in our universe.

Scientists sometimes imagine the existence of many other universes, none of which interact with our own universe. Such a concept is sometimes called the multiverse.  Since it imagines causally disconnected universes that do not interact with each other, the concept of a multiverse is of no explanatory value.  Those who claim that the concept can help explain the seemingly fine-tuned fundamental constants of our universe are very much mistaken.  You do not increase the likelihood of any one random trial succeeding by increasing the number of random trials. So if you imagine that there are a million billion quadrillion other universes, or an even an infinite number of other universes, that does not affect the likelihood that our universe would by chance have the conditions necessary for it to be habitable. Similarly, if you spend years buying lottery tickets, that does nothing to increase your chance of winning when buying any one of those lottery tickets. People who think the concept of a multiverse has some explanatory value tend to be people who make the simple mistake of confusing the concept of "the likelihood of some universe being habitable" with the concept of "the likelihood of our universe being habitable."

The term "paraverse" is best used in a general and non-committal way. The term does not presuppose any belief about what happens after death. The term simply means some other universe or realm of existence not normally observable by people in our universe, which can interact with our universe in some way.  When we adopt the concept of the paraverse, we throw away the never-justified dogmatic principle of "there can be no mysterious invisible or spiritual influences," and perhaps (after sufficient scholarship) acknowledge that possible signs of such influences have been extremely widely reported for centuries by a host of respectable witnesses. 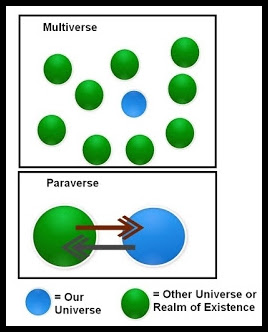 How might UFOs fit into the paraverse concept? UFOs may be manifestations of mysterious powers existing in some paraverse that can interact with our universe, powers that might either be influencing matter in our universe, or briefly visiting our universe. A paraverse power producing a UFO manifestation might be divine, angelic, psychic, spiritual or material.  Such an idea is consistent with the fact that observations of UFOs seem to usually report something that does not look technological. A UFO will be typically described as a sphere of light or a bright light or a disk or something else that does not particularly look like some "nuts and bolts" flying machine.

Rather than entering our atmosphere from outer space, UFOs may instantly enter our skies through some type of instantaneous appearance process, or through some gradual materialization process.  The history of paranormal phenomena (senselessly ignored by most of our professors) is filled with very many hard-to-explain or inexplicable cases in which inexplicable material phenomena and strange energy phenomena seemed to occur through some mysterious interaction between our reality and some eerie other reality.

When we examine the records of seances (often recorded in credible publications such as the Journal or Proceedings of the Society for Psychical Research), we can find many cases of inexplicable lights moving about indoors, and also many other phenomena far stranger.   When we examine modern photographic records of indoor photographic anomalies, we find many inexplicable things, such as 800+ photos of mysterious striped orbs, 700+ photos of mysterious speeding orbs, and thousands of photos of massively repeating orb patterns.  UFOs may have a source similar to such phenomena. They may all be cases of some mysterious unseen mind or minds reaching out to us to produce a sign of their existence. Both UFO sightings and Bigfoot sightings may be manifestations of some unfathomable intelligent influences from some mysterious paraverse.

A very rough analogy might be a man throwing a little rock into a pond.  A fish in that pond may experience that little falling rock (or its ripples) as a rare strange anomaly.  But that fish would be unable to fathom the mind that threw the stone, just as we are unable to fathom the source of manifestations from some mysterious paraverse. 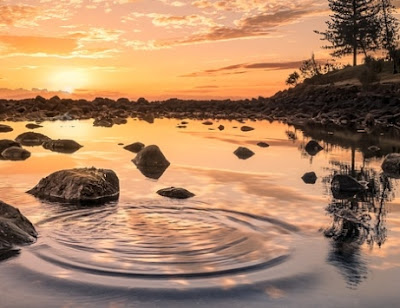 There will be some who recoil at such a comparison.  They may say something like, "I'm only interested in baffling inexplicable lights darting around in the sky, not baffling inexplicable lights darting around indoors."  The rationale behind such a distinction is not very clear, and such a statement sounds rather like saying, "I'm only interested when bears and cougars stray into my front yard, not in other weird events like when walruses or giraffes stray into my front yard."

What kind of observations might allow us to distinguish between UFOs coming from other planets in our universe and UFOs coming from some mysterious paraverse, perhaps instantly? We would not be able to distinguish between the two ideas merely by verifying something physical associated with a UFO.  That is because the idea of a paraverse does not specifically entail a purely spiritual, non-physical realm, or some realm producing only spiritual effects in our universe. A paraverse might be largely material, and manifestations from such a paraverse might consist of physical, tangible evidence.  In fact, the history of paranormal phenomena includes many reports of tangible evidence produced by some mysterious spiritual or invisible reality (examples include the widely reported phenomena  called materializations and apports).

On the other hand, you might be able to distinguish between the competing UFO explanations if a UFO encounter included some extraterrestrial claiming to have come from some specific other star in our universe, and producing evidence for such a claim, such as photos or videos of the cities on a planet revolving around such a star. Even in the case of such evidence, it would not be sufficient to rule out either the "UFOs from other planets" or "UFOs from a paraverse" explanations for other UFO sightings.  It would still be possible that some UFOs are produced by spaceships from other planets, and other UFOs arise from some mysterious paraverse, a reality capable of instantly producing physical effects in our universe.

A common boast of modern scientists is that they understand the origin of the entire human species. But I maintain that they do not actually... 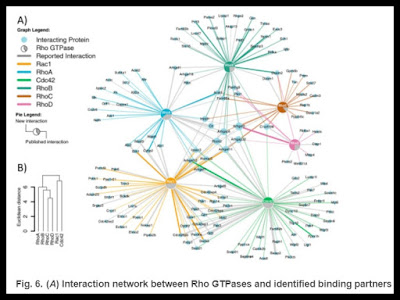