When you're a scientist trying to sell some idea, a good visual always helps.  Nowadays when there are so many good visuals around, it is hard for a science press release to get noticed when it has no visual. There is no credibility problem in providing a visual when something new has been well-observed.  For example, if some new type of geological structure has been discovered on Mars, and some rover spacecraft has taken photos of it, then such photos can be provided in some press release describing the discovery.

But what about when scientists are trying to sell us on some concept or speculation that has not been directly observed? That's when scientists or those promoting their thoughts sometimes may start resorting to shady tactics when trying to whip up visuals.

One common tactic is the artist's visualization. So if a paleontologist just has some bone fragments of some creature that lived long ago, some artist can create some artwork that imagines what the creature may have looked like.  Such artwork used to be created by painting, but now CGI computer visualizations are more common. Such artwork will be a lot more appealing than some mere photo of some bone fragments. But such visualizations are often not presented in a candid, honest manner.  Guesswork visualizations that are largely speculative are rarely described as the speculations that they are.  Similarly when paleontologists present "inheritance tree" charts of evolution, they almost always fail to identify such things as the speculations that they are.  We rarely get a visual like the one in this article, where we see side-by-side two "inheritance tree" charts of evolution that disagree with each other, letting us know how speculative such charts are.

Now that computers can create visualizations that look so much like photos, such visualizations may have the effect of fooling people into thinking some photograph was taken that was never taken. In the many articles written about the strange space object 'Oumuamua, we saw again and again a speculative CGI artist's visualization that looked like a photo of a cigar-shaped asteroid.  Some of the articles using this visualization included in very small print a line saying the visual was an "artist's visualization" or "artist's concept," but many did not. The result was that very many readers thought that 'Oumuamua had been photographed and determined to be cigar-shaped, even though the object had never been photographed as anything more than a speck, and its dimensions were unknown. A later analysis claimed that 'Oumuamua was pancake shaped.  We have here a case in which an extremely speculative guesswork visual was shaping the narrative in a way that should not have happened.

I often see stories about the speculative scientific concepts of dark matter and dark energy.  Both are believed to be invisible, and neither has been detected by scientific instruments. But when I do a Google image search for "dark matter" or "dark energy," I get many image results. How can there be so many articles about dark matter or dark energy that supply a visual that should be unavailable, given the invisible nature of these alleged things? What's going on is that time and time again, such articles are supplying photos of either regular matter seen in outer space, or some result coughed up by some computer simulation. We will often see an image looking like this: 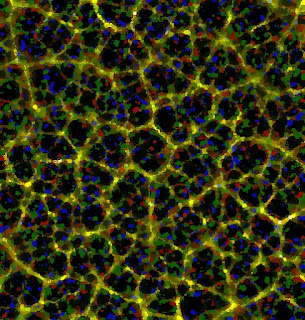 Such images should be honestly labeled, maybe like in the example below: 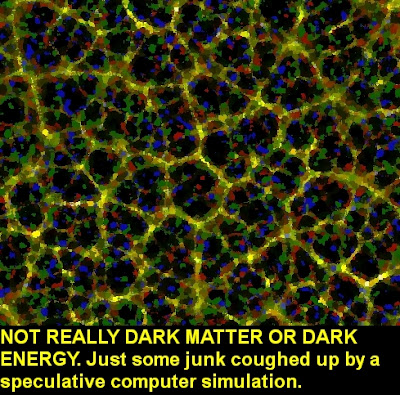 But instead of such honesty, you'll usually get something like the visual below, with a barely visible indication that what we're seeing is just the result of a computer simulation, and not something actually photographed by a telescope: 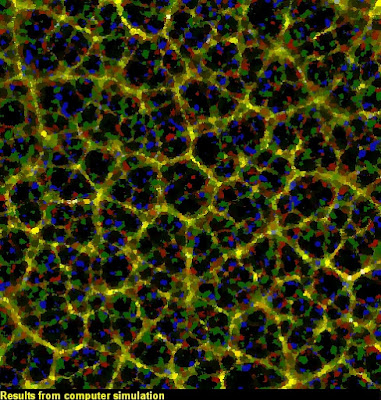 The casual reader will get the impression that dark matter or dark energy has been photographed, even though no one has observed any such things.

Then in other cases that are even more prone to raise the wrong idea in the minds of readers, there won't even be such a barely visible clue that the visual isn't an actual photograph. An example was a recent story on the LiveScience.com site. The story was entitled "These weird lumps of 'inflatons' could be the very first structures in the universe."  We saw a visual of some strange structure that looked like a planetary nebula. The caption read, "Shown here, one of the dense clumps of inflatons that emerged during the inflation phase of the Big Bang, in the infant universe."  The caption led the reader to believe he was looking at some photo of something in space.

But the photo was not a photo of anything observed in space.  It was merely a photo of some junk generated by an entirely speculative computer program. No actual "inflatons" have ever been observed, and the program was based on one of the innumerable speculative models of the unproven cosmic inflation theory.  Not only is the theory  unproven, it is also unprovable, because it speculates about things happening a fraction of a second after the universe's beginning, and scientists know of a reason why it will never be possible to get observations from before about 300,000 years after such a beginning (the density being so great that no light could transmit from before such a time).  Inflatons are as speculative as unicorns.

When things are done in such a way, 90% of the casual readers will go away with the entirely misleading impression that dark matter or dark energy or inflatons have been photographed.  This reminds me of the deceptive visuals that are so very common in the neuroscience field. We will see some brain visual that shows certain areas of the brain in bright red, raising the impression in most readers that in some area of the brain there is a much greater brain activity during some particular cognitive task. But in truth the areas in red are only very slightly more active, almost always less than 1% more active (the kind of difference one might expect to occur by mere random variations). If the brain visual were accurately done, it would show every brain area seeming to have the same color, because humans can't even recognize color differences of less than 1%.

Do a Google image search for "string theory," and you will see many images from articles about string theory. The images mostly look a little like the one below: 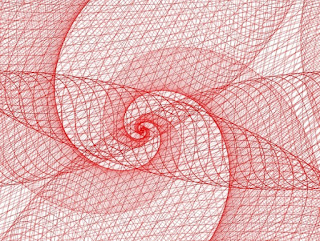 In such cases we are not seeing anything photographed in nature, and not even seeing anything arising from a speculative computer simulation. We are merely seeing artwork that is designed to give the casual reader the impression that the strings of string theory have some observational basis, an impression that is entirely false, because there is zero observational evidence for any of the claims of string theory.  That's clear from a recent interview from string theorist Michio Kaku, in which he promotes his recent book on string theory, but mentions no evidence for string theory. Trying to give some reason why we might be on the verge of a new era including string theory, all Kaku has to give is the following "not really anything" answer, mentioning a never-observed (dark matter), that has little to do with string theory:
"I think we’re on the verge of a new era. New experiments are being done to detect deviations from the Standard Model. Plus, we have the mystery of dark matter. Any of these unexplored areas could give a clue as to the theory of everything."
Elsewhere Kaku confesses, "The most glaring problem is that, for all the press extolling the beauty and complexity of this theory, we have no solid, testable evidence." String theory has been a gigantic failure that has wasted the time of physicists for decades in groundless speculations without an observational basis, but Kaku is not humbled by such a failure, and is swaggering around with  statements like this: "The destiny of science is to become like grandmasters, to solve this puzzle that we call the universe."  Sounding rather like some exemplar of overconfident hubris, he makes a very silly boast about "an equation that's maybe one inch long" that "explains the entire universe." Kaku has written a book called The God Equation which very amusingly tries to put floundering string theory theorists on some kind of god throne, painting them as grand lords of explanation who have come up with "the crowning achievement of science."  While noting how hollow are the boasts of string theorists, we should note how misleading is their use of the term "theory of everything" to describe string theory, which is nothing remotely like an actual "theory of everything," the theory saying nothing about a hundred deep mysteries of mind and biology, and also leaving countless mysteries of physics and chemistry unsolved.
Postscript: A recent scientific paper states the following about unreliable artist depictions of organisms known only from incomplete fossils:
"Given what Anderson (2011) has shown regarding the variability present in reconstructions of the same individual across separate museum displays, it is clear that very little effort has been made to produce reconstructions that are substantiated by strong empirical science. This is surprising given how museums boast about decades of success presenting scientific knowledge and education to the public...There are potential educational harms in presenting unscientific reconstructions of hominins under the shroud of presumed validity."
Posted by Mark Mahin at 8:01 AM