When an Apparition Is Seen by Not Just One

In five previous posts I discussed cases in which multiple witnesses reported seeing the same apparition. The five posts are below:

Let us look at some more cases in which multiple witnesses reported seeing the same apparition.  In the seances of Eusapia Palladino, which were witnessed by a host of distinguished observers,  there would very often appear an apparition reported by multiple witnesses. The most common occurrence were "spirit hands" reported being seen by very many observers. Palladino would ususally be under what was called "control" during such appearances, meaning that her arms and legs were held by observers determined to prevent such limbs from performing any trickery.  Such "control" was almost irrelevant when apparitions were seen, because no one has a credible theory of how someone at that time (around 1900) surrounded by close observers could have produced hard-to-explain "spirit hands" or other apparitions, even if their limbs were free.

On page 185 of  Volume 7 of the Annals of Psychical Science (1908), we read a statement by a V. Chartier who held Eusapia's right hand while an M.P. Drubay held her left hand:

"I am able to affirm, in the most formal and absolute manner, that at the moment when the phenomena of apparition of materialised hands occurred, I held Eusapia 's right hand in my left, and that I did not cease the control for a single instant . .While continuing to watch the apparition, I instinctively grasped more firmly the right hand of Eusapia, which I held in my left hand, resting on the medium's right knee. . . .My neighbour on the right, M. Ebel, also asserted that he saw the materialised hand."

Beside such "spirit hands," sometimes full-body apparitions were seen by multiple observers during sessions with Eusapia Palladino. On page 175 of Volume 7 of the Annals of Psychical Science (1908), we read the following about an apparition seen by multiple witnesses: "A woman of great beauty appeared, who had died two years before...The apparition was perceived by two others present. and returned several times." This could not have been Eusapia herself, who was not beautiful at the time, and apparently could not have been anyone else living, given precautions against fraud taken during such observation sessions.

On page 440 of volume 5 of the Proceedings of the Society for Psychical Research,  we have an account of a daughter who saw an apparition of her mother seven days after her mother died.  The apparition was also seen by a nurse, and by the daughter's father. A few pages later in the same volume, we have accounts of an apparition apparently seen by four people at different times. The first person recognized the apparition (a figure in a white dressing gown) as a particular Mrs. X. The other three persons (in the home of Mrs. X) saw the apparition as a woman in white attire or a figure enveloped in white (pages 442-445).

A 20th century case of an apparition seen by multiple witnesses is reported on page 254 of the book The Gift by Sally Rhine Feather and Michael Schmicke. We read the following (as quoted on page 2 of this paper):

"A woman and her fifteen-year-old daughter had recently moved to California from their previous home in Washington D.C., where they had left the woman’s father very ill. One day not long after moving, they entered the dining room, and to the woman’s great surprise, there stood her father. 'Why Dad, when did you get here?' she exclaimed. At that point, her daughter turned around to look, and she, too, saw the figure of her grandfather, his hand upraised in a gesture of greeting or perhaps blessing, but he slowly faded away, and they both suddenly realized that he was not really in California in their house. Shortly afterward, they received the news that he had died."

Let us now look at some cases when an apparition is seen by many people. One such case is the sighting reported on pages 213-224 of Volume 7 of the Annals of Psychical Science (1908). On page 213 we read this summary of the case:

"Hardly ever before has an apparition been watched by so many witnesses. Among them were several thoughtful and scientificallv-educated men, who carried out the investigation with the greatest exactness and circumspection; and they unanimously came to the conclusion that fraud and deceit must be excluded, the fact of the apparition having been proved undeniably."

"Elisabetha Eslinger, a widow of thirty-nine years of age, from Baurenlautern, was imprisoned in Weinsherg, because of a small offence which was never quite cleared up. Soon afterwards, on Sept. I2th, Diener Mayer reported that the prisoner Eslinger complained of being tormented by a ghost every night."

"In the night of I7th-I8th Sept., Oberamtsrichter Heyd was with Referendar Burger in Eslinger's prison cell, and they convinced themselves of the reality of the ghostly occurrences. The following night similar manifestations took place at the house of Oheramtsrichter Eckhardt, who had previously asked Eslinger to send the phantom to him. Again, in the course of December, six female and five newly-arrived male prisoners became witnesses of the apparition....Dr. Kerner's son passed the night of Dec. 26th-27th in a cell of the prison, and he, too, perceived the strange phenomena."

This Dr. Kerner pleaded for an investigation into the phenomenon. As a result, even more witnesses were involved:

"In consequence of this decision, the strange manifestations came under the observation of the following people: Professor Kapff, Kupferstecher Dullenhofer, Maler Wagner, Pfarrer Stookmayer, Rechtsanwalt Frass, Dr. Med. Sicherer, Baron Hugel von Eschenau, Pfarrer Meguin, Dr. Med. Kerner, Dr. Med. Seyffer, Oberamtsrichter Hevd-all of whom found themselves obliged to admit the truth of the occurrences. Besides this most valuable evidence, there is also that of Diener Mayer, of the soldier Krust and of three male prisoners, all of whom during the night of Jan. 13th-14th, 1836 (at a time, therefore, when Eslinger was no longer in the prison), witnessed these ghost-phenomena and bore testimony to them."

The apparition was apparently not only seen in a prison cell, but also in the houses of multiple people. We read the following:

"On several nights, between Dec. I9th, 1835, and Jan. 28th, 1836, the phantom appeared, invited and uninvited, in far-off houses, even in Heilbronn, which is three-quarters of a German mile distant, and made itself perceptible in the same way as in the prison."

We are given the exact names and dates relating to those who received these "phantom visitations."  We read the following: 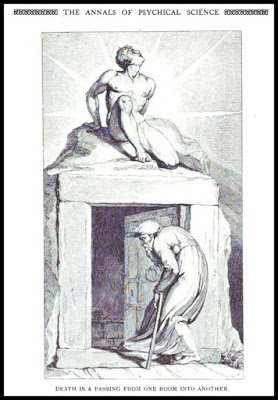 Artwork by William Blake
Posted by Mark Mahin at 7:39 AM