Is "Ignore All Improbabilities" the New Rule of Astrobiologists?

Intelligent life may be common in the universe if there is some teleology driving its appearance. But if there is no such teleology, the odds are very, very poor. Among the many improbabilities involved in intelligent life accidentally appearing on another planet are the following:

A few weeks later there appeared another paper estimating the chance of extraterrestrial civilizations. The paper by Tom Westby and Christopher J. Conselice (entitled "The Astrobiological Copernican Weak and Strong Limits for Intelligent Life") also seemed to follow an approach paying no attention to biological unlikelihoods. Again, we have a paper estimating the chance of extraterrestrial life that fails to use the word "cell" or "protein" or "complexity" or "DNA" or "genome."

Of course, such a principle is ludicrous. If you have reason to believe that very unlikely luck occurred, you have no business assuming that such luck would always occur. If you fall out of a high-flying airplane, and luckily land safely on a haystack, it would be absurd for you to assume that other people falling out of airplanes must have the same luck you had.  And if you are lucky enough to win 100 million dollars after buying five $1 lottery tickets, you would be foolish to think that anyone buying five $1 lottery tickets will have the same luck you had.

Charles Darwin's works paid no real attention to improbabilities. He simply evoked some principle he called survival of the fittest or natural selection, and assumed that such a principle (along with a principle of "sexual selection") could explain almost all wonders of biology, without calculating the improbabilities involved. In the nineteenth century you could try to justify such ignoring of improbabilities by claiming that it is too hard to calculate the odds of biological innovations.

However, by about the middle of the twentieth century scientists had learned enough to have a good mathematical basis for calculating some of the improbabilities involved if an accidental biological innovation were to occur.  Scientists learned that the basic building blocks of cells are protein molecules, and that such molecules are typically built from hundreds of amino acids.  Humans have more than 20,000 different types of protein molecules, each fine-tuned to serve some particular function.  There are twenty types of amino acids used by living things.  The twenty types of amino acids are like the twenty six letters of the alphabet, and a protein molecule is like some functional paragraph.

The median number of amino acids in a protein molecule has been calculated as 361. Referring to random tiny changes in the amino acids in a protein (mutations), a scientific paper stated, "We predict 27–29% of amino acid changing (nonsynonymous) mutations are neutral or nearly neutral (|s|<0.01%), 30–42% are moderately deleterious (0.01%<|s|<1%), and nearly all the remainder are highly deleterious or lethal (|s|>1%).”  This amounts to an estimate that a random change to the amino acid sequence of a protein has about a 30% chance of breaking the protein's functionality. Similarly, the paper "Protein tolerance to random amino acid change" suggests that a random mutation will have about a 34% chance of breaking the functionality of a protein molecule in which it occurs.

So for you to get a functional protein molecule by chance requires a miracle of luck. The odds of it are so small that we should never expect it to occur by chance even given billions of years of random chemical combinations.  If we are to believe that earthly life has appeared through accidental processes, we must believe that such a miracle of luck has occurred not just once, but many millions of different times. For in the animal kingdom there are many millions of different types of protein molecules, each a complex invention serving a different function.

This is only one of innumerable cases in which improbability calculations indicate that prevailing biological explanations cannot be correct.  Those who teach such explanations ignore such difficulties by typically following an "ignore all improbabilities" policy.


The lack of relevant probability calculations by Darwinist professors bothered the eminent physicist Wolfgang Pauli, discoverer of the subatomic Pauli Exclusion Principle on which our existence depends. Pauli stated the following:

"I should like to critically object that this model has not been supported by an affirmative estimate of probabilities so far. Such an estimate of the theoretical time scale of evolution as implied by the model should be compared with the empirical time scale. One would need to show that, according to the assumed model, the probability of de facto existing purposeful features to evolve was sufficiently high on the empirically known time scale. Such an estimate has nowhere been attempted though."

Pauli also stated the following about Darwinist biologists:
“In discussions with biologists I met large difficulties when they apply the concept of ‘natural selection’ in a rather wide field, without being able to estimate the probability of the occurrence in a empirically given time of just those events, which have been important for the biological evolution. Treating the empirical time scale of the evolution theoretically as infinity they have then an easy game, apparently to avoid the concept of purposesiveness. While they pretend to stay in this way completely ‘scientific’ and ‘rational’, they become actually very irrational, particularly because they use the word ‘chance’, not any longer combined with estimations of a mathematically defined probability, in its application to very rare single events more or less synonymous with the old word ‘miracle’.”


Were our biology professors to start paying adequate attention to probability, they would acknowledge the very important principle that the improbability of a complex innovation appearing accidentally usually rises exponentially and geometrically as the number of parts needed for that innovation undergoes a simple linear increase,  in most cases when a special arrangement of the parts is required. Similarly, the improbability of you throwing a handful of cards into the air and having them all form into a house of cards will rise exponentially and geometrically as the number of cards in your hand undergoes a simple linear increase.  Getting a two-card house of cards by accident isn't too hard, by having two cards lean together diagonally. But if all the humans in the world spent their whole lives throwing a deck of cards into the air, none of these random throws would ever produce a 40-card house of cards by accident.  Similarly, the improbability of a typing monkey producing a functionally useful 100-word paragraph is not merely 100 times greater than the improbability of the typing monkey producing an English word; the improbability is more than quadrillions of times greater.

Because the improbability of a complex innovation appearing accidentally usually rises exponentially and geometrically as the number of parts needed for that innovation undergoes a simple linear increase, in most cases when a special arrangement of the parts is needed,   fine-tuned protein molecules consisting of hundreds of amino acids arranged in just the right way to achieve a functional effect are accidentally unachievable. The infinitely more complex arrangements of matter in cells and DNA molecules are also accidentally unachievable.  No machines in any conceivable factory could ever assemble molecule by molecule the functional intricacy of a human organism. The fine-tuned biochemistry of living things is functionality more complex than any machine humans have ever built. The visual below helps to illustrate why it makes no sense to believe that such immensely organized arrangements of matter appeared because of accumulations of random mutations. 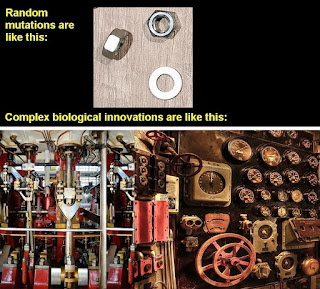 If it were true that Earth-sized planets in the habitable zone tended to be as fortunate as Earth in regard to intelligent life appearing, our galaxy would be teeming with intelligent life, and would probably have many millions of civilizations. Intelligent life  on some planets would become extinct, but the tendency of long-lived civilizations to spread around to other planets and solar systems would tend to make up for such extinctions. But 60 years of attempts to detect signals or signs of other civilizations in our galaxy have been completely unsuccessful.  This suggests that the kind of wildly optimistic assumptions made by Westby and Conselice are not correct.  Westby and Conselice seem to be ignoring not only biology, but also the history of the search for extraterrestrial intelligence.

Postscript: Another science paper similar to the two papers I mentioned regarding the fragility of protein molecules is the paper "Robustness–epistasis link shapes the fitness landscape of a randomly drifting protein," which you can read here.  Figure 1 of the paper has a graph suggesting that the fitness of a protein molecule will decline by about 80% after 4 random mutations, and that the molecule will have no fitness (and become useless) after about 12 mutations.  Since eukaryotic proteins have a median amino acid length of about 360, that 12 mutations is a mere 3% of the amino acid sequence. The amino acid sequences in proteins are comparable to the sequences of letters in a functional paragraph, but the protein molecule is more sensitive to changes than the paragraph.  A paragraph will become unintelligible and useless after about 10% of its characters are randomly changed, but a smaller change in a protein molecule will be enough to make it useless. Protein molecules seem to be almost as sensitive to random changes as computer code. Making random changes in only a very small percent of the characters in a computer program will cause the whole program to become nonfunctional because the code is rejected by the compiler that reads it.
Posted by Mark Mahin at 8:07 AM